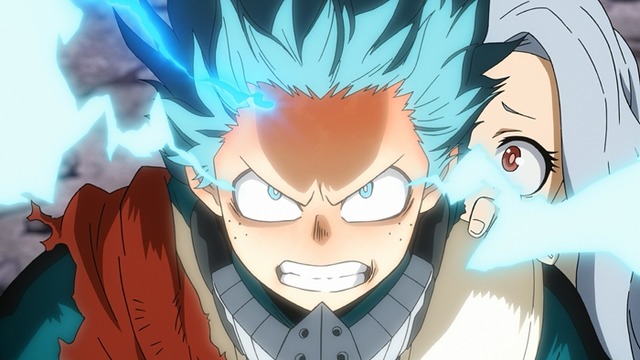 Hot off the heels of last week’s episode (which I didn’t review…), My Hero Academia is back with what is probably it’s most epic episode this season! As a quick recap, we’ll just not the most important key moments from Episode 75.

Mirio is down and out, Sir Nighteye is down and out, nearly on the brink of death after failing to help stop Overhaul. He uses his Foresight to see the inevitable future. The death of Mirio, Deku, and himself as Overhaul gets away. Let’s remember that part, ok? Also, Eraserhead is captured, and Deku is severely injured. Still with me? Good.

As I mentioned in a review about 2-3 weeks ago, we started getting more of Overhaul’s backstory. I put a pin in that because it seemed like there would be more to come and I personally wanted to see more before I critiqued what was initially presented. This week we got a huge chunk of backstory and while it seems like Overhaul is defeated, it certainly feels like there’s more story to tell with him at least. I digress.

While learning about Overhaul’s past, but we also learn about Eri and her grandfather. To me, it seems like this old man is also Overhaul’s grandfather so I can see why he tasked Chisaki with taking care of Eri, essentially raising her. We learn that Eri’s mother abandoned her in the process because she is “cursed”, a conclusion Eri’s mother comes to because Eri accidentally used her quirk on her dad and essentially reverted him into nothingness. Eri’s grandfather tasks Overhaul to investigate Eri’s quirk ability as its a rarely mutated quirk.

Overhaul becomes disturbingly obsessive in his study of Eri. Constantly dissecting her and eventually using her flesh to make the drugs that both boosts and stops quirks. This is why I feel like there’s more to story to tell when it comes to Overhaul’s backstory. While his plan has been the same since way back when using that as a means to show gratitude to someone seemed redundant. All in all, Chisaki is very passionate in his ways but very possessive and obsessive. I can understand wanting to put the Yakuza back in the limelight and wanting the shut the Pro Heros down (this all has to tie back to All Might eventually…right?), I still don’t understand nor really liked his over obsession with Eri.

Getting back on track, we finally get the showdown we have all been waiting for. Mano y mano. Deku vs Overhaul. Overhaul is at max power and Deku is using One For All at 100%, courtesy of Eri and her quirk, which reverses all the effects of One For All. This fight was simply EPIC. The way Deku looks using One For All at 100% is beautiful! I need more of Deku using One For All at 100%, without Eri if possible, which we all know isn’t possible…..yet! We also learn that Sir Nighteye’s Foresight isn’t as accurate as he thinks it might be. In his Foresight, he saw the battle between Overhaul and Deku outside the Hissaikai stronghold. In this battle, Deku would be killed and Overhaul would escape, meaning that his plans to get Eri back and mass produce this drug to bring the Yakuza back into the fold of ruling Japan from the shadows would be a total success.

It begs to ask though, now that we KNOW that Sir Nighteye’s Foresight CAN be changed. How will this affect his relationship with All Might? Will All Might still die, or will that foreseen future for All Might still come to pass?

Overall this is the episode we’ve been waiting all season for. I still feel like we should’ve gotten here a little quicker, the excessive use of buildup hurt a little in the long run, especially when every single episode ends on a frustrating cliffhanger, that isn’t necessarily closing anything out. This episode is no exception to any of that. Still a truly epic episode but I still have to point out those nitpicks.

The heroes will be regrouping and resting it seems in next week’s episode as the season now heads into the School Festival Arc.

Overall this is the episode we've been waiting all season for. I still feel like we should've gotten here a little quicker, the excessive use of buildup hurt a little in the long run, especially when every single episode ends on a frustrating cliffhanger, that isn't necessarily closing anything out.

Osvaldo MaderaJanuary 11, 2020Overall this is the episode we've been waiting all season for. I still feel like we should've gotten here a little quicker, the excessive use of buildup hurt a little in the long run, especially when every single episode ends on a frustrating cliffhanger, that isn't necessarily closing anything out.9.5110
Your RatingUser Rating: 3.8 ( 4 Votes )
Share

REPORT: THE HAWKEYE DISNEY+ SERIES HAS BEEN DELAYED Next post