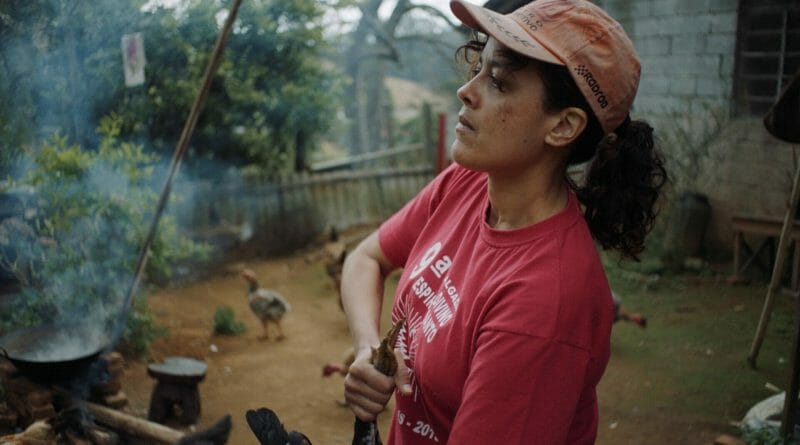 
Charcoal chronicles the life of this Brazilian family who, in their desperation, decide to kill their elder and replace him with an Argentinian drug lord who urgently needs shelter.

There’s a point very early on in writer-director Carolina Markowicz’s debut film Charcoal where I found myself baffled by how crass and horribly earnest the new nurse (Aline Marta Maia) who came by to treat Irene’s (Maeve Jinkings) father was. Irene was innocently explaining how she hoped he could get better and the nurse just snapped back telling her that basically, he was whittling away every second he spent on that bed.

It took me by surprise because at that point it felt more like a gritty and realistic art house movie about the mundane and tragic life of these Brazilian farmers. But instead, the movie took a sharp turn and just careened off into the abyss. Does it work and does this sharp tonal shift effectively bring something different to the table? Sort of, the mileage may vary.

Charcoal chronicles the life of this Brazilian family who, in their desperation, decide to kill their elder and replace him with an Argentinian drug lord who urgently needs shelter. This sets off a chain of wild events where the family becomes undone and starts to let themselves go upon the arrival of their new guest.

All the while they are struggling with the knowledge that they can be found out at any point and have to confront their horrible crime head-on. The premise and the way it slowly unfolds always made me question the intent. The film decidedly plays it very straight, evoking the tone and visceral cinematography one attributes to ‘international’ art house cinema that tackles similar settings and concepts.

The plot and the dialogue swerve more into a weird Coen Brothers territory, but still seemingly playing it straight. Obviously, this is very intentional, but it makes me wonder what’s the purpose, beyond some of the themes I picked up along the way. The way it tackles the social commentary of rich vs poor was effective, showcasing the rotten nature money can bring to a family’s doorstep, especially dirty money, and how easily it can corrupt the soul. The idea of abusing people in need is also very apparent and clear.

There are notions of sexual frustration that linger, but I never see much clarity or understanding as to why they are here and how they factor into the grand thesis Markowicz is trying to showcase here. It’s understandable that the wife of the family is unloved, brushed aside, and unappreciated in her own household, which as a result makes her live the fantasy of having an affair with a mysterious drug lord. So perhaps that’s what the director is going for, channeling the frustrations and injustices the matriarchs face on a day-to-day basis and how they have to endure so much from so many people.

Irene, the head matriarch is played pretty layered by Maeve Jinkings, as a woman who is ignored, and sidelined but capable and independent. She has a pretty great deadpan delivery in the very surreal and satirical scenes but also plays the overworked mother and wife realistically as well. She has interesting chemistry with Miguel (César Bordón), the drug lord. Bordón effectively channels an elder crime boss who has a small heart of gold, as he creates a kinship with the nine-year-old boy Jean (Jean Costa). Miguel has the best lines and clearly had fun with the role, going from brooding to passively funny from scene to scene.

Jairo (Rômulo Braga) plays the father of the family and does an appropriate job as a man who is distant, lazy, and uncaring for his supposed loved ones. A pretty maniacal stand-out is the dubious nurse played by Aline Marta Maia. She’s not in the movie a lot, but she has an aura of cruelness and darkness that even overshadows the drug lord in the film itself. It’s fascinating to watch her glaring and just observing as this family is on the brink of chaos, and how she just soaks it all in and leaves them in shambles constantly.

The cinematography is evocative and pretty beautiful, the vistas and the close-ups sell a consistent mood and feeling throughout the movie. There’s a texture to it, and some shots feel even picturesque, showcasing this Brazilian countryside as raw and realistic as possible. The sound design works at placing the audience in the setting, with the clucking of the chickens and another assortment of animals on the farm. The technical aspects of Charcoal are efficient and precise in order to fully integrate you into this world.

My issues lie in the end with intent. If the slowly overarching absurdism the film conveys works for the audience, then you will come out enjoying this wacky voyage. As for me, I wasn’t totally invested in their plight or their journey. There were moments where I found it intriguing, funny, or insightful, but there were just moments, nothing that kept me hooked consistently as the story developed. The bizarre nature of this tale just wasn’t engaging enough, it lacked a center, and it was missing something to tie it all together.