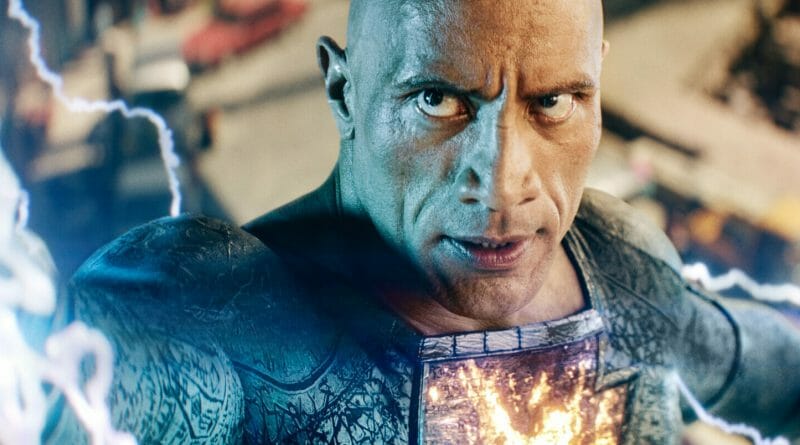 ‘Black Adam’ Review: The Hierarchy of Power Might Shift


It’s been well over a decade since Dwayne “The Rock” Johnson was cast as the villain turned anti-hero Black Adam. During this time both the status quo of comic book films and even him as an actor has evolved and shifted massively. Back then he was just entering into a potential solo movie, in a world where the DCEU wasn’t fully formed yet, but now he’s part of an interconnective and, depending on who you ask, failing, DC Cinematic Universe. He made a promise back in 2020, during the height of the pandemic that The hierarchy of power in the DC universe is about to change. While he may not have made good on that promise from two years ago while on the screen, his work behind the scenes indicates just that.

‘Black Adam’ stars Dwayne ‘The Rock’ Johnson as the titular Man in Black, awakening from a 5,000-year-old slumber by a desperate Adrianna Tomaz (Sarah Shahi), has to undergo a journey from a vengeful and angry god to a savior of the people. All the while he has to face the Justice Society of America, composed of Hawkman (Aldis Hodge), Dr. Fate (Pierce Brosnan), Atom Smasher (Noah Centineo), and Cyclone (Quintessa Swindell).

An idea that The Rock wants to portray with Black Adam is that he wants to use this film as a sort of soft reboot to the greater DCEU. He’s mentioned this before in a tweet. The fascinating thing is how much the creatives behind the camera utilize a lot of what came before within this universe, mainly, using the aesthetics, mood, and tone from the original DCEU architect, Zack Snyder.

It’s pretty inevitable that The Rock, in the pursuit of trying to re-introduce this universe or craft the path forward, had the keen insight to use what worked and made the DCEU unique in the first place, the darker and moodier tone established by Snyder. From the costume design to the darker story about an anti-hero born from rage and hatred, to the stylized action sequences and even visual homages to comic book panels, director Jaume Collet-Serra smartly decided to take from Snyder’s established aesthetic to infuse it with his own sensibilities to ease the audience into this potential reboot of the DC universe.

The movie is not too profound with its lofty ideas, it does well enough to set the premises and follow through with them, but not push further than what it needs to in this very tight and concise 2-hour movie. The two concepts that stand out are how colonialism and imperialism can affect marginalized countries and how sometimes it takes more than the judicial system to destroy our oppressors.

It’s interesting to see how within the DCEU, our heroes don’t seem to be doing their best to help around the world, and the irony of how the Justice Society of AMERICA comes down and tries to stop Black Adam from killing people when it seems like he’s the only one stopping the terrorist group in this film called Intergang is golden. These themes are handled decently enough to get their point across, but never anything to sink your teeth into or use for introspection after the credits roll around.

The references to the larger world are welcomed and appreciated. I was worried that Black Adam wouldn’t tie up at all with Zachary Levy’s Shazam, but I’m glad I was proven wrong since we get to see the wizard Shazam (Djimon Hounsou) as the only survivor from Teth Adam’s rage. This in turn lines up perfectly by the time we get introduced to Billy Baston in Shazam!, as the wizard is a little reluctant to give his powers since he knew what happened last time the crafted a champion. Another substantial addition is Viola Davis playing the perfectly casted Amanda Waller.

She was born to play this role and she still portrays a pitch-perfect comic book-accurate interpretation of the character. Both their roles are minimal but appreciated as a sign of goodwill and determination to push this universe forward. The action is very stylized, utilizing clean slow-motion shots and booming dynamic cinematography and VFX. It’s very fun to see it on a big screen and it’s very engraving and entertaining. You can feel Teth Adam’s power in the film, and you have a sense of scale and power differentials when it comes to the rest of the JSA.  Hawkman and Dr. Fate are both stand-outs, with Dr. Fate edging out in this category.

The film does its best, although very lazy and truncated, to slightly introduce these characters to mainstream audiences in a quick way to progress the plot forward. I didn’t think it was handled in the best way possible though. While I was able to fill in the blanks with these characters since I know their comic book backstory, most audiences will not have a general idea of who they are or what their character’s motivations are.

I think it was a missed opportunity not to have either more screen time devoted to properly introducing these characters or just having them in a solo movie to explore their backstories with the proper amount of time. Aldis Hodge made his Haqwkman feel unique and his own, and it had a cool vibe to his interpretation of the character that I want to see more of in a future film. Pierce Brosnan embodied both a wise Kent Nelson and a magically powerful and near-unstoppable Doctor Fate. Both Atom Smasher and Cyclone have a little more character development, but it’s just inklings of what could potentially be explored in a subsequent JSA film. They did their best with what they were given, but I did wish they had more to do in the plot overall.

The antagonist, Sabbac (Marwan Kenzari) was completely forgettable and uninteresting, the screenwriters tried their best to tie the villain to the main themes and backstory of ‘Black Adam’ but it felt ineffective and lazy. The creatives clearly only stuck him to have an actual villain for all the heroes to join together and defeat by the third act, and it’s a missed opportunity because this could have just been about Black Adam versus the Justice Society of America and that would have worked perfectly well, but I digress.

The superhero suits were excellent and were consistent with the established DCEU aesthetic. The powers showcased on screen were also engaging to see, and were engrossing all around. Doctor Fate’s magical powers rival what Marvel does with Doctor Strange’s powers and Black Adam’s lightning and sheer strength rivals that of our own DCEU’s Shazam and Superman. Speaking of Superman, the mid-credits scene sees the return of Henry Cavill as the Man of Steel. At the time of the publication of this review, Cavill has taken to social media to confirm his return to the DCEU as Clark Kent/Superman.

Generally, I wouldn’t dig too deep into a mid-credit scene of a movie for review purposes, but I think it should be discussed since it provides a promise from Dwyane Johnson that he’s attentive to what the audience and mainly fans wish to see, and in this case is Henry Cavill’s Superman. It’s a simple scene, only serving more as a delivery on a vow The Rock made a while back to bring back Superman than anything visually interesting or engaging. I appreciate Johnson’s attitude and energy in bringing all these elements to the fans and to the audiences. It feels a little refreshing having a creator give what the fans want, although I don’t feel that it should always be the case, sometimes it’s comforting getting to see these visuals and these iconographies on the big screen.

Does ‘Black Adam’ deliver? It delivers a pledge, an idea of an interconnected universe that will use what came before it, that being Zack Snyder’s blueprint, and look into the future of what it could be. The film is a fun ride that you ultimately won’t remember clearly in a few months, but the idea of what this movie could bring forth in the future is what genuinely excites me more than anything else.