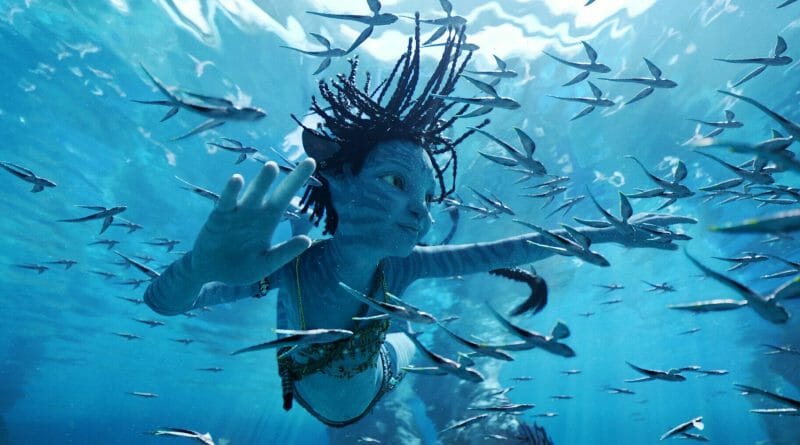 
In the end, Avatar: The Way of Water Never Goes Above and Beyond

It’s been 13 years and multiple technological advancements since our introduction to James Cameron’s multi-billion dollar blockbuster Avatar, where we were introduced to the humanoid blue aliens called the Na’vi who inhabit a similar-ish looking planet Earth named Pandora. We followed the paraplegic marine Jake Sully (Sam Worthington) as he learned via his avatar to live amongst the alien tribe and learn to become one of them.

Cameron took a decade for his follow-up citing that one of the reasons was that he needed to invest in new underwater technology to be able to film his subsequent sequels. After such a long time since our last trip to Pandora, and seeing how the blockbuster landscape has shifted so much? Perhaps in terms of the technological leaps it provides, it might be worth it, but it’s borderline inexcusable in terms of its narrative.

Avatar: The Way of Water follows Jake Sully and Neytiri (Zoe Saldaña) right after the events of the first Avatar, where they start building a family and become part of the Na’vi tribe. All of this changes when humans come with stronger technology to decimate their tribe and occupy their terrain. Even ghosts from the past come back to haunt Jake Sully when it’s revealed that Colonel Miles Quaritch (Stephen Lang) comes back as a Recombinant, which is an avatar implanted with the memories of a human, to exact revenge on Sully and Neytiri.

These events thrust Sully and his family to escape to the east, towards the water tribe, and live amongst them and learn the way of the water, so to speak. I’ve never understood the general appeal of Avatar beyond what it provided for the theatrical experience in terms of scope and technological advancements. The character arc of Jake Sully didn’t appeal to me and I always felt it to be a rehash of films such as The Last of the Mohicans and Pocahontas to name a few.

However, I accepted it for all these flaws because of the understanding that James Cameron had the monumental task of immersing the audience into this new world, and that required a simple and easygoing story in order for the audience not to get lost in the shuffle and be engrossed in the scope, vistas and epic scale. Now going into its sequel; the expectation was that this would include the proper building blocks in terms of narrative and character arcs, but alas, James Cameron just falls back into his comfort zone to provide a functional and thin story to justify its existence.

Half of the plot is rethreading the same structure of the main character discovering a brand new culture, this time it’s Jake Sully’s son Lo’ak (Britain Dalton) who has to learn about the Metkayina tribe and how they live on the island. The other half is a story about family and perseverance in the face of danger. It becomes very frustrating because even though this new section of Pandora is fascinating to see, and to a certain extent engrossing to watch and experience, especially in IMAX 3D, it can grow very tiring very quickly.

So when all you have left is a plot you’ve already seen before within the same franchise blended with something akin to a film from The Fast and Furious franchise, then you begin to wonder if this is the best Cameron could come up with in 13 years. Even the film’s MacGuffin is just a variation on unobtanium from the first film, this time around is a liquid that is extracted from this whale-like creature called the Tulkun. But it is the primary reason why the humans are back at Pandora and is the material that pays for all their research and technology.

Obviously, not everything is a total misfire. One cannot deny how impressive the visual effects are in this film, clearly showcasing what can be done in the digital landscape. It’s very apparent this was the focus of Cameron, to be able to explore this new side of Pandora with his new tools at his disposal. The water simulations look fantastic, and have obviously been improved in the last decade or so, to the point where you might start to wonder if it’s real or CGI. Some of the creature designs aren’t incredibly inspired but seem to fit the world of Pandora surprisingly well.

The Metkayina tribe has slight variations to the Na’vi we saw in the first film, their skin color is a lighter shade of blue and their arms and tails are stronger because they have to utilize them to swim. The reef tribe also has their own variation on the Mountain Banshees, called the Skimwings, which are flying creatures except they submerge their tails in the water to use as a propulsor. And even though the Skimwings don’t necessarily form a deep bond like the Mountain Banshees did in the first film, the sequel introduced the Tulkun who are the creatures that form bonds with the Na’vi.

The vistas and the general scale is apparent and improved from the first outing. The textures and how the characters look, where it blends their likeness with the Na’vi’s features are perfectly done. It’s very seamless and for the most part believable. On top of the movie being displayed in 3D, it also utilized HFR, also known as high frame rate. The film was projected at 48 frames per second instead of the usual cinematic 24 frames per second. The results are sadly mixed.

The 48 fps helps you sell the illusion when it comes to the water sequences since it presents it in such a fluid and realistic way that it seems like a scene straight out of docu-series Planet Earth. But the frame rate is not consistent throughout the whole three-hour long running time. The fps would arbitrarily dip, creating an uneven experience and taking you off of the immersive angle Cameron was probably going for. It might seem like they did this during the dialogue sequences, but it’s very clear that this is the case.

It could have been my screening that had this issue, but I’ve seen some people on social media also voice this concern during their screening, so beware when going to see this film in IMAX 3D. The fight sequences are also visually impressive, showing you how far visual effects have gone in the last few years.

But the climactic sequence lasted a bit too long for my taste, getting to a point where it felt like sensory overload. In general, the film succeeds in being an experience that will probably be best seen on the big screen, showcasing all the advancements Cameron and his crew have achieved. The main theme that Cameron explores through the film, however, feels hamfisted and very anemic.

It’s obvious that the natural progression of this franchise included bringing a new cast of characters to carry the franchise forward, considering there are going to be a few more films in this universe down the line. As a result, the theme that had to be front and center had to deal with family, and how you navigate the intricate and complex dynamics that come with it. Cameron didn’t seem like he thought this idea through since it felt like he shoehorned in many characters and circumstances to make this theme function in the overall narrative.

Even though Jake Sully and his need to protect and care for his family feels like a natural next step in his journey, the introduction of Kiri (Sigourney Weaver), as an adopted daughter of Jake and Neytiri and the actual daughter of Dr. Grace Augustine, and Miles ‘Spider’ Socorro (Jack Champion) as the secret son of Colonel Miles Quaritch, just feel like truncated inclusions to make the theme stick.

James Cameron tries to draw parental parallels between Jake Sully and Miles Quaritch but it fails to work, since you never get a sense of growth on the part of Miles, although perhaps the idea is to plant the seeds for subsequent sequels, if the point was to make me empathize to some degree with the antagonist of the piece it failed spectacularly.

Even Kiri is wasted in this film, since the idea of an orphan who yearns to know more about their past is wasted by baiting the audience with answers in future sequels, leaving the character with not much to do for the majority of the film, except be a Deux ex Machina for the climactic battle in the third act.

The third act blended a lot of James Cameron’s magic tricks, harkening back to sequences from Titanic, Terminator 2, and The Abyss to name a few. It felt very familiar, like playing the greatest hits of a director’s filmography, with better video game graphics. It’s not entirely soulless, although it gets surprisingly close. It seemed almost unavoidable for a director known for his fascination with water to have sequences similar to his earlier works, but you’d think that because of this reason he’d be a tad more creative with the end result. But in the end, it never goes above and beyond.

The performance by the cast is workable given what they had to work with, but no one really stands out. The plot doesn’t give them much to do, although their physicality is on clear display, and feels like they all did these motion capture performances. They do act like they are swimming in these deep oceans, fighting the humans, and riding these massive beasts. Their facial expressions are believable even though I never really felt anything for them. But all in all, they worked for what they were needed for.

Avatar: The Way of Water didn’t convert me into a follower of Pandora or its characters, but I can see how it can be for others who loved the first entry. The film is bigger, larger, and grander in scope. The technical achievements cannot be denied by anyone and it’ll be interesting to see how Cameron pushes the boundaries in terms of visual effects and underwater cinematography. But as a film whose goal is for the audience to care and be involved in the story and its characters, it failed in that regard. Nevertheless, if you loved the first one, you’ll love this one. If not, there are many other films released in 2022 that leave a bigger emotional mark than this one does.

Avatar: The Way of Water is now playing in theaters.