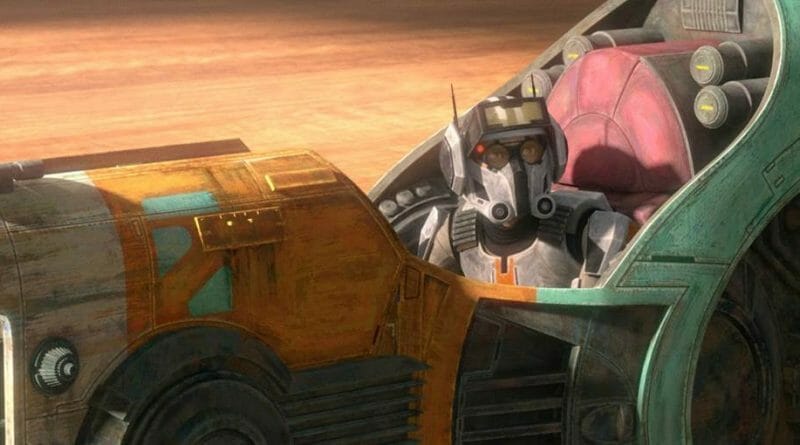 
Hope you all have a need for speed because the Bad Batch is going racing!

Welcome back to the Basement my nerdy friends, this recent episode of The Bad Batch ‘Faster’ has actually slowed down the pacing a bit for a needed reprieve from the major story plot points. But who ever complained about the introduction to a brand new racing spectacle in the Star Wars universe?! Not me that’s for sure. It’s always good for these episodes to come earlier rather than later in a season in my opinion, especially with a series like this one with so much to offer.

Now let’s dive into this, while Hunter and Echo are out making a Uber eats delivery for Cid haha (they were delivering nuggets). Cid enlists the remainder of the group Omega, Tech, and Wrecker to play bodyguards for her in the city of Safa Toma. A new location for us to enjoy in the universe, similar to the likes of Tatooine the world hosts our newest installation of sports betting Riot Racing!

Riot Racing as you could guess is similar to the known Pod Racing we know of. But use a modified speeder to participate in the race. It’s a no holds bar spectacle that even the spectators are not safe from potential harm. A very dangerous game to say the least. Were introduced to Cid’s race driver the droid Tay-0 voiced by Ben Schwartz brings his witty energy to the episode and is fun to watch. The cameos this season are starting strong I must say.

The episode focuses on Ciddarin Scaleback (CID) and her old acquaintance Millegi. Their relationship has deeper connections to be assumed but they strictly keep it business at this time. The two then engage in a “usual” wager on their respective racers and as expected our Tay-0 is beaten due to some cheating from Millegi’s crew and things quickly escalate from there. Millegi immediately comes to collect but with some quick thinking from Omega she persuades the self-proclaimed hustler to a double or nothing wager.

Things go as expected after repairing Tay-0 he is coincidentally destroyed again from a “speeder accident” in the pit lol. Which puts Tech in the driver’s seat to save the day. After a cool display of driving skills from Tech, he wins the race and Cid’s freedom. With Cid’s past coming into question by the group this episode is either setting up a chance of redemption for Cid or another reason the Bad Batch is put into another dire situation. With Millegi offering a last foreboding word of advice to the trio they head back home.

And that was pretty much the episode. A new fun droid in Tay-0, The Bad Batch has to navigate their way out of a sticky situation, Tech once again shows us he is not to be trifled with, and some exciting Riot Racing scenes. It’s easy to dismiss this episode as just a filler but this could always come back full circle later on, especially since Cid is a recurring character and she looks to have an issue with her past.

But as I said early on it’s a fun segway off the main storyline and done early enough for my tastes to not diminish the remainder of the season when the good stuff really starts to rev up (saw what I did there).