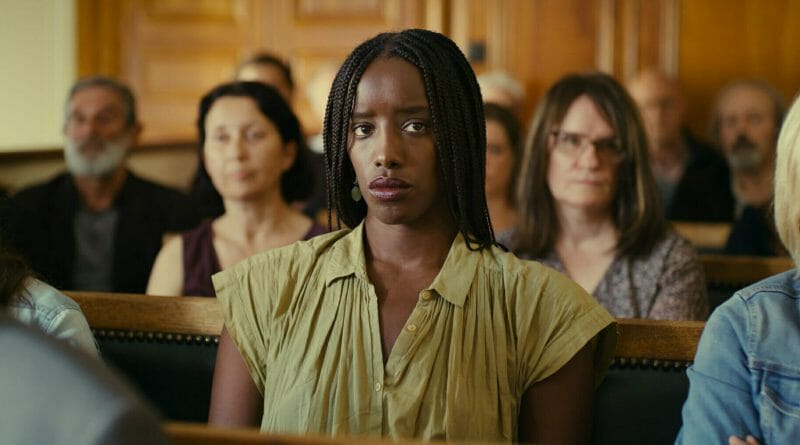 ‘Saint Omer’ Review: Nothing Is Ever As It Seems


“Saint Omer is an exploration of perspectives.”

Motherhood has always been a herculean task that is neither appreciated nor praised as it should be in our society. Motherhood is something that’s taken for granted and only questioned when it’s done incorrectly. With Alice Diop’s first narrative feature, Saint Omer, we get to explore all the facets of motherhood, even the unspeakable aspects that rarely get discussed out in the open.

Saint Omer is loosely based on the 2016 French court case in which Fabienne Kabou got charged with the death of her daughter, who was a year old. Alice Diop, the director, attended the trial and then turned said case into an exploration of empathy, introspection, and catharsis. Diop in turn wrote the narrative of Saint Omer utilizing an alter ego to explore the story.

The movie itself chronicles Rama (Kayije Kagame) a pregnant novelist and academic who persuades her publisher to allow her to go to the trial and write a piece about it since she felt a connection with the accused because of her strained relationship with her own mother and the aforementioned pregnancy. So she heads off to Saint Omer, in France. During the trial, Rama finally listens to Laurence Cody’s (Guslagie Malanda) testimony.

She confesses blatantly that she indeed murdered her daughter, but claims it was because of sorcery that led to her horrific actions. As the days progress Rama starts feeling something very deep at her core, a catharsis at the realization that she might be feeling a connection or an understanding towards Cody and her plight, and she fears that deep down, she might be so different from Laurence Cody after all.

The film is a masterwork of blending reality with fiction since it relies on still camera shots and magnificent long takes to chronicle the gargantuan and horrific testimony Laurence Cody delivered in the courtroom. The testimonies and proceedings feel very real and grounded, taking their time to develop and entrusting the audience to pay attention to the details as they unfold to question our perception of what’s true, and what’s false, and test our moral compass along the way.

Laurence Cody’s cold, subdued and intellectual delivery adds a layer to the chilling monologue since it makes you question how someone like her could end up doing such an abhorrent thing. The slow realization of Rama that she’s feeling a certain kinship and understanding is almost heartbreaking to observe. It’s phenomenal how Diop utilized her own experience and feelings during the actual 2016 trial to put forth the concept of trying to rationalize, humanize and potentially empathize with a murderer.

Is she evil? Is she a product of the culture? Is this someone else’s fault? All these questions and more can arise as you observe Cody giving her life story to the courtroom. Diop effectively shows you how society can turn anyone, even someone as brilliant as Cody, into the worst possible version of ourselves.

The film shows you all the facets of motherhood, from love to neglect and everything in between. Peppered with Rama’s flashbacks to her childhood relationship with her mother, we get an insight into how strained and detached Rama is from her mother, and how she can seemingly understand what could have driven Laurence Cody to end up the way she did since she also shares a parallel with Rama in terms of unrequited love from her mother.

We see the pressures of motherhood through Cody, and how she had to deal with the pregnancy and the childbearing that came after. Kayije Kagame as Rama is very layered and subdued, very minimal but effective since she can do so much with just a glance. She conveys a person in an internal conflict just by her eyes and body movements. How she navigates the internal turmoil and realization is gut-wrenching and sad to see play out. Guslagie Malanda is a revelation.

She’s multilayered and complex, as someone who has to be stoic, controlled, and very sure of what they’re saying. It’s a sight to behold as she goes on for long stretches of time just giving her horrific testimony in a very stern and cold delivery. She dares you to understand her struggle and her rationale. Malanda also shows an emotional core as she breaks down in the courtroom during the climax of the film.

The cinematography is simple but daring, forcing the audience to come to terms with what’s being said front and center, allowing long periods devoted to just the performances as they are laid out. The chamber drama angle of the film being centered in the courtroom gives it a claustrophobic approach to the whole piece. It’s unflinching, crude, and even more powerful. Having minimalist cinematography and setting allows the performances to reign supreme.

Saint Omer is an exploration of perspectives. It places the audience as the jury and forces them to have a nuanced decision on what could ever compel someone to make the most tragic act imaginable. Is it their background? Is it society? Or is it something deeper? Maybe in the end there’s no correct answer.