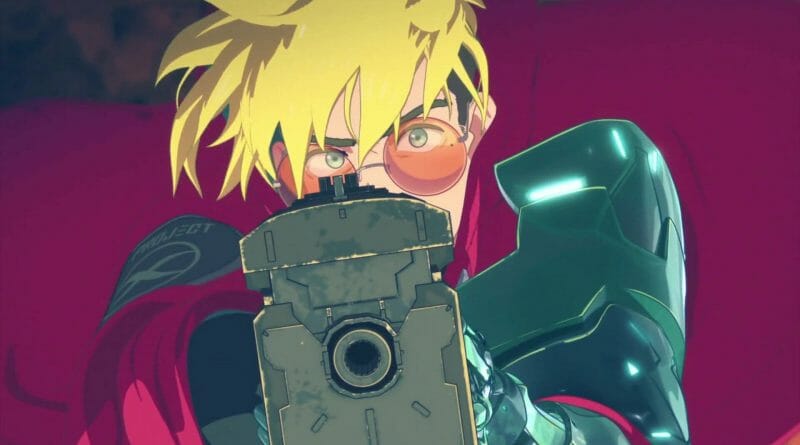 
Trigun Stampede certainly makes a lasting impression with its first episode but if fans were expecting a rehash of the same old story they’re in for a rude awakening because Vash the Stampede is back and reimagined.

Now I’m no big fan of 3D CGI myself but Studio Orange has managed to impress and for anyone else that may have an aversion, I have no doubt they’ll at the very least agree to that much. That being said the debut episode of Trigun Stampede will definitely leave any fan feeling like you just finished watching a blockbuster film. The first episode kicks off by giving you something the original series didn’t, you’re immediately given an early but brief view of Vash’s distant past and how he came to be on the planet he is now. Afterward time fast forwards and the focus shifts to Meryl Stryfe who unlike the original series seems to be a young rookie reporter looking to make her first big scoop.

She’s accompanied by a senior reporter and stereotypical drunk named Roberto De Niro (I’m sure we can all tell where that name came from) but unfortunately in this adaptation, it doesn’t seem that we’ll get to see a newly imagined Milly Thompson (her original sidekick). Though I personally am pretty disappointed about that detail, I am looking forward to observing the new dynamic between Meryl and her “new” superior. The two waste no time locating the man known as “The Humanoid Typhoon” in the classic fashion (by stumbling upon him) and we’re quickly acquainted with the same old goofy Vash albeit with an interesting new design.

Most of the new design isn’t very far off from the original style with the real notable changes being how his missing arm is portrayed and his new hairstyle. While I don’t mind the fresh new hairdo on the character I’m a bit in between myself on the arm design because in the original story, it’s something revealed much later on and it’s mostly kept hidden. That coupled with an early introduction to ”Plants” not long after the character’s arrival to the town of Jenorah Rock is a sign that the show plans on having some fun with the lore of the “Lost Technology”.

Vash quickly ends up in an all too familiar situation when the Julai City Police appear to capture him and he surrenders himself after it’s revealed that the bounty on his head is enough for the town to get their Plant repaired. Upon seeing this Roberto De Niro drunkenly convinces the head officer to challenge Vash to a duel by exploiting their pride and suggesting that they’ll be seen as cowards by people if he doesn’t. This is apparently solely done in Roberto’s interest of getting a good story out of it.

Immediately at the beginning of the duel Vash’s peaceful character is on full display as he attempts to talk his opponent out of the duel and I must give Studio Orange a hat off to this part of the scene because the enemy’s bluff was quite entertaining. The Police Captain briefly agrees with Vash that the entire situation is stupid and puts his gun away only to pull out a rocket launcher instantly firing one into the air and releasing cluster munitions that look to be enough to destroy half the town. Vash looks to take action but we’re met with a familiar scene from the promotional trailer and it looks like he’s out of ammo.

I’m not sure exactly how much time passed before Vash received the only .22 caliber bullet he’d need to remedy the situation but let’s say it was a pretty close call. His local friend Rosa gives Meryl the bullet to throw at him and the Police Captain does his best at attempting to stop him from grabbing it, giving us a small showcase of Vash’s combat skills and some very fluid CGI motion as he promptly incapacitates him. He then proceeds to singlehandedly stop the oncoming rain of cluster bombs by shooting a rock.

I know you think I’m just pulling your leg but no I’m not joking he quite literally grabs a large chunk of rock straight out of the ground, tosses it in the air, and fires causing it to break into several pieces that hit the bombs triggering them in mid-air. I doubt anyone would’ve imagined from the trailer that this is how the incident would be resolved but needless to say, it’s either very entertaining or very ridiculous depending on your personal taste. Regardless the first episode of this reboot does not disappoint; with a mention of Vash’s brother at the end and an ominous musical arrangement accompanying it Studio Orange has done a great job setting the pace for the rest of the series.

Trigun Stampede is now streaming on Crunchyroll with new episodes releasing every Saturday!