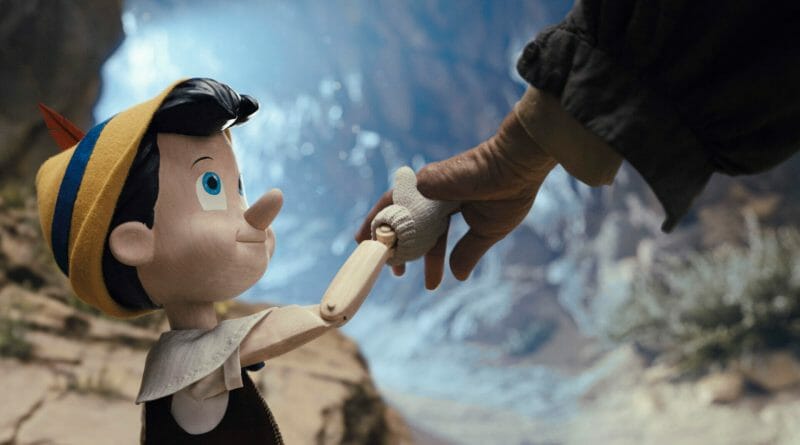 
Watch Pinocchio if you want to see a pretty serviceable remake, one that feels like it has a pulse, and it’s not completely tarnished by the Disney machinery

It’s been a recent practice over the last decade or so for Disney, starting with Cinderella (2015), to remake their beloved animated classics into live action. So it was purely inevitable they’d get to the very early works as an animation studio, and there hasn’t been one that screams classic Disney than this new Pinocchio remake directed by Robert Zemeckis. Out of all of these live-action reinterpretations, this one is one of the few that feels the most earnest and inspired by the original.

It truly feels like it’s from another time period. But everyone under the sun knows the story of Pinocchio by now, a wooden marionette that comes to life and yearns to be a real boy, so he goes on an adventure to prove himself. Does this remake add anything or make the experience worthwhile? I’d say yes, but there are some splinters along the way.

The film opens with the familiar Disney logo and the orchestral rendition of ‘When You Wish Upon A Star’ as it usually does, and already you’re transported to this world, with your familiar cricket singing part of the song and narrating this new adventure. Joseph Gordon-Levitt is pitch-perfect as Jiminy Cricket, really encapsulating all the traits this character is, and his voice work is greatly appreciated since it feels like he’s trying to channel that character and not just phoning it in. There’s even some meta-awareness on the part of the narrator, which even though 2022 standards might overdo it, it’s contextually acceptable here.

Jiminy Cricket tries to find a place to sleep and warmth over the cold night and ends up in Geppetto’s shop. Here we get an introduction to Tom Hanks’ take on the old lonely Italian woodcarver. Hanks does an endearing and a little over-the-top performance as Geppetto, but it’s so delightful you can’t help but accept it and see what he does with the role. This is where we see some differences from the original one, but I feel they add and flesh out the characters more as a result.

In this live-action remake you discover that Geppetto used to have a son and a wife, but he lost them both, it’s never explained why, but you as the audience can probably imagine what could have transpired for him to end up alone. He now has an actual purpose while creating Pinocchio, to act as an avatar of his dead son.

It ultimately makes everything more tragic, and already establishes a stronger bond between Geppetto and Pinocchio from the very beginning. Geppetto goes to sleep and wishes upon a star to make his wooden creation a real boy, and the Blue Fairy (Cynthia Erivo) brings him to life and promises to turn him into a real boy if he proves to be brave, truthful, and unselfish.

Then she entrusts Jiminy to be Pinocchio’s conscience until he develops his own. All pretty much in line with the original. The Blue Fairy doesn’t appear for the rest of the film, but her scene was pretty good, and her rendition of ‘When You Wish Upon A Star was powerful albeit a tad short. Geppetto wakes up and is filled with you at the sight of his dream coming true, and then the plot kicks in, where Pinocchio must now traverse the familiar sequences of the original to learn the three virtues and become a real boy for his father.

An element I truly appreciate in this reimagining is that Benjamin Evan Aiunsworth who voices Pinocchio truly captured the spirit of the character through the voice work, and this Pinocchio really feels empathetic and truly centered on trying to be a good boy and obey his father. He has doubts, and he doesn’t fall easily into his naive nature. An issue I always sort of had is that even in the Disney original, Pinocchio always felt too bratty, selfish, and even a little deviant.

This Pinocchio is sweeter, willing to learn, and attentive, you as the audience can see his consciousness developing throughout the film, and learning as he goes. And all of this is in part to the small changes in the narrative, such as actually listening to Jiminy after his encounter with Honest John (Keegan-Michael Key) and going back to school, and Pinocchio only decides to join the puppet show because he got thrown off the school. After all, he’s not a real boy.

The decision was propelled not because of naiveness like the original, but instead because he felt like an outsider, and wanted to fit in and do right by his father. Small choices such as this I do think elevate the character while still keeping true to the fables each section of the film provides to a younger audience.

Not all the elements of the film work. The CGI is rough at times, and maybe this was part of the decision to dump this film in Disney+ as opposed to a theatrical release. Although it could be argued that it might be really hard to sell you on a Pinocchio film in 2022 since the film itself doesn’t feel ‘hip’ or ‘fresh’ enough to warrant that big tent pole release. The sets look alright, but it’s clear this film is not allotted the same budget that other recent live-action adaptations have received over the last few years. And maybe that was for the best, but as a result, it makes the story feel smaller.

Which ultimately may have worked in its favor. This is also a gigantic nitpick but there’s a sequence, just like in the original, where we see the cuckoo clocks sound off simultaneously. In the original, we get to see some of Geppetto’s creations, very endearing and toy-like. For some reason, and I feel this is just a stupid ridiculous 2022 Hollywood Producer decision, we get to see a bunch of references to other Disney properties instead.

We see a Toy Story cuckoo clock, a Roger Rabbit cuckoo clock, a Donald Duck cuckoo clock, and on and on it goes. What’s worse is they do this scene twice, riddled with ad placements to remind you to check the other content they have in the streaming service once you finish the film. It instantly dated the film for me and ruined the element of it being timeless, like a horrific nasty corporate stain on a piece of art.

The film comments lightly on influencer culture, which I understand why they used this vernacular to explain to children what it means to be famous, but it takes you a little out of it, since this definition of the word is so modern, again taking you out of the setting even if just for a bit.

The ending is only slightly different, but I believe it works effectively based on what the re-interpreted theme is, and it visually hits home. All in all, it’s a nice companion piece to the original, it stays mostly true to the themes and fables of the original, and instead chooses to deepen and layer the character a bit more to give them more substance. The visual effects don’t always work, but people would probably be more forgiving since it’s on a streaming service. Check it out if you want to see a pretty serviceable remake, one that feels like it has a pulse, and it’s not completely tarnished by the Disney machinery.

‘Pinocchio is now streaming on Disney+.