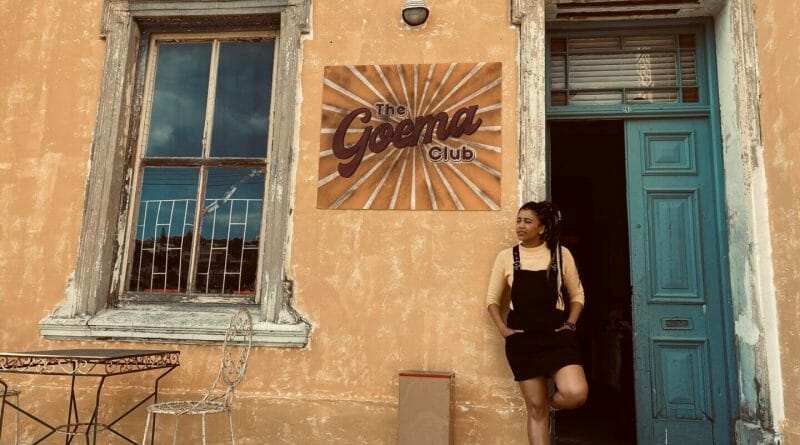 
The Umbrella Men is not designed to be a big over-the-top American Blockbuster, and it’s not even constructed this way, the film instead tries to play to its strengths.

The themes of gentrification, of losing part of your legacy and heritage will always feel so universal to those who witness it first hand or live it on a day-to-day basis. The newest John Baker film is no different in this regard, tackling these ideas head-on engulfed in a fun, comedic heist film in the vein of those expensive Hollywood affairs, but as opposed to those movies, this one has something more to add to the conversation. Even if the setting is in Cape Town, South Africa, it’s impressive how the struggles and the frustrations of losing part of your community can feel so close to home, no matter where you live. That speaks volumes to what was achieved here with “The Umbrella Men”.

‘The Umbrella Men’ is the latest film by the South-African director John Baker, which chronicles Jerome’s (Jaques De Silva) reluctant return to his hometown to bury his estranged father. Before leaving, however, he’s given the Goema Club, his father’s bar, but it’s riddled with a million rand debt. While all this is happening, he rekindles his friendship with Mortimer (Keenan Arrison) and starts developing a relationship with Keisha (Shamilla Miller). Everything goes awry when one of his father’s rivals, Tariq Cupido (Abduragman Adams) threatens his club, his legacy, and the future of his community.

The setting was an ideal location to place the narrative since it happens during the historic Cape Town Minstrel Carnival, which is an event that transpires in a section of Cape Town called Bo-Kaap every year for the last 200 years. In fact, the film starts with archival footage of the said event, setting up the stage and the historical and cultural backdrop that will drive the narrative and thematic force forward.

The festival dates back to the early years of colonization and slavery in Cape Town and this event was one of the few instances in which slaves were allowed the freedom to celebrate, even amongst the colonizers. It’s arguable that, in dealing with the element of gentrification, which can be construed as another form of colonization, there’s a thematic parallel to the real-world event and the plot of the movie itself.

The stakes are laid out pretty quickly and efficiently. It’s quickly understood what the main dilemma is, and how Jerome tries his best to salvage his father’s bar until he’s left with no choice but to inevitably rob a bank. That’s when the plot kicks in and we get acquainted with the rag-tag team that’ll form part of his theft. All the supporting characters are pretty likable and distinct, all driven by various different motives and have their own personal stakes in regards to the caper.

Jaques De Silva gives a compelling performance as the slick, comedic, brooding, and burdened Jerome. Jerome reluctantly doesn’t want to go back to his roots, but as the story progresses feels the need to latch on to whatever’s left of his past and ensure it can be salvaged for a hopeful future. He also has great chemistry with Kennan Arrison and you truly believe they’ve known each other all their lives. They bounce off each other tremendously well and the best scenes are with them on screen. There’s an earnest kinship amongst them that feels genuine.

De Silva in addition connects really well with Shamilla Miller’s Sheila and it feels like a relationship blossoming into something deeper. It’s not the main focus of the movie, but her character adds a different perspective to Jerome’s plight and even pushes against some of the more radical ideas the character has throughout the story.

Sheila is also a pretty strong character, and acts in a very active way through the story too, actually contributing a lot to the plan to rob the bank and even assisting in giving Jerome more incentive to commit to his burglary plan. Abduragman Adams gives a pretty menacing take as the rival troupe leader, channeling an almost Vito Corleone-esque performance but with moments of levity as well.

The movie also has this overarching narrator who acts more of a bystander sort of commenting on the events of the movie sporadically as they occur. It was a very fascinating element, it really made me think a bit about ‘The Last Black Man in San Francisco’, which also had a man on a small soapbox, but in this case, he’s screaming about the contaminated waters. It was a little extra that made the film stand out and added something peculiar to it, because as their story progressed the narrator visually changed, getting better, less nihilistic, and perhaps even more hopeful by the end.

The movie is not designed to be a big over-the-top American Blockbuster, and it’s not even constructed this way, the film instead tries to play to its strengths. In this instance, it relies on pretty compelling and appealing themes, entertaining characters, and lively sequences to hook the audience throughout this journey. The heist sequence was simple, but it was effective and engaging.

It plays the usual tropes, there are some twists and turns, the plan doesn’t go exactly as predicted, and there’s the double and perhaps even a triple crossing along the way. It’s not overtly bombastic, but it doesn’t feel the need it has to be. Where it might lack in one area, it thrives in another, which in this case is the actual festival.

The Cape Town Minstrel Carnival sequence was pretty engrossing, seeing the colors, the visuals, the music, the dancing, and all the cultural elements merging together bring a great sequence and an insightful look at this very very old tradition on display. The Goema music was fantastic, and really adds a unique auditory element that enhances the narrative.

Since Goema sounds like jazz, the movie is drenched in a jazzy moody score, almost channeling early film noirs from back in the day, giving it its own identity and style to the overall piece. ‘The Umbrella Men’ is a pretty straightforward but rich heist film with likable leads, great music, and a pretty effective robbery sequence filled with colors, drenched in Goema and fun hijinks.

‘The Umbrella Men’ had its world premiere this weekend at the Toronto International Film Festival (TIFF 2022).