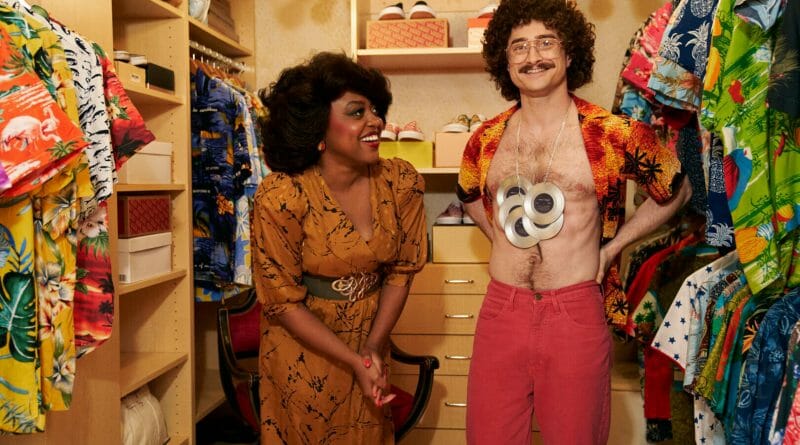 Too bad ‘Weird: The Al Yankovic Story’ will not be supported in theaters by the soulless teaser for ‘I Wanna Dance with Somebody.’ An obvious cash-grab and Oscar bait, the poster for the upcoming Whitney Houston biopic reads: “From the Writers of Bohemian Rhapsody.” Yikes. Despite the fundamental atrocities these big studios pump out willy-nilly, it’s always fun to watch them spin the wheel and see who’s next. Last month it was Marilyn Monroe, next week it’s Whitney Houston, next month it’s Fred Durst of Limp Bizkit, and next year it will be Nelly Furtado. Under the disguise of star-studded spectacles, it’s too often these over-produced, surface-level explorations of fame and art fall short of their promises.

‘Weird’ is exactly what you predicted and asked for: a wacky, perfectly unserious (and untrue) portrait of the most alternatively niche musician, Weird Al Yankovic through the vein of near classics like “Walk Hard: The Dewey Cox Story” and “Popstar: Never Stop Stopping” it’s hard to dismiss its absurdity as demerits. The truth is, Weird has enough gags and hilarious cameos to overlook just about any mistake it may have made. Weird will drop on the D-tier streaming service, The Roku Channel. The fact it won’t get a theatrical release is a bit unfair considering it’s a glaring nose-thumb to glittery and criminally mishandled biopics. Whether it was meant to be seen that way is completely up for argument.

Pills that are hard to swallow: Weird is a much better biopic than Baz Luhrmann’s glitzy undertaking of Elvis Presley. Though Weird lacks a distinct visual language, the film embraces absurdity and ridiculousness instead of being infected by it the way Elvis was. Weird has all the terrible makings of films like “Nina” but the soulfulness of films like “Love and Mercy”. The film’s dedication to its own bent seriousness inadvertently adds layers to the central figure at play. There isn’t a widely known figure as unserious as Weird Al Yankovic and this film is the perfect love letter to him…from himself. We watch him find inspiration for his songs in the most ridiculous ways; in biopics, it’s always this dramatic epiphany when the figure finds inspiration for their biggest hit. I would take the overlong epiphany sequence for “My Bologna” over the wildly corny “Bohemian Rhapsody” sequence in “Bohemian Rhapsody”.

Other pills that are hard to swallow: Daniel Radcliffe is hot as Weird Al Yankovic. I said what I said!

You’ll find a lot of articles on the wild and fruitful post-Harry Potter career of Daniel Radcliffe. A guy with guns for hands, a guy with a north-pointing erection, a guy with horns, the list goes on. It’s true, there hasn’t been a filmography this chaotic since Nicolas Cage (who is still going strong). In Weird, Radcliffe dons the perm, the mustache, the checkered vans, and the accordion, and to be completely honest, I wouldn’t want it any other way. He wears the open Hawaiian shirt with his abs on full display and to be even more honest, it’s a dangerous display of male masculinity and attraction. How can any man match up to this? Putting the sexiness aside, Radcliffe kills it as Yankovic with pitch-perfect timing for comedy and absurdity.

Nobody here doubted Radcliffe was capable of comedy like this but it’s so refreshing to see an actor with the status and career like his have fun in roles like these. Just as chaotically as his filmography, Weird drifts into increasingly wild situations and territories giving Radcliffe an opportunity to play in the gigantic sandbox “Funny or Die” has built him. He navigates a niche alternative parody musician, a creatively stumped songwriter, a gun-toting action star, and an ex-lover of Madonna ALL IN ONE MOVIE.

The film has everything you’d need to make a killer theater experience. Weird held up some true laughs through numerous cameos, full-tilt ridiculousness, and a perfectly executed Daniel Radcliffe casting. We live in a sad world where half-assed biopics are greenlit faster than a “Fast and Furious” film and genuine sincere crowd-pleasers like this are released on lower-level streaming services. No disrespect to The Roku Channel, you guys swallowed Quibi and are just tryna make the best of it. “Top Gun: Maverick” made dads cheer, Elvis made moms squeal, and Weird: The Al Yankovic Story made anti-social, fedora-sporting film critics shed a tear.

‘Weird: The Al Yankovic Story’ is streaming now on The Roku Channel.