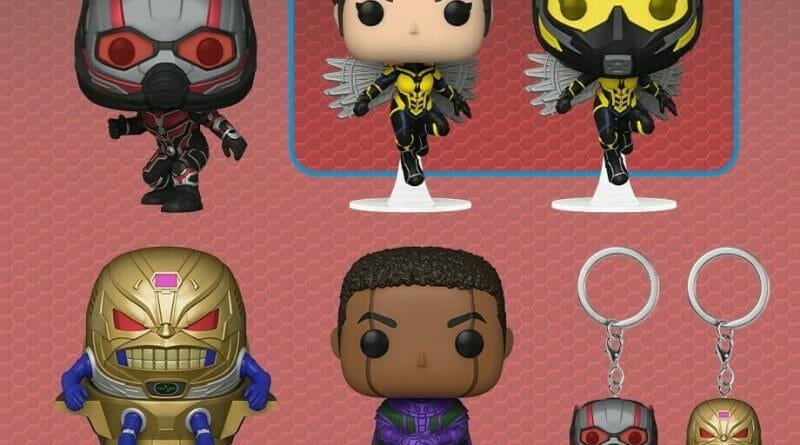 ‘Ant-Man and The Wasp: Quantumania’ Funk Pop Figures Are Available For Pre-Order


We’re still a couple of months away from the theatrical release of Marvel Studios’ “Ant-Man and The Wasp: Quantumania” which will bring forth not just the live-action debut of Jonathan Major’s Kang The Conqueror, but also M.O.D.O.K.; Marvel Studios has already released an official trailer for Ant-Man 3 but unlike the trailer that was showcased at both San Diego Comic-Con and D23 Expo, it did not feature M.O.D.O.K.

We got a good look at M.O.D.O.K. a few weeks ago when a leak appeared on Twitter with MODOK’s Funko Pop figure being spotted at a local retailer, however, today, Funko has officially revealed the first wave of “Ant-Man and The Wasp: Quantumania” Funko Pop Vinyls which you can pre-order using our affiliate links below.

Ant-Man and The Wasp: Quantumania – The Wasp Funko Pop Vinyl

Who is MODOK in Ant-Man And The Wasp: Quantumania?

Details surrounding MODOK’s casting in the MCU still remain under wraps, however, rumor has it that Corey Stoll who played Darren Cross/Yellowjacket in 2015’s “Ant-Man” will be the giant floating head we will see in the upcoming film. This would be a huge departure from the comic book source material as the comics version of MODOK, George Tarleton worked as a weapons technician for Advanced Idea Mechanics or A.I.M. a company founded by his father Alvin Tarleton. Darren Cross becoming MODOK would be one of the MCU’s biggest comic book deviations.

However, this is not out of the ordinary for Kevin Feige and the MCU. He Who Remains was introduced during the season one finale of “Loki” as a variant of Kang the Conqueror so Cross being MODOK would be in line with what the MCU has done before. Even characters like Sylvie whose essentially Lady Loki mostly in looks and gender rather than the actual name was introduced as a variant as well.

It is very possible that this version of Darren Cross is a multiversal variant. However, we never got full confirmation that Cross died during his battle with Scott Lang during the first Ant-Man film. Seeing how he was ultimately shrunk into oblivion, this oblivion being the Quantum Realm. It is very plausible that this intense shrinking and prolonged exposure to the Quantum Realm could have some physical and biological effects, mutations if you will.

Ant-Man and The Wasp: Quantumania Synopsis:

Super Hero partners Scott Lang (Paul Rudd) and Hope Van Dyne (Evangeline Lilly) return to continue their adventures as Ant-Man and The Wasp. Together, with Hope’s parents Hank Pym (Michael Douglas) and Janet Van Dyne (Michelle Pfeiffer), the family finds themselves exploring the Quantum Realm, interacting with strange new creatures and embarking on an adventure that will push them beyond the limits of what they thought was possible.

“Ant-Man and The Wasp: Quantumania” arrives in theaters on February 17, 2023.