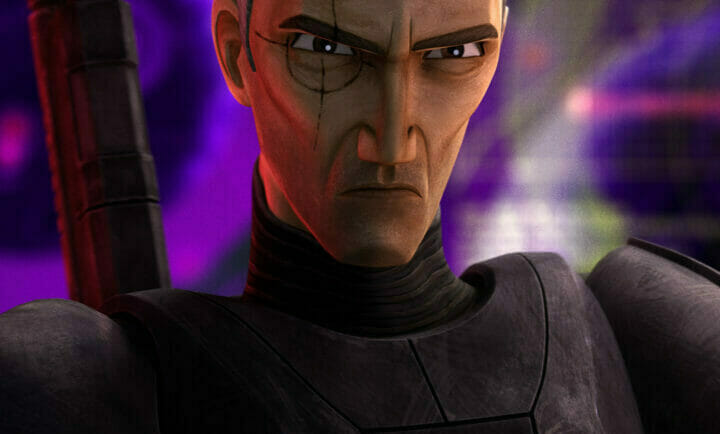 
Crosshair Returns in The Bad Batch episode 3 and he’s a lonely soldier.

Add another phenomenal episode to the list for the Bad Batch franchise! This episode focuses on one Bad Batch member in particular. And we get to see Crosshair going on his daily routine while being put on the injured reserve list. We see why the title is called the Solitary Clone; besides his Bad Batch brothers, other “Regs” Regular Clones seem to have some animosity toward him. While just sitting to eat his food at the mess hall they leave the table he chose to sit at (talk about high school flashbacks).

The theme around solidarity continues as the Admiral calls for Crosshair and gives him a mission after being cleared for active duty once more. But before he’s dismissed we learn that after the events of last season’s finale where Crosshair was left stranded on Kamino by the Bad Batch. He was there alone for over 32 rotations! And he chose to wait instead of what other soldiers would do and desert.

Just goes to show he is a clone that has his own set of morals. Moving on were given an awesome reunion with Commander Cody. If you don’t recall the name he was 2nd to Obi-Wan Kenobi’s squad throughout the entire Clone Wars. And I for one wanted to know what happened to the loyal Cody after Order 66. Unlike another fan favorite Commander Rex, it looks like the clone ended up participating in the ugly task of eliminating the Jedi. But I digress.

The heartfelt reunion is cut short by wavering ideals of just actions and continuing to be good soldiers. The newly formed squad must rescue the soon-to-be Governor of the planet Dexmis; currently a Separatist holdout. With a battalion of droids at their command, they are not taking to Empire control without a fight.

And to say that this episode doesn’t deliver action and story is an understatement. For the OG Star Wars fans, these are the type of episodes we live for. Star Wars literally was blasters, droids, and cool sci-fi war games; we only had a taste of what Jedi were with Luke and Vader. So to see this reminiscent scene where it’s just the clones doing what they do best against greater odds, and the cruel realization that the Empire is truly not looking for peace and order. This is what the Star Wars universe is built off of.

What this episode does incredibly well besides the awesome action sequences, the episode portrays what is at stake for the clones who have been through the entirety of the war learning from the Jedi and making their own decisions. Cody in particular mentions how many of the clones have questioned the actions the empire has taken thus far as well as noting that Crosshair was the only one from the Bad Batch to stay with the Empire.

In the climax scene after negotiating with the Governor of the planet, Cody hesitates on following a kill order from the Imperial officer that was just freed. Crosshair doesn’t hesitate of course but it gives Cody the clarity needed to know what to do next. His last words to Crosshair were so impactful, “Well, you know what makes us different from battle droids? We Make our own decisions. Our own choices. And we have to live with them too.”

Moments later Crosshair learns Cody has gone AWOL after returning. This is where I hope the turn in Crosshair cement, a great soldier like Cody felt what they were doing was wrong and left. It should only build on everything he’s learned and seen from his own brothers and hopefully bring him out from under the Empire’s cruel ways.

Everyone I will definitely plan to talk about this episode in more depth on a pod one day soon. Because I barely scratched the surface here. The episode hit all the right marks and I’m thrilled about the pacing this series is on, it can only get better from here!