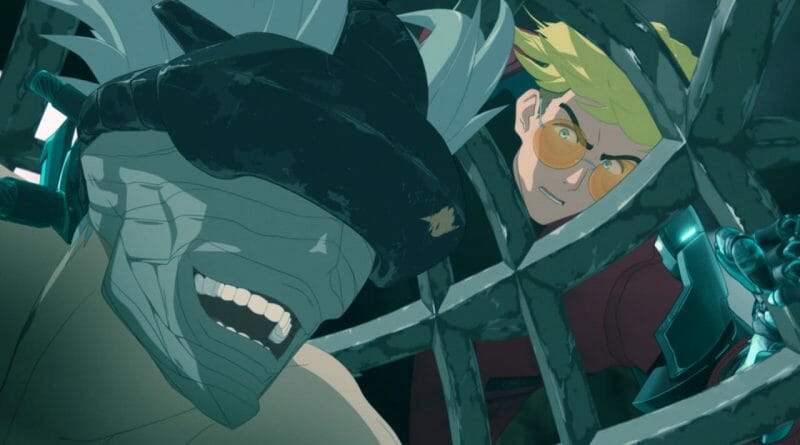 
Trigun Stampede returns this episode with a shockingly brutal display. The direction this episode took is certain to surprise anyone who’s been watching, I’d say. When Millions Knives and EG Mine make their appearance things get pretty bloody, and Vash appears to have met his match. All this just as Vash was about to leave town; one thing that hasn’t changed is his bad luck. It turns out the insect-like detonation device that killed Gofsef wasn’t alone, and the entire town is attacked by a swarm of them immediately following his demise.

As they begin to latch themselves onto the townspeople and detonate only Roberto seems to know it’s the work of “EG Bomber”. Roberto reveals his real name is apparently Ethan Gilbert Hamilton along with some other tidbits about his past; I guess we can leave it to the reporter to have some interesting info on the other characters. If EG Bomber doesn’t sound like a character you’re familiar with don’t worry because as soon as he appears he declares he has been reborn.

He now goes by the name EG Mine, but even with newly revamped gadgets it doesn’t do much to extend his lifespan in the anime. Stealing the town’s Plant also seems to be his reason for attacking, but from what he says to Vash while he’s grabbing it, there must be something more to the story.

Meryl and Roberto manage to pin him down despite not being combatants and demand that he disarms the explosives or die with them. In the end, he’s forced to give in or become a victim of his own weapons. Then while Vash attempts to talk Father Nebraska out of enacting revenge for his son he catches a glimpse of someone that clearly rattles him. Vash suddenly tells everyone to run away; a command that EG Mine must’ve taken as a suggestion himself except he runs directly to the person in question as if he knows exactly who it is.

As EG approaches the cloaked figure playing the piano all of our suspicions are confirmed after he’s ripped to pieces. The mysterious visitor is none other than Millions Knives. Knives appears to have some new abilities of his own, and the brilliant display of them with the CG in this episode makes me excited to see more. It wouldn’t be an exaggeration to say the events this time around were a slaughter. After killing his subordinate, Knives proceeds to finish taking the Plant from the town, leaving a bloody scene in his wake. Vash seemingly unable to stop him is essentially forced to watch him destroy the entire town.

Our reporters Meryl and Roberto managed to survive the carnage and destruction but many of the townsfolk weren’t so lucky. At the end of it, all Vash insists that he will get their Plant back to them, but he’s ultimately met with deaf ears. It’s unclear how the town will survive from here on out. His friend Rosa asks him to leave saying that none of this would have happened if he hadn’t been there.

Now that’s something that even Roberto was beginning to understand as well. It’s probably where he gets the nickname “Humanoid Typhoon”. From the way the town looks at the end of this episode, you could rightly believe some kind of storm went through it. For now, it looks like Vash is finally hitting the road this time, and he’s going after Knives. Let’s just hope for him that the next time he can make sure their encounter doesn’t end the same way.