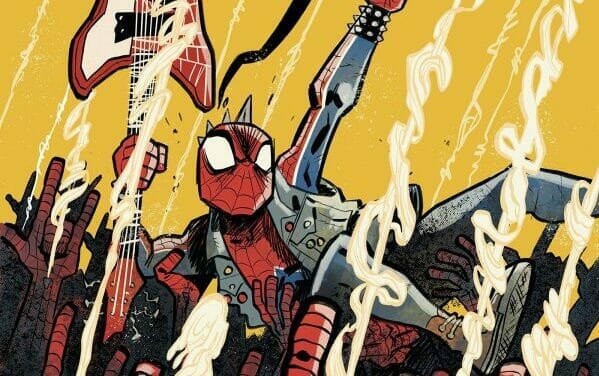 
Swinging in from Earth-138, a favorite from the Spider-verse, the Spider-Punk returns to debut his own mini-series. With his ax in hand and music on his mind, Hobie Brown brings the sound and fury as the arachnid hero of the revolution. Alongside his Spider-Band, containing Captain Anarchy and Iron Heart, Spider-Punk is searching for the mysterious benefactor who supplied Kraven and his band of hunters with high-tech weaponry.

It seems that these punk rock heroes are getting too close to the truth, the Taskmaster has arrived to take Spider-Punk and his friends off the board. What secrets lie ahead, and how does it all tie back to Norman Osborn. Writer Cody Ziglar, penciller Justin Mason, color artist Jim Charalampidis and letterer VC’s Travis Lanham explore this ever-expanding rock and roll world, sending our heroes into a widening conspiracy surrounding Neo-Nazis, laser cannons, and super-villainy.

Much like many other alternate universe stories, the creative team will take opportunities to re-introduce fans to major characters through the lens of this new universe. The Spider-Punk series is no exception. With fans being introduced to Earth-183’s counterparts to Iron Heart and Captain America in Spider-Punk #1, Spider-Punk #2 introduces the punk version of Ms. Marvel. Sporting a more casual look, with her iconic blue dress now being a blue t-shirt with her logo painted on, a pixie cut, knuckle dusters, and a guitar of her own, Earth-183’s Kamala Khan is introduced as a tomboy crime fighter.

This trend of introducing Earth-183’s interpretations of major Marvel characters will continue into the series’ next issue. The preview for issue three shows Spider-Punk meeting up with Daredevil, enticing fans to keep reading for the appearance of the Man, or Woman, Without Fear. An issue some fans may find with Ziglar’s writing is the use of modern slang. This book focuses on the punk movement and the themes of youth intrinsic to it. Characters are depicted as using modern-day slang, such as: ‘Built Different’ and ‘Bruh’.

Whilst making sense in-universe and perfectly harmless, fans may find it to be cringe or out of touch if slang is used consistently throughout the remaining issue or misused in the future. This would not harm the book’s reputation or take down the quality of its writing, it’s just some fans may find amusement in the series for unintended reasons. Within this issue, it is discovered that Norman Osborn had set up secret bases under urban community centers across the United States during his Presidency. With the Punk movement being organized to fight against the elite, it’s only natural that these bases were designed for everything totalitarian.

This reveal allows for Spider-Punk’s characterization to be furthered even more. With an entire network of underground bases, Hobie feels like his previous efforts against Norman Osborn and his reign. A moment of defeat allows Ziglar to make Hobie more sympathetic, as well as raise the stakes of his overall mission.

There isn’t much more to say for Mason’s illustrations. Much like in the premiere issue, the stylized characters and rough line work allow for the punk rock aesthetic to be at the core of the book’s visuals, whilst also ensuring there is an abundance of expression in characters’ movements. Similarly, there is nothing really more to say regarding the coloring. Charalampidis maintains the technique of using rough brush strokes to color the book, maintaining the punk.

It holds the same vibrancy that allows characters and environments to stand out, such as the framing of powerful strikes through the use of flat backgrounds. Spider-Punk issue number two offers a solid continuation of Hobie Brown’s very own mini-series. While not completely one-upping the ideas that were introduced in the first issue, readers are privy to the same high quality characters and visuals as they saw last month. Kamala Khan’s introduction in the issue is a welcome surprise and establishes a trend of introducing new punk-rock versions of famous Marvel characters, ensuring that there will always be something interesting and new for readers to experience each issue.

With the introduction of Osborn’s network of underground caches, the next issue in the Spider-Punk saga is set up as a road trip across this rocking and rolling version of the United States. With a road trip of epic proportions on the horizon, it’s sure to be a wild ride for the characters and the readers.