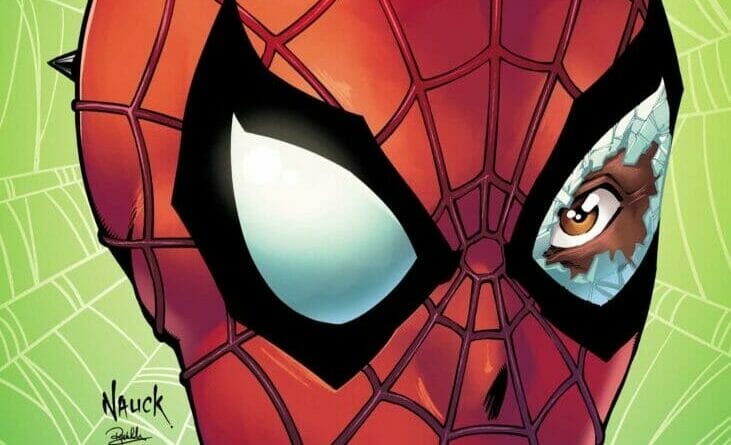 Swinging in from Earth-138, a fan favorite from the Spider-Verse, the Spider-Punk returns to debut his own mini-series. With his ax in hand and music on his mind, Hobie Brown brings the sound and fury as the arachnid hero of the revolution. Previously, readers saw Spider-Punk smash his guitar into the shell of the Venomized and villainous President Norman Osborn. With Osborn now dead, it’s time for the underground punks to take control.

Though the chaos that emerged in the wake of Osborn’s demise may put a spanner in the works, it looks like taking him down wasn’t enough to change the current state of affairs. Writer Cody Ziglar, artist Justin Mason, colorist Jim Charalampidis and letterer VC’s Travis Lanham, bring a rock and roll tale, unlike anything the Marvel Multiverse has ever seen. With Kraven the Hunter and his gang of laser cannon-wielding Nazis rioting in the streets and even more villains working the shadows, trouble always seems to follow the webhead.

This long-awaited mini-series finally allows fans a look into the Earth that the Spider-Punk inhabits. Aside from the fandom around Hobie Brown himself, readers can also check out how their other favorite Marvel characters will be portrayed through this punk rock lens. Captain America is not simply fighting for the independence of the United States anymore, he fights for the freedom of all peoples. No longer the star-spangled Steve Rogers, in this Universe Karl Morgenthau takes up the mantle as Captain Anarchy, with the iconic symbol of Anarchism adorning his shield.

Riri Williams’ Iron Heart is put through that same lens in this opening issue. No longer is her armor a sleek, spotless, and shiny technological marvel. In this universe, she rocks studded shoulder pads and knee-high boots and has used spray paint to cover her armor in little designs to accentuate her personality. At the center of this story is Hobie Brown’s desire to protect his community, which has only known the oppression of President Osborn until recently. This theme around the protection of the community extends beyond Hobie’s personal desire.

Kraven has been directly contracted to scare residents out of the local community in order for the area to be repurposed by his employer; gentrification. Ziglar’s crafting of the story to center the conflict around gentrification allows for Hobie’s moral mission to be recognized, while also highlighting the anti-capitalist themes at the core of the punk movement.

An issue some readers may come across is the appearance of this universe’s TaskMaster on the final page. Though he is a fan-favorite character in the comics, he is very prevalent across a majority of the books Marvel is publishing at the moment. Appearing in Devil’s Reign, The Amazing Spider-Man, and, likely, the upcoming Thunderbolts series. It would not be far-fetched to say some readers may be experiencing fatigue with his character.

The pencils by Mason are another strength of this book. Mason’s style leads more towards cartoon-like qualities rather than going for a sense of heightened realism. Characters are designed with simple silhouettes, allowing for action scenes to be easily telegraphed. Furthermore, a more cartoon-like art style allows for characters to be more expressive. Meaning there is sufficient movement throughout dialogue-heavy scenes to still be intriguing.

The coloring is what really empowers this book’s visuals. Changes in color and lighting are presented through rough brush strokes protruding out and curving around the environment. This method of coloring could be seen as a deviation from the norm, acting as a possible reflection of the themes of the punk scene. If that assertion is a little too artsy-fartsy, Charalampidis may have used this rougher technique to emulate the aesthetic of the punk scene, appearing more jagged and free-flowing rather than a calculated design.

Charalampidis only uses one or two colors to showcase environments. This allows each setting to hold a distinct visual flavor that audiences can recognize. Riri’s workshop is presented with a mix of purple and magenta, offering a futuristic, cyberpunk feel. The same can be said about times of day; the evening is showcased with a flat yellow sky and dusk is showcased with a flat navy sky. Environments remain unique without taking away from the characters’ page presence.

A visual technique is most popularly seen in the Spider-Man: Into The Spiderverse film is the erasure of the background to accentuate power strikes. When a character lands a powerful attack on their opponent, such as Spider-Punk kicking Kraven, Charalampidis will have the background as only one or two solid colors. Through this technique, the character’s actions are highlighted and the emphasis is placed on the attack. The audience will then recognize this attack as a finishing blow or the signal of a major turning point in the action set piece.

Fans of the web-head and his Spiderverse counterpart have long waited for the rock and roll hero Spider-Punk to get his time in the spotlight. It’s exciting to say that Spider-Punk issue one delivers one hell of an opening. Ziglar has created a story that highlights the ideas that are at the center of the punk rock scene. Having Spider-Punk and his allies fight against the mysterious capitalists that wish to erase impoverished neighborhoods both cements Hobie’s characterization and secures his spot as Marvel’s definitive punk rock hero.

Through Mason and Charalampidis’ collaboration offers readers a visual appearance that meshes perfectly with the jagged and vibrant punk rock aesthetic. This issue is a fantastic introduction to the turbulent Earth-138 and opens the doors for a Spider-man story that will soon be a stand-out amongst the tales throughout the Spiderverse.