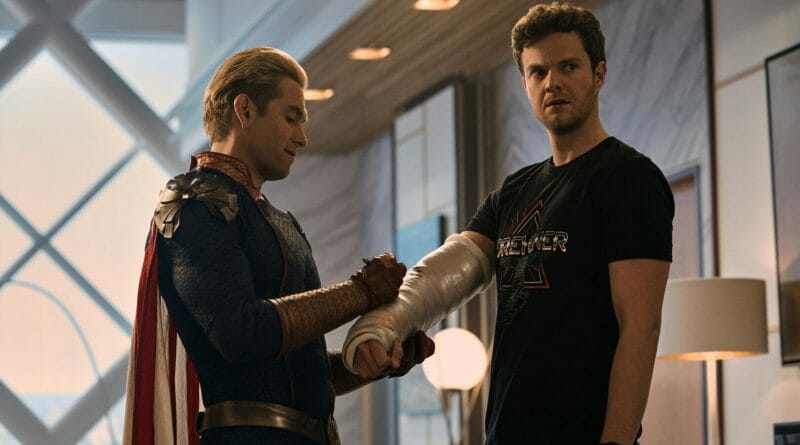 
Can The Boys find the weapon that killed Soldier Boy?

Last week’s episode of ‘The Boys’ left off with Homelander announcing his new relationship with Starlight on national television. Hughie also found out that Butcher has been using V24 (Temporary V). This episode opens with an honestly funny scene of a tone-deaf Soldier Boy having a musical performance. Hughie finds out that Starlight now has to play the girlfriend to Homelander, understandably worried for her. Homelander makes it worse by bullying Hughie when he arrives to pick up Starlight. This feeling of powerlessness is the motive for his actions later on in the episode.

I like how this season she’s struggling with her internal conflicts. She doesn’t want to be a part of The Boys anymore. Her whole life she has been treated as someone’s weapon and she is tired of it. She wants more than the violence she was created for. Meanwhile, tension is high in the Seven. The Deep and A-train are competing against each other for Homelander’s favor. Homelander likes the power he holds over The Deep. The Deep is getting manipulated by not only Homelander but his girlfriend as well.

A-Train, on the other hand, is trying to do the right thing for once but not-so-subtle hints of racism are preventing him from getting justice. Starlight and Supersonic try to make a plan to put more superheroes on their side for when the time comes to kill Homelander. Supersonic tries to use A-train’s discontentment with Homelanders’ treatment of him to try to have him join their team. Stan Edgar tries to get Victoria Neuman to hold a press conference as a way to leash Homelander. This does not end well for him because she reveals Homelander as Stan Edgar’s whistleblower at that conference. She tells the public that Homelander revealed evidence of Stan Edgar’s crimes causing him to step down as CEO.

Homelander is now in charge with no one to hold him back anymore. In return, she gets V24 from Homelander, which she gives to her daughter. With this, her daughter will be stronger than before. I’m curious to see what that will do to her. At the Russian base, The Boys find an experimental lab in the facility. They find a super-powered hamster that breaks the glass causing the alarm to sound off. Reinforcements come to apprehend them. Butcher reveals his powers to the group when he sees they are losing. Hughie sees a guard creep behind MM and uses his own new powers by teleporting to the threat, losing his clothes in the process.

He punches through the guard’s stomach. He stole the V24 from Butcher because during the beginning of the episode Butcher denies him the drug. He told Butcher was tired of always needing to be saved by others. How he is so angry all the time and for once he can finally stand up for himself. This is a great change for this character because he now has the ability to fight his own battles. The rest of The Boys are disappointed in him though. Especially MM who thinks it’s wrong to become what they have been spending their lives to stop. No person should have this power.

Once they abuse this power they will be no different than their enemies. Butcher opens a containment case that reveals that Soldier Boy was not killed. He was experimented on. He comes out hostile immediately targeting Frenchie. A blast comes out of his chest and Kimiko takes the blow. Frenchie is alarmed when he sees Kimiko not healing from her wounds. Soldier Boy has the power to take away super powers. Mother’s Milk sees Butcher’s complete disregard for Kimiko’s survival and quits the team.

At a red carpet event, Homelander tells Starlight he has something he wants to show her. He flies her to a rooftop where she is horrified to see her friend Supersonic dead. A-Train ratted out Homelander Starlights’ plan to form a team against him. This eliminates any chance of redemption for A-Train in my eyes. For a second I thought he would do the right thing. He ended up helping our protagonists last season and he is trying to do the right thing in this episode as well.

I thought that things would look up for him but him ratting on Supersonic to gain favor from Homelander just doesn’t sit right with me. He had a chance to do something good by joining Starlight and Supersonic. It’s sad to see his character take two steps forward and another step back. To keep Starlight in line, Homelander tells her the next time she steps out of line that will be Hughie. This was a very solid episode! I liked the cinematography, especially the scene with Butcher taking down the Russians.

The close-up of his facial expressions as he uses his laser eye’s to slice through his enemies was cool. The VFX was well done with the powers. There was one moment with a man’s head getting impaled with a dildo that looked a little off but besides that it was great. The dialogue between Stan Edgar and Homelander was great. Even though Stan was fired, he still keeps a condescending tone towards Homelander. Despite how powerful Homelander is, Stan still doesn’t see him as a threat, and despite his capabilities and what he was able to accomplish, when it comes to Stan, Homelander still plays it safe. He could kill Stan Edgar but doesn’t.

I think he wants to prove to him that he can succeed. Homelander himself made a lot of power moves in this episode. This is the most powerful he’s ever been. He now controls Vought and most of his team is under his thumb. I also like the direction they are taking with Kimiko. Karen Fukuhara gives a vulnerable performance with this character. The acting was amazing as always. I’m excited to see more of Jensen Ackles as Soldier Boy and for him to go up against Homelander.

His powers can definitely make the story interesting. I wonder how will Homelander react when there is a person that can take away the power Homelander loves to use against others so much? This is one of the biggest threats that Homelander has ever faced. Soldier Boy might be the weapon that can finally take him down for good. Really excited for the next episode!

‘The Boys’ Season 3 is streaming now on Prime Video.