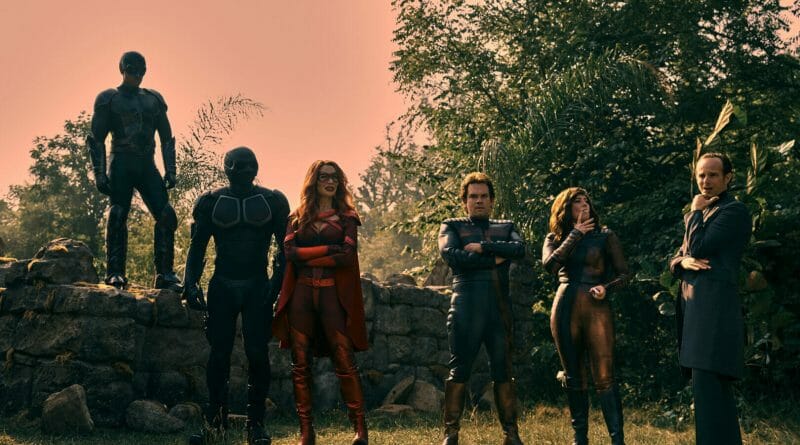 We see our favorite characters of The Boys living life after the events of season 2. Homelander (Antony Starr), is even more unhinged than ever. Vought made up a smart excuse of him being in love with the wrong woman and Queen Maeve’s (Dominique McElligott) blackmail hangs over his head to keep him in line. Hughie (Jack Quaid) is now working for the Federal Bureau of Superhero Affairs under Victoria Neuman, who we found out in the last episode that their power was to explode people’s heads. Her motive for the killing is still a mystery.

Butcher (Karl Urban) and his crew work for the government under Hughie to find Supes. Choosing to go by the book this time instead of being independent hitmen. The best thing about this show is the characters so it’s great to see them again after so long. Starlight (Erin Moriarty) and Hughie are now living together. Mother Milk, played by Laz Alonso, is reunited with his daughter. While he didn’t get back with his wife, he gave up his superhero hunting with The Boys to be there for his kid.

Vought Industries is making a new product they call V24 or Temporary V. This would give whoever takes it powers for 24 hours. This becomes very important later to the plot. Butcher is getting tired of doing things the right way. He thinks this way of doing things doesn’t stop the heroes as much as killing them does. Things are not going well for Homelander either. He gets asked to come in for a meeting with Stan Edgar, his boss. Starlight is also asked to attend. What follows is an uncomfortable scene with Homelander looking like he’s almost at his breaking point throughout. Mr. Edgar tells them that Starlight will now be co-captain of the Seven.

Meanwhile, Queen Maeve has brought Butcher Temporary V and information on a weapon that killed Soldier Boy that can be used on Homelander. Later, Homelander shows up at Butcher’s home for a talk. Homelander tells Butcher that he wants them both to destroy Vought. Once that is done they can finally have the fight they have been waiting for. One on One. Hughie on the other hand finds out that his boss is the head exploder that killed heroes in season two.

The Boys Season 3, Episode 2- The Only Man In The Sky

In the last episode, we left off with Hughie finding Victoria Neuman’s secret. He is understandably distraught to find out that everything he has been looking for feels like a lie and how dangerous his boss is. Butcher visits Mothers Milk to ask for his help to find out what happened to Soldier Boy. Mother’s Milk has a history with Soldier Boy that affected his life in a traumatic way. Mother’s Milk denies joining the group again but gives him a lead to follow.

Frenchie and Kimiko get assigned to get information out of an old flame of Soldier Boy, Crimson Countess (Laurie Holden). She gets away but not without casualties. Kimiko is left questioning herself if she’s ever meant to do good or if her only purpose is to destroy.

Homelander is having a televised birthday event and is making it his mission to belittle Starlight. He does this by making her do demeaning things like sing happy birthday to him or have sexy starlight dancers in her old costume behind her. He is just being very petty to her. This makes her upset so she uses her new leadership position to get out of doing it. Stan Edgar backs up her decision, irritating Homelander further.

Meanwhile, Hughie decides to investigate his boss at an old group home for kids with special gifts. He finds that her adopted father is Stan Edgar, CEO of Vought Industries. Butcher is on the hunt for information on Soldier Boy. He confronts Soldier Boy’s sidekick, Gunpowder (Sean Patrick Flannery).  Butcher has blackmail against Gunpowder but Gunpowder doesn’t fall for it. While saving a Suicidal Teen, Homelander becomes aware of the death of Stormfront. The only person he felt comfortable with. Angry, he makes the girl kill themselves.  It’s an intense scene that is chilling thanks to Antony Starr’s acting.

Hughie finally tells Butcher that Victoria Neuman is a super so Butcher sees this as a go-ahead to finally do things his way. He takes the temporary V, hunts Gunman down, and kills him. At Homelander’s birthday event, Homelander finally snaps in front of the public. He tells the audience he’s better than everyone. How he is done being controlled. How they need him and always will.

Now we get to see the result of Homelander showing his true colors. People like this new Homelander with his numbers going up by twenty-one points. Butcher is having a hard time dealing with the side effects of the temporary V once the serum wears off. Mother’s Milk and Hughie have now joined the team again and The Boys are back together. Starlight is busy picking the next two members of the Seven for her TV show, American Hero. While Frenchie’s ex Cherie is in trouble with a mob woman and is now being hunted. She has to run or she will be killed.

Butcher goes to Grace Mallory (Laila Robins) to find out information on Soldier Boy. They tell her about Victoria Neuman. Grace tells them about Soldier Boy’s disappearance after she worked alongside them. He just disappeared mid-battle and his disappearance is a mystery.  The Russians built a machine to kill Soldier Boy and took the body with them.

Butcher is angry because there was a weapon she knew about this whole time that could kill Homelander but she never said anything. Becca maybe could have lived if he knew about it. Angry, Butcher lashes out at Ryan. He tells him he blames him for killing Becca, his mother. I hate that every time it seems like Butcher is showing growth he deteriorates back into his old ways. This was a heartbreaking scene. Hughie finds out that Butcher is on V after he pukes on him.

Unsatisfied with Starlights’ picks for the team, Homelander invites The Deep (Chase Crawford) to come back to The Seven. In the first season, he was the one who sexually assaulted her. Homelander knows this but is doing this as a power play. She reminds him of the blackmail that they have of him leaving people to die on a plane. He isn’t intimidated though, stating if he loses everything that he will have nothing left to lose. He promises that he will kill everyone she loves first if that were to happen. He prefers to be loved but will settle on being feared if he has to.

The season finale of American Hero is now airing with Homelander and Starlight announcing the next members of the Seven. Supersonic (Miles Gaston Villanueva), Starlight’s childhood friend, is picked as the first member. The second is The Deep who wasn’t even a contestant. Homelander then announces that he is dating Starlight which is a really uncomfy scene.

This was a very good three episodes! It lets the viewers see what is happening with our characters a year later and gets us excited for what’s to come. A real stand-out is Antony Starr as Homelander. From his dilated pupils to his shaky-looking smile, you can tell that the man is on the verge of snapping. This leaves tension in the viewers watching each scene he is in. He is such a good villain that I don’t know how this show could go on without him as the antagonist.

Frenchie and Kimiko’s relationship is also heartwarming to see here. Timer Kapon and Karen Fukuhara have great chemistry together. The acting here is top-notch. Karl Urban does a great job showing rage and vulnerability in his role as Butcher. I just wish his character would stop taking one step forward and three steps back. It is frustrating to see him be a good leader and doing well for himself only to start doing the opposite of that later on.

Director Erik Kripke does a fantastic job with this first episode. The cinematography is also a standout, giving them a movie-like quality with the camera work.  Costume design is great as always, each hero looking unique. I like from a storyline standpoint that Butcher is now on a more even playing field than the last two seasons. It makes the story more interesting. The pacing is great because it hops from one character to the next.

Each person gets some character development. The VFX for these past episodes is pretty solid. I can’t find a flaw in any of the superpowers shown on screen. It is all very detailed. The gore is also more prevalent in these three episodes. It’s just what you are looking for in a rated R superhero show. These episodes get me excited to see what’s in store for our protagonists in the future. ‘The Boys’ continues to be a fun show with a lot of mysteries to unravel. I will check out the next episode!

The Boys Season 3 is streaming now on Prime Video.