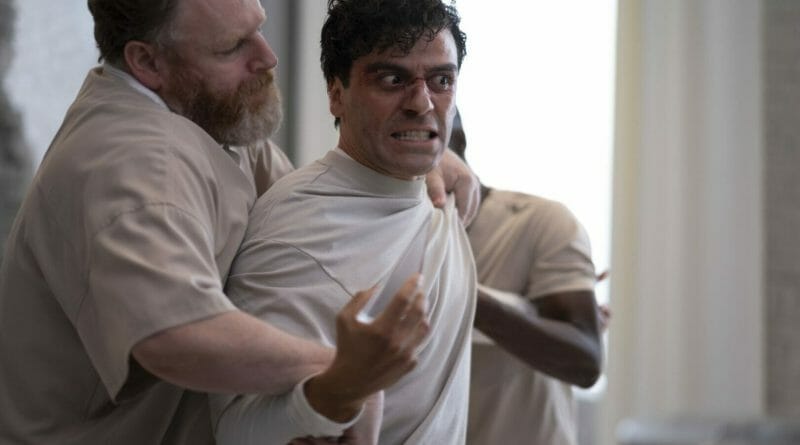 
Can Steven and Marc balance their scales in time? Or will they be dragged into the Duad for all eternity?

In last week’s episode of ‘Moon Knight,’ we left off with Steven and Marc running into the Egyptian deity Taweret, the goddess of women and children. Marc is back in the insane asylum talking to Arthur Harrow. Arthur is trying to tell him that everything is made up in Marc’s head. Marc gets understandably angry at this, lashing out at Arthur. He is then drugged to stop his violent antics. He is brought back to Steven and Taweret. The Egyptian goddess tells them that they are dead.

That they are in the realm of the Duad. She is there to guide them through their journey to the afterlife. This character is very endearing to look at. I like the attention to detail they put into her design. The way her ears flicker every so often when she speaks is very cute. Thinking this is all just in his head, Marc opens a door that leads them to find that they are on a boat.

The boat is taking them to A’aru, to the Field of Reeds. They are told if their hearts are balanced in their life then they will spend the rest of eternity in paradise. She takes their hearts out of their chests and places them on the scales of justice and feathers of truth.

If the scales are balanced by the end of the journey then the soul is permitted to pass into the Field of Reeds. If they do not balance they will be thrown overboard and the dead will drag them in the Duad for all eternity. I enjoyed all the Egyptian mythology in this episode. That was one of the highlights in episode two so I’m glad they brought more mythology for this episode. The scales are not settling so they have to face their memories if they want to balance them by the time the journey is over.

They find doors that lead to glimpses of Marc’s history which I have been waiting for a while now. We get to see Marc’s sad childhood as well as the guilt he feels over his little brother’s death. We see his origin in becoming the hero Moon Knight. How he met Khonshu as a mercenary and made a deal with him. It was a very powerful scene to see him turn into Moon Knight for the first time. They are interrupted by Taweret, who tells them unbalanced souls are being condemned to the sand before their time.

How this is the work of evil. She agrees to bring them back to their body to stop Arthur Harrow as well as help free Khonshu if they can get their scales balanced. This episode also shows the abuse a young Marc has to go through as a child at the hands of his own mother. Steven finds out how he became an alter, that he was never the host he thought he was. The distress and hurt Oscar Isaac portrays in this scene are heartbreaking.

Steven is upset that everything he thought he knew was a lie. He not only has to deal with the fact that he’s an altar but that his mother is dead. That those voice messages he’s been leaving for his mom were all lies he told himself. He sees how much pain Marc has been dealing with for so long as well. Steven tells him everything his mother said was never true. How his little brother’s death was never his fault. The scenery is then switched bringing them back to the boat.

They have run out of time, their scales not being balanced. The dead start climbing the boat to drag them off of it. They fight the dead together. While trying to save Marc, Steven is thrown off the boat to Marc’s horror. We have to sadly watch Steven get frozen in the sand and left behind. Marc scales are now balanced without Steven. He is now in the Field of Reeds. The stand out of this episode is definitely Oscar Isaac’s acting. He not only has to give an emotional performance but also plays two opposite characters that interact with each other. I hope he gets some recognition for his performance because he was fantastic.

The Egyptian mythology taught to the audience is also very fascinating to learn about. The transitions from scene to scene are creative from a visual standpoint. There were some very unique ways to jump from different settings that had me impressed. The VFX was also very well done in this episode. The Egyptian deity Taweret had a lot of detail in its design. The cinematography was impressive to watch. I especially liked the scene where Marc Spector becomes Moon Knight. His transition to the character after making a deal with Khonshu was beautiful.

I really liked this episode. I really wanted this type of character development for Marc Spector sooner. I wish the series was longer because I do feel like the momentum has slowed down to make room for this character development. This show would really benefit from more episodes. We only have one episode left and I don’t see how everything can be wrapped up in a satisfying conclusion. This has to be one of my favorite episodes of the series.

I really liked seeing the background of these characters and how they came to be. We got to see glimpses of Marc’s childhood and origin. How Steven was made by Marc to get through his childhood trauma. Steven represents the innocence Marc wishes he had. I really hope they can find a way to get Steven back. I was so sad when he tipped over that boat. He has been my favorite character throughout the series so if he is gone for good I will be disheartened.

Overall, this was a solid episode of Moon Knight. We haven’t seen him in costume for long, which I would normally complain about but this episode gave great character development for Marc that I really needed. I will definitely check out the next episode because I am curious to see how this show ends.

Moon Knight is streaming now exclusively on Disney Plus.