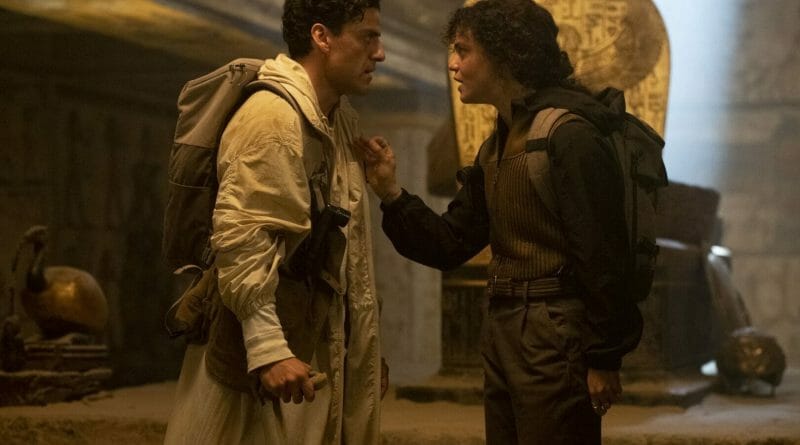 
What Truths Lie Behind Marc Spector and his connection to Layla’s Father? — Warning Spoilers For Moon Knight Ahead

In last week’s episode of ‘Moon Knight,’ we left off with Khonshu getting locked away and Steven passing out in the middle of the desert.  The episode opens up with Layla trying to wake Steven up. She is interrupted when a truck pulls up shooting at them. She cleverly defeats them with a flare stick by throwing it in the truck with explosives in the back. I like how she used her smarts to get herself out of a dangerous situation. I always like it when a love interest holds its own instead of just being a damsel in distress.

They get to their destination to find Harrow is already inside so they try to find another entrance that will help them get to the tomb faster. Steven and Layla are about to have a romantic moment but Steven blurts out that Marc is trying to protect her from Khonshu because Khonshu wants her as his next avatar. I thought he confessed this because he felt guilty for having feelings for Layla but he kisses her afterward so it’s a little contradictory. Marc gets mad at this, punching himself in the face in retaliation.

Using Steven’s knowledge to their advantage, they find a way to further explore the tomb and hey stop at what looks to be a sacrificial table with a trail of fresh blood and bones lying around it. Steven goes on a balcony above to see if he can find another path. Layla has to hide when she hears footsteps coming toward her. What appears is the Heka Priest carrying a body to put on this table. It honestly looked pretty creepy looking. The clicking sounds it makes followed by its walk were unsettling.

The Heka Priest kills the man taking out his organs to put away for later. Layla and Steven are forced to split once the creature discovers their presence. Layla ends up having to walk across a cliff edge to get to the other side in an attempt to escape it. There is a good jump scare with the same creature grabbing her from the darkness. She impressively fights him off, using her weight to push the thing off the cliff’s edge.

Arthur Harrow looks on from the other side and begins to tell Layla things that he shouldn’t know about her father. He tells her that Marc has not told her the truth about her father’s death. How Marc was part of the mercenary group that killed her father. He’s clearly trying to drive a rift between the two for his own benefit.

Meanwhile, Steven finds Alexander The Great’s tomb. He opens it to try to find the ushabti. He retrieves the item to his excitement until Layla reunites with him, demanding answers from Marc Spector. Marc takes over to explain to her that he never killed her father but was there when it happened. How his partner got greedy and executed everyone at the gravesite. Arthur shows up with his men, and when Marc refuses to give up the ushabti, Arthur shoots him.

We cut to a trippy scene of Marc in an Asylum, learning how he came up with his Steven Grant alter by continuously watching a film. Everyone he met including his wife is also present in the asylum. He is holding a Moon Knight action figure, calling out to Steven. He is then led to his psychiatrist, Arthur Harrow. He is making him doubt his sanity even more but feels like something is off. He escapes the orderlies trying to contain him.

He runs into a room with a sarcophagus that has Steven trapped inside. They embrace, happy to see the other. The episode ends with them running into the Egyptian deity Taweret. This was the best part of the episode for me. Marc waking up questioning his sanity on whether everything he knew about himself was something he made up in his head is an interesting concept.

I can’t lie, this episode was a little hard to get through. It’s no secret that I have complaints about the lack of Moon Knight in this show so when Khonshu got locked away in the last episode I was disheartened. The cinematography was still good, offering some interesting shots and scenes. The production design continues to be outstanding.

Set designs, creature designs, and even costume designs are great. The man-like creature looked creepy yet frightening at the same time. Everyone also did a great job acting-wise. The stand-out in this episode is May Calamawy as Layla. She had a real emotional moment that I think was portrayed beautifully.

Besides those things, there is not much that stands out in this episode. Steven is still endearing and we learn more about Marc’s history. I feel like it was a little glanced over. They talk about what he did in the past and failed to stop, which is the death of Layla’s father. It’s all explained to us though, never shown.

If this episode was going to have no Moon Knight then I wish it focused more on the characterization of Marc Spector. The last part of the episode was at least interesting. I’m just a little disappointed with what I’ve seen so far. Still interested in where this story goes though! Will definitely check out the next episode to see where it goes from here!