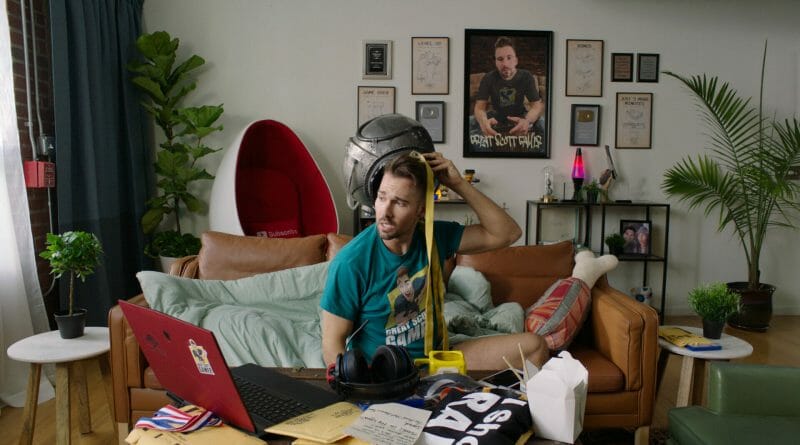 ‘We Need To Talk’ Review: A Contemporary Rom-com That Needs To Be Talked About


Scott is a narcissistic, popular gamer, who communicates with millions of his followers and online friends but not with many in real life. As his girlfriend exits the apartment one morning and leaves him with the ominous “we need to talk”, it sets off an agonizing yet funny chain of events that turn into self-discovery and where his relationship stands as he seeks answers from seemingly everyone but the woman who said it, his girlfriend Aly.

If I’m being 100% honest I had no idea what to expect. The last two reviews that I’ve done over the past week have been absolute duds. Self-inflicted duds because I picked him them but duds nonetheless. Rom-coms are generally very hard to pull off if you’re not supported by a big budget or a well-written script.

They really depend on very good acting and a screenwriter who is adept at good, meaty dialogue. These two factors, if done right, will often distract your average viewer from less than stellar production value or if they don’t have someone that they recognize attached to the film. WE NEED TO TALK has neither of these issues as it is easy, in my opinion, whether reviewed or just watched by myself, one of the better and more surprising rom-coms I’ve seen this year.

Todd Wolfe does a fantastic job of crafting a realistic, contemporary rom-com for today’s modern relationships which are often lived out almost entirely online via social media platforms for the world to see and comment on. James Maslow‘s character, gamer Great Scott, stands as a prime example of what many extra-introverted gamers go through on a regular basis.

Their family and advisers are people that they’ve probably never met but now, because of that they’ve become disconnected from the very things right in front of them, costing them many things in the real world. Maslow, though he started off a little slow, really delivered with his character, making me try to empathize with him before getting to the point of really wanting this guy to lose because he deserved what happened to him and the torture that came with it.

All of the torture was self-inflicted because of his obliviousness to the things around him that weren’t gaming or himself. He eventually comes to this realization giving me the ability to want him to win again even though he almost blew it a second time. I’ll give him a tremendous amount of credit as he had to really carry this very contained rom-com. He did this incredibly well.

The dialogue was written by a guy who definitely lived in a big city and understands, even if not a gamer, what a city relationship is like and the important things that come with that. I laughed very hard when Christel Khalil’s character, Aly, made the statement to the effect that square footage was more important than marriage. It was not the first time I’ve heard that and it made me 100% fall in love with the script.

While a script like this sounds awesome, it could easily float away if you don’t have a solid straight man or someone who brings a bit of seriousness to an otherwise funny or potentially goofy situation. Johnathan Fernandez as Joe did a remarkable job presenting a juxtaposition to James [Maslow] while keeping this film grounded in the reality it was tethered to.

It could’ve easily just turned into a goofy gamer mess with no real substance without him regardless of how good the script might’ve been. As good as James was I’m not sure he would be as good if not for him being the opposite of Fernandez. Realistically their scenes together were easily the most well-acted scenes of the entire film.

I know I was a little bit iffy on some of the production aspects, namely, I feel like the lenses were so inconsistently soft all the time and I wasn’t always OK with the editing here and there, however, for a film that is genuinely contained to two locations for the majority of the movie, you look past that and see an amazing cast that did a wonderful job in a rom-com heavy industry. This cast was punctuated by the presence of none other than Emily Bett Rickards as Amber. Emily might be the queen of doing a lot with a little as she really only has two scenes In the entire film but she steals them anyway.

Her frenetic mannerisms, cadence, and acting made for probably the two most fun scenes in the film leaving a lasting impact even when she wasn’t on screen. If you’ve watched her in any of her other projects this is not surprising but I definitely want to see more of her in films like these. I often wonder aloud “Is this who she is or is she acting ?” because either way, it’s phenomenal no matter where you drop her in a film or how long she’s there.

In my experience both as a filmmaker and a film critic, you often see a film that says “written and directed by “and there’s an immediate cringe as to how good or bad it could potentially be, with no middle. However, Todd Wolfe has shown with a well-written screenplay, good directing, a great cast, and a real understanding of your material, you could make a film that may not be appreciated now but somewhere down the line, will be somebody’s favorite rom-com they’ll force on their friends and those friends will be happy they watched.

“We Need To Talk” is available now on VOD.