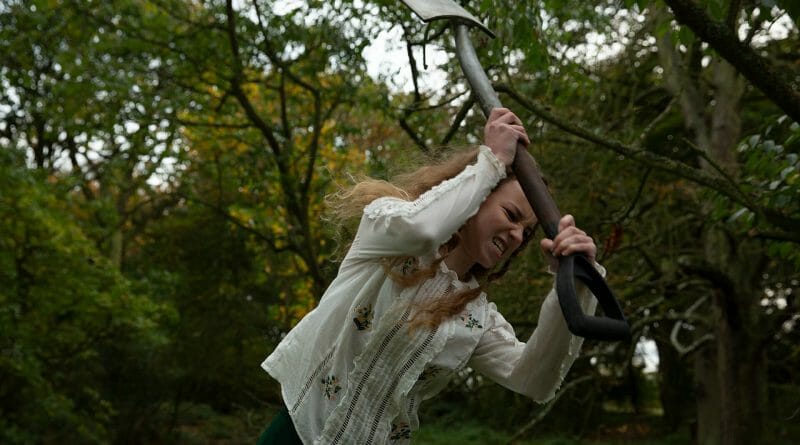 In ‘HOMEBOUND’ Holly (Aisling Loftus) and her new husband (Tom Goodwin-Hill) travel to the English countryside to meet his estranged family, only to find that his ex-wife missing and the children acting very strange. I often watch a movie 5 times, sometimes in a row, in order to grasp what the movie and its nuances are trying to say. I only watched this one-hour and 10-minute Sebastian Godwin effort twice.

Once was the initial viewing, the other to stare in disbelief at some of the issues that shouldn’t have made it into the final cut but did anyway. First and foremost, I would like to applaud the talent specifically, Aisling Loftus and Raffiela Chapman (Anna), Hattie Gotobed (Lucia), and Lukas Rolfe (Ralph) for their performances; holding together this cobbled mess of handheld and random push shots. They made an incredible, almost herculean effort in making this script passible. ‘HOMEBOUND’ felt like an underdeveloped short that was extended way too long, with zero notes taken into consideration

Godwin, who directed and wrote “HOMEBOUND’, clearly is a big fan of Ari Aster, M. Night Shyamalan perhaps Jordan Peele. They say imitation is the sincerest form of flattery then I guess it depends on how astute the imitator is to what they are imitating. In fact, the only thing that he seems to have gotten right while trying to imitate these directors is the music that was used to raise the tension level when need be. He should rewatch some of the movies that he definitely used as a basis for this underwhelming and shallow experience.

The editing was for, lack of a better term, atrocious making the passable parts of the script hard to ascertain. While the script has its faults, it probably could’ve been saved if they were better cuts and transitions. Instead, we got incomplete sections of the movie that would probably leave a normal audience bewildered and confused. The specific “Cherry on the Sundae” of the editing mess came at about 54 minutes in, when Holly picked up a pan, hitting her husband in the head to stop him from hurting one of the children. Randomly there was a cut of the stove burner turning back on right before (alluding to the earlier scene?) she did so which made absolutely no sense.

It felt like Godwin spent more time trying to be artistic and imitate his favorite directors and less time actually directing. It’s hard for me to imagine that he, being a professional filmmaker, looked at this in post more than once. HOMEBOUND has so much potential and I found myself waiting for the payoff as I am consistently eyeballing the run time.

I’m still trying to decide if I was looking at it in an effort to assume this is when the payoff would start or waiting for it to end. Overall, HOMEBOUND is an underwhelming, seemingly rushed, overextended short film, with grade A potential, got a grade D effort by both the director and the editor robbing pretty good performances by a fantastic cast. 2/10

‘HOMEBOUND’ is now playing in theaters and VOD.