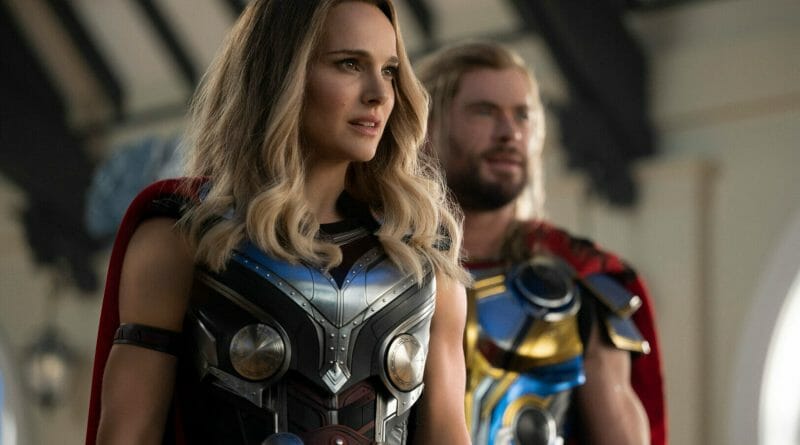 
“These hands were once used for battle. Now they’re but humble tools for peace. I need to figure out exactly who I am. I want to choose my own path, live in the moment.”

Taika Waititi’s follow-up to the massively successful 2017’s Thor: Ragnarok follows our titular hero Thor (Chris Hemsworth) as he battles against a new threat, Gorr The God Butcher (Christian Bale) with the help of his friends King Valkyrie (Tessa Thompson), Korg (Taika Waititi) and his ex-girlfriend Jane Foster (Natalie Portman) who has now become The Mighty Thor thanks to the restored Mjolnir.

In theory, this premise established in the teaser trailer for the newest entry into Thor’s adventure titled Thor: Love and Thunder sounded beautiful. The last time we saw Thor was in Avengers: Endgame where he felt a little aimless, he felt lost, he learned to accept the death of his mother and become the God of Thunder once more and save the universe from Thanos, but now he feels empty. He’s lost a lot throughout his journey, from his mother to his father, his brother, the love of his life, and even his home world was decimated. How do you come back from that? I assumed these questions and philosophies would be tackled in this new film, but alas, Taika seems to have had other plans.

The movie starts very strong, establishing the back story of Gorr, and how he comes to hate the gods and have a personal vendetta against them. For the most part the sequence works, it’s properly dramatic, emotional, and effective, but then we swiftly start to see the cracks in the script, because nothing is left to breathe at all, and then motivations shift too hastily. As a result, Gorr seems comically bad, almost to the point of being a cartoon villain, only the beginning and ending of Gorr’s journey have any weight to it and although it has a satisfying conclusion, the performance and even line deliveries are so far off that it’s baffling this was allowed to transpire.

And this was not Christian Bale’s fault, since we know he’s capable of delivering fantastic and nuanced performances, but in this instance, it veers into a parody of an over-the-top villain, with zero understanding of why he even is the supposed God Butcher. Even his villainous plan in the film itself is almost borderline ridiculous and just mimics another villainous plan from an older comic book film, I’ll let you guess which one when you see it.

At the very least the action sequences involving Gorr are enticing to watch. There’s a specific scene on a distant planet where it lacks any color, which makes for a very unique approach to a fight sequence I haven’t seen in any previous MCU movie, so there’s that at least.

This movie really needed to be longer in order to let emotional beats have weight to them. I’m not sure if there is a mandate over at Marvel Studios as of late where films can’t be longer than 2 hours anymore, but it’s becoming a detriment to the stories being told in this phase, particularly this one. There needed to be more moments with Gorr slowly developing into this man who lost faith in the Gods and decided to pursue and destroy them.

There needed to be more motivations for why the villain felt right in his path of destruction in order for us, the audience, to buy his cause. A longer running time would have also helped with the re-introduction of another character who was missing in the last Thor movie and makes a somewhat triumphant comeback in this one.

Jane Foster as The Mighty Thor is the other “new” character added to this film, and she brings some level of emotional connective tissue to the story and to Thor himself. I’ll give props to Waititi regarding how he retconned and recontextualized Jane and Thor’s decade-spanning relationship within the MCU. He makes you appreciate what they had and how it slowly deteriorated. All of this is needed to sell you one of the obvious main themes of the film, Love. And in that regard, it works pretty well. Taika does take some narrative shortcuts to get you to that emotional place, but overall it works.

Her character was given the bare minimum of her comic counterpart’s origin story to function within the tight story they told. I do wish they would have delved deeper into her narrative, and truly made this movie a dual protagonist story, telling both narrative arcs of Thor and Jane equally, but alas that wasn’t the case. Her fight sequences were fun to watch, but nothing excelled or seemed wholly unique, except with the use of the cracked Mjolnir.

The film also has the return of Valkyrie, who is now King Valkyrie and ruler of New Asgard. She has minimal screen time but she does seem to sporadically have a great friendship with The Mighty Thor, to the point where you wish you saw more of their friendship and perhaps even a Disney+ spin-off show. She has great banter with the rest of the gang, and her sequences were fun to watch, but nothing really excels here since most of the running time was spent elsewhere.

We get the introduction of Omnipotence City, a world filled with Gods, a nice treat for comic book fans who enjoy that sector of Marvel Comics. The primary focus, as it’s shown in the trailers, is Zeus (Russell Crowe). Zeus is absurd and ridiculous, and somehow the gonzo performance provided by Crowe works on me, only because of how insanely off-kilter it is. It’s not like Zack Snyder’s introduction to Zeus in his Justice League movie, this Zeus is very Waititi-esque, for better or worse. The whole sequence seemed just set up for something else, and honestly would have been the primary scene I would have cut from the movie in order to add more development to the main characters we already had.

I understand these decisions come from above, and they all serve the grand story being untold in this Phase of the MCU, but it gets to a point where it just feels distracting. Everything just seems like set up for something else and you’re not allowing the said audience to just enjoy what’s in front of them. Marvel Studios seems more concerned with endlessly teasing their moviegoers with what’s going to come next instead, which is tragic at this point.

The visuals are pretty phenomenal, the CGI for the most part looks great. They clearly took better care of the visuals than in other flicks. There are some weird attempts to try to replicate James Gunn’s needle drops, but they just don’t land as efficiently as when Gunn does them. It has to do with the fact that the scenes don’t seem to be choreographed and constructed around the needle drop, hence they feel like they added the songs after the fact.

Finally, there’s such tonal whiplash constantly happening in the film that it’s hard to understand what Taika is going for and what I’m supposed to feel. It starts out dramatic, almost like a Shakespearian tragedy, and in the same sequence, it turns borderline parodical. And it’s something that consistently happens in the film. Taika Waititi’s conceptual idea of a man who’s lost, who needs to find himself, find his own way, and find love again sounds fascinating on paper, and while the elements are here, they aren’t given the care and attention to stick the landing and make a compelling character arc within the MCU.

It’s uneven, some elements truly work, but others don’t. That being said, I absolutely loved the ending of this film, since all the conceptual ideas and themes shown in the film are merged into one and it definitely works, even if the director didn’t connect all the emotional dots to earn said finale. The movie garnered laughs from the audience so I’m sure the film will be a hit, but there was a better story here than the one that was presented.

‘Thor: Love and Thunder’ is now playing in theaters.