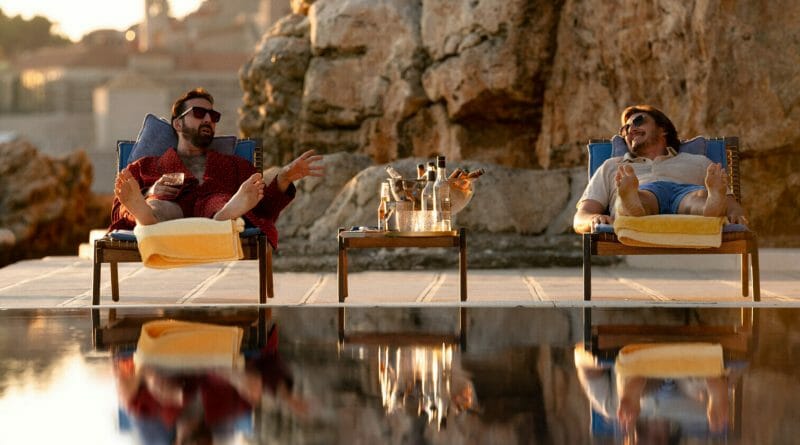 ‘The Unbearable Weight of Massive Talent’ Review: The Ultimate Nick-Cagiest Film To Rule Them All


The Unbearable Weight of Massive Talent is a fantastic meta love letter to a beloved American actor.

Nicolas Cage stars as Nick Cage, in a heightened interpretation of himself, in the newest action-comedy film directed by Tom Gormican titled ‘The Unbearable Weight of Massive Talent’. The titular character is struggling with financial woes, family drama, and creative bankruptcy. Luckily he gets a $1 million dollar gig to assist a giant birthday party of a seemingly mild-mannered super fan named Javi Gutierrez (Pedro Pascal). Everything goes down the shitter when Nick Cage is employed by a CIA operative (Tiffany Haddish) to take down Gutierrez’s empire. He must hone his very peculiar skill set in order to survive and complete the mission, all while discovering who he really is… Nick FUCKINNNNNNNNNNNNNNN’ Cage.

Where to begin with this one? It’s truly phenomenal watching Nicolas Cage’s career throughout the years. He’s done amazing pieces of cinema such as Raising Arizona, Adaptation, Leaving Las Vegas, Face/Off, and even most recently with Pig. Cage has always been able to portray a huge array of characters, with tonally different interpretations, going from very subdued to ridiculously over the top and everywhere in-between. The man truly has a very fascinating range. With The Unbearable Weight, however, it truly acts as an ode to what he has accomplished throughout his career, acting as a type of greatest hits if you will.

The fact that Nick Cage is in on the joke and plays with this self-deprecating humor makes the experience even more fulfilling as you watch the film unfold. The film starts with Nick Cage at seemingly his lowest point. He can’t get an acting gig and has found a hard time landing them due to his own insecurities. He can’t connect with his daughter on any foreseeable level. He’s not with his wife anymore and he’s on the verge of going bankrupt. Thankfully his agent (Neil Patrick Harris) finds him a seemingly easy gig, just go attend a billionaire super fan’s birthday party for $1 million dollars. He begrudgingly accepts of course, and off he goes to meet with him.

The story goes off the rails, somewhat metaphorically and literally, when Javi proposes to Nick that he be the star of a screenplay he wrote. The film becomes a self-aware narrative of two men who forge this unlikely budding friendship in the midst of chaos and violence. All the while Nick Cage is secretly hired by the CIA to uncover a dark mystery Javi is harboring. Cue the self-referential comedy, the nods to Nicolas Cage’s filmography, and even reverence to the classic German expressionist film The Cabinet of Dr. Caligari. These elements converge to create magnificent chemistry between Cage and Pascal.

The Unbearable Weight of Massive Talent truly gives Nicolas Cage a role to sink his teeth into. He gives you the traditional Cagesims while also giving some levity and gravitas to his character journey. It’s not the most complex or deepest performance he’s given, but It’s an interesting amalgamation and creation of what a heightened Nick Cage would be, and he captures that essence pretty phenomenally. Pedro Pascal is no slouch either, creating a pretty hilarious performance as Nick’s superfan.

His giddiness and star-struck wonder he has over Nick Cage is adorable. The other supporting cast does an acceptable job in the roles given, even if some elements feel a tad underbaked. Tiffany Haddish and Ike Barinholtz don’t really do much in the story and sadly don’t shine at all except for a few comedic lines. The whole b-plot of the film dealing with the CIA, while I understand from a narrative perspective why it was constructed for this film, in the end just takes away from what is otherwise a very enjoyable ‘bromance’ type of movie.

I’d argue if there was a very weak element in the film it was the third act action sequence, it felt undercooked and pretty straightforward. I was expecting some type of extravagant shot-out ala John Woo to accentuate the whole Nick Cage of it all, but it never gets to that point. Nevertheless, fans of Nicolas Cage’s repertoire and consumers of auteurist cinema will enjoy a lot of what this experience will offer. It was definitely made with those two audience groups in mind.

If this whole ordeal seems like too much, too self-aware, too meme-able, fret not, because there are moments that pull it back to some semblance of reality and grounded emotional weight. It never goes truly gonzo or truly so bad it’s good, but instead, it threads the line and plays this more as an introspection of an actor who seems to be at the end of their career and feels they have nothing to show for it.

It delves into the psyche of pure narcissism itself, and how that can cloud the artiste who wishes to excel. I sadly wouldn’t say it goes as profound as say Alejandro González Iñárritu’s Birdman or (The Unexpected Virtue of Ignorance) but it doesn’t need to go in that direction. It decidedly plays it a bit more comedic and more as a celebration of the man it’s choosing as its subject matter as opposed to this broader concept of what a washed-up blockbuster actor can provide to the arts late in their career. It’s a very fun and memorable experience if you decide to check it out at the cinema. And frankly, we all need something memorable nowadays.

The Unbearable Weight of Massive Talent will be playing in theaters on April 22.