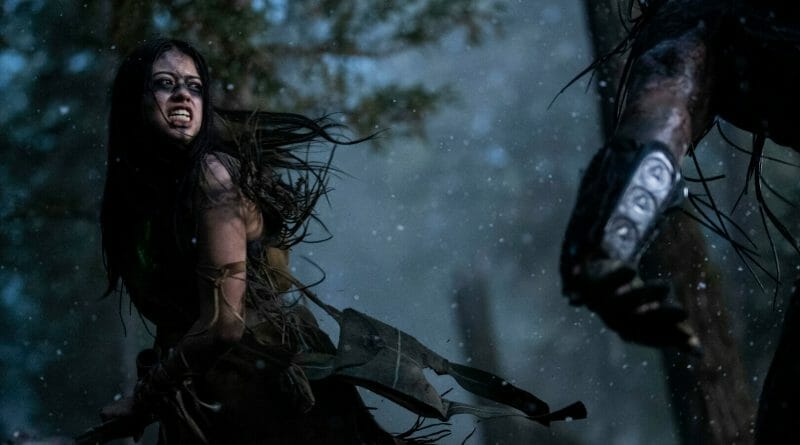 ‘Prey’ Review: A Back-To-Basics Approach to a Well-Worn Franchise

The Predator franchise has been a very prominent one in pop culture since the first film released back in 1987 with Arnold Schwarzenegger to the point where even if you haven’t seen any of the films you have a basic understanding of who the character is, what it’s purpose is and the general plot thread of most movies. That’s what powerful iconography and simplicity can get you, where a very unique creature design mixed with basic character motivation, in this case, a Predator who wants to hunt its prey, and you have a recipe for success.

Then the question must be posed, why can’t Hollywood get that simple formula right most of the time? Why complicate something so simple and easy to construct? Thankfully the newest 20th Century Studios movie ‘Prey’ directed by Dan Trachtenberg decides to go back to its original’s roots and tell the simple story of man vs. beast.

The movie cleverly focuses on a distant past, with the Comanche Nation in 1719 to be exact. It follows the story of Naru (Amber Midthunder) and her quest to prove herself as a capable warrior for the tribe. This idea of essentially making a prequel was a smart move, it strips down the overcomplicated lore the franchise has built over the decades and makes everything more streamlined and easy to follow. A huge mistake from other entries of the franchise was the need to expand the lore into absurdist territory. Trachtenberg cleverly avoids these trappings and just gives you a character study of a woman who yearns to be seen as a fighter and a protector of her people.

Amber Midthunder does a great job in her lead role as a warrior who uses her wit and cunningness to overcome any obstacle that approaches her, as opposed to her other brethren who use brute force to solve their problems. She has a great relationship with her co-star Dakota Beavers who plays Taabe, her brother and mentor. Taabe sees the potential in her and is willing to give her a chance to prove herself.

He teaches her and defends her against the other warriors who don’t see her as a fighter in any capacity. It’s a solid character dynamic that works expertly well for an action-centric film. The action sequences are visceral and effective. They’re also cleverly constructed since they have to rely on the technology from the 1700s. So a lot of nature, flora, and fauna are utilized to great effect. It makes for unique scenarios where our heroes have to survive against the main antagonist, The Predator.

The Predator has a great design this time around and it was used effectively throughout the whole film. He shows up scarcely early on in the movie, being presented mostly with his camouflage look, so you see the villain as our heroes see him, as an invisible force of nature. Plopping the Predator in the wilderness made it refreshing as we saw him battle against the elements, fighting bears, wolves, and so on.

It showed the slow progression of the villain fending off the earthly threats, starting from something small and going up the evolutionary ladder to humans themselves. When we finally see The Predator in all his glory he has a great aesthetic and design. Even having moments where it’s a practical costume, which is always refreshing and welcomed in these types of big Hollywood movies.

Another great aspect of the film is that our heroes and our antagonists never felt infallible. They all suffered, got hurt, and had to lick their wounds when they lost a battle. The Predator never won any fight with ease, which made the fight sequences all the more compelling. The same goes for our human heroes, every fight with the forces of nature or the villain itself felt horrifying, knowing that at any moment they could instantly be killed. This all adds to the tension of the movie and adds a level of excitement and dread as the story reaches its ultimate conclusion.

I won’t deny the VFX at the beginning felt a bit off, a weird-looking spaceship here, a wonky camouflaged Predator there. Even some of the animals looked a bit off at times. But as the film progressed the visual effects got better, or at least the imperfections didn’t seem as noticeable. And a lot of the important fight sequences looked pretty great, whether they relied on computer effects or opted for a more practical route.

The other sort of big nitpick I have is the fact that the movie has Native Americans speaking almost perfect English. This really felt off, especially in a 2022 lens. I truly believe general audiences have grown accustomed to consuming content in various different languages, look no further than recent examples such as Squid Games on Netflix. I think audiences are more friendly towards subtitles than before, so I feel it was a huge mistake to not have the film be shot with the actor speaking in Comanche.

And weirdly enough the higher-ups thought the same since the film will be dubbed in Comanche as well. But I think it’s not enough, they should have done this from the get-go. And you might say, well there is a possibility, given the time period, that the tribe could have learned the English language by the early 1700s but I’d argue that given the context of the story itself, it seems a bit far-fetched.

Another point in my favor to have done the movie completely in Comanche is the fact that when we are introduced to people who speak a different language, history buffs would know who they encountered, they speak their actual language, and they just have an interpreter to translate in English what the others are saying.

‘PREY’ is streaming now on Hulu.