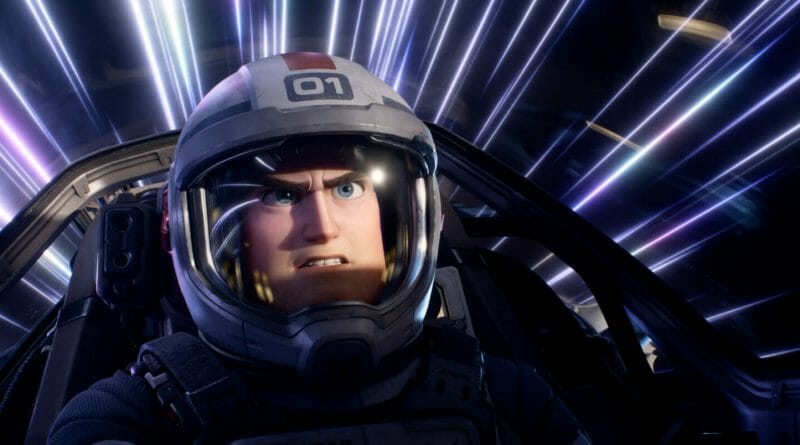 
First introduced to the world in 1995’s Toy Story, Lightyear tackles the narrative behind the famous Buzz Lightyear action figure Andy used to play with all those years ago.

Living with guilt and regret is something truly horrific. If it’s not channeled, it can consume every fiber of your being. A mistake, a single solitary mistake, can cost you your sanity and your mental stability. Obsession is also a feeling that can bring positive outcomes, but this film tackles the notion of what can happen when you go too far when obsessing over a particular thing. Pixar has consistently brought wholly unique stories and fascinating explorations of themes, characters, and metaphors for children and adults alike to enjoy.

They might not all be sure-fire hits, but at the very least, they all leave room to create dialogue, craft thought-provoking questions, and elicit heavy emotions. And I’m happy to say that their newest entry, Lightyear, is no different, despite a few minor issues. If you haven’t seen the various trailers as I did, you will be amazed by what the actual story is about. The reasoning is because I feel that the first act is the most emotionally driven, tied with the climax of the third act. I won’t spoil the fundamental premise if you don’t know what it is.

Suffice to say, it deals with the origins of Space Ranger extraordinaire Buzz Lightyear and how he’s trying to escape the planet they are on since they have been marooned there for a while. The first act is exceedingly strong. The way it slowly dawns on you that the repercussions of Buzz’s action will factor into the rest of the story is brutal on an emotional level. You will be internally screaming as you see how obsession can destroy someone to their very core. Buzz Lightyear (Chris Evans) is a very driven, and focused character, making it all the more interesting when the movie showcases these traits as deep flaws.

The animation is fantastical and beautiful. The use of light, color, and contrast are effective in setting mood and tone throughout. It deserves to be seen on the biggest screen you can find. I saw it in IMAX and the visuals absolutely blew me away. The second act seems to be the weakest aspect of the film, since it focuses mostly on establishing the supporting cast and dealing with the mission at hand, leaving little room for emotional catharsis. Nevertheless, the supporting cast is wonderful and fun all around. Through these misfits, Lightyear will learn important lessons along the way. It’s not terrible but it falters when compared to the premise the film lays out.

Speaking of supporting characters I have to make a special mention of his robot cat companion Sox (Peter Sohn). Sox is by far the funniest and most adorable new toy introduced in a Pixar film, every kid will want to buy it after the credits start rolling, myself included. This oddball cat has the majority of the best lines and comical situations out of all the characters. Sox also contributes a lot to the emotional journey Buzz Lightyear endures as the story moves forward. Lightyear is an ode to Star Trek, Star Wars, Interstellar, Starship Troopers, and even Alien. It’s a phenomenal exploration of genre and it plays with it incredibly well.

It’s a nice hodge-podge of elements that seem familiar but are restructured for this story instead. And it all gels together pretty nicely. The third act gets its groove back in terms of character arcs and fulfilling some promises set up at the beginning regarding themes. The audience will understand why everything plays out in this manner, although I’d argue it turns a little cliche towards the end. All the character motivations are sound and reasonable and dare I say, you can empathize with many of the characters’ plights.

But I cannot deny that there’s a little bit of a contrivance to try to justify certain elements flowing the way that they flow in the climax of the story. Another final nitpick would be that the ending, particularly the epilogue, seems a tad rushed. I feel the film could have used a small character or story beat, to kind of ease you into the aforementioned epilogue of the story. It’s not vital, but it could have accentuated all the themes and left the audience with a little breathing room after the big climactic sequence.

All in all, Lightyear truly shines in the first act and third act, and it stumbles a bit in the second one. It isn’t on the top shelf of Pixar’s filmography, but it’s not terrible at all. There are very strong sequences and emotional gravitas that will leave you thinking after the film concludes, and not only to go to Amazon to buy those wonderful toys.