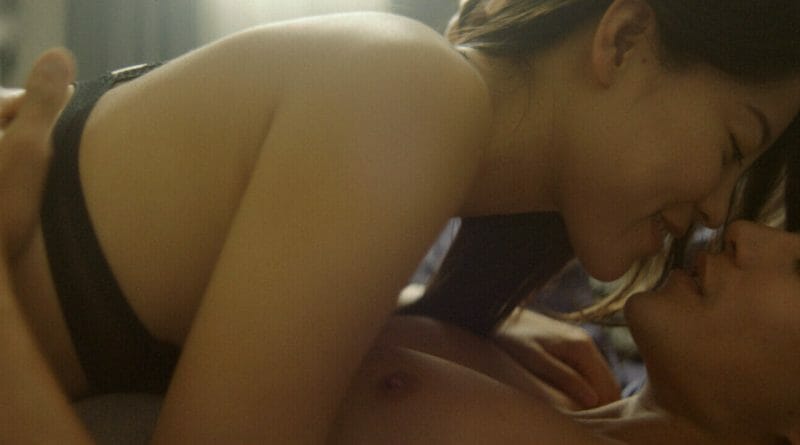 ‘In A New York Minute’ Review: A Compelling Yet Slightly Melodramatic Journey Of Three Chinese-American Women in NYC


In A New York Minute observes the odyssey of three Chinese-American women as they navigate the complexities of love and their own self-worth.

Ximan Li’s directorial debut, In A New York Minute, chronicles the story of three Chinese-American women in New York, a food critic (Amy Chang), an aspiring actress (Yi Liu), and an escort (Celia Au), as they struggle to overcome their fears, pains and aspirations to achieve their dreams and ambitions. The three narratives interconnect ever so slightly with the usage of specific events or objects, but the bond that ties them the furthest is their respective pain and suffering.

What will you do if you can’t exercise at all? This is the conflict being explored during the film’s first act, where we navigate the troubling dilemma Amy Chen (Amy Chang) has. She’s a food critic who can’t eat food because of a past trauma she’s trying to suppress or overcome, with troubling results. The thesis and concept alone sell me on the journey Amy will endure, but it’s the execution that falters for me.

This section of the story is decidedly insistent in exploring her weird budding relationship with her friend Peter Chow (Jae Shin), where he recognizes very early on that she has an issue with eating food. Hence, he decidedly helps her by providing home-cooked meals every day until she can grow accustomed to eating again. Unfortunately, it all feels too simple, derivative, and overtly expositional through this first chunk of the movie. All these emotions and feelings are far too explicitly told and rarely ever shown – a trend seemingly permeates in this triad narrative.

Amy Chang’s performance is acceptable but a little telegraphed, and Jae Shin does his best acting as the bumbling best friend with unrequited love. However, the resolution of the first act feels a tad empty, a bit too simple, and too surface level for the initial premise proposed here.

Do you choose love or freedom? Do you prefer to engage in a hapless marriage or a loveless affair? These are the questions cemented during the second act. Here, we follow the story of Angel Li (Yi Liu) as she tries to navigate her job as a struggling Chinese-American actress in NY, a husband who is never there, and a lover (Ludi Lin) who can’t emotionally connect to her.

The story suffers from some of the same aforementioned issues from the first act – the overtly expositional dialogue and the simplicity in its approach. Albeit, in this instance, it has far better performances from Yi and Ludi, who sell their intimate bond magnificently; you believe they truly have a strong bond. Yi Liu constructs a nuanced look at a woman who deals with many inner conflicts. Her quiet scenes say a lot, and her mannerisms add more layers to her character. Her struggle to find roles in NYC as a Chinese-American actress echoes the endeavor other minority actors and actresses endure while finding movie roles.

She almost acts as an avatar for the plight of the up-and-coming actors in the big city, how difficult it is to get into the industry, and the willingness to accept nearly anything in hopes that it will be a jumping-off point to something better. Her love life is more defined, and the thematical problem is more explicit in the film, even to a fault, but at least it naturally traverses to its ultimate tragic conclusion.

The third and final vignette revolves around the question, “Can you ever truly and entirely escape your dire life situation?”. We follow Nina Wong (Celia Au) as she tries to earn enough money as an escort to escape the shackles of her family life. A food truck owner, Ian Tam (Roger Yeh),  starts building an intimate relationship with Nina as they work for a future to be together potentially. This section suffers from melodrama that is ever-present in all three stories. Still, it also contains solid performances from its cast, particularly from Celia Au herself, as a depressed yet hopeful woman who can express a beautiful array of emotions with just her facial expressions.

The film ends in an epilogue, loosely weaving all these chapters together into a holistic conclusion that ties to some degree the film’s central thesis, which is explicitly said by one of our main leads, ‘Will you choose love or freedom?’. It works to some degree since it wraps everything into an uneven bow.

Arguably my most significant concern lies in the script. It’s a little too explicit when it comes to conveying how the actors are feeling, what the film’s themes are supposed to be, and the issues these Chinese-American women are dealing with in the US diaspora on a daily basis.

A few more passes on the script could have fine-tuned these ideas into something more cohesive and nuanced and could have given way to a more introspective and character-driven look into the lives of women who are just trying to get by in their daily lives. If you are interested in seeing narratives such as these, give it a watch and pass the word around because we still need to see more narratives dealing with the subject matters showcased here.

In a New York Minute is now available on digital.