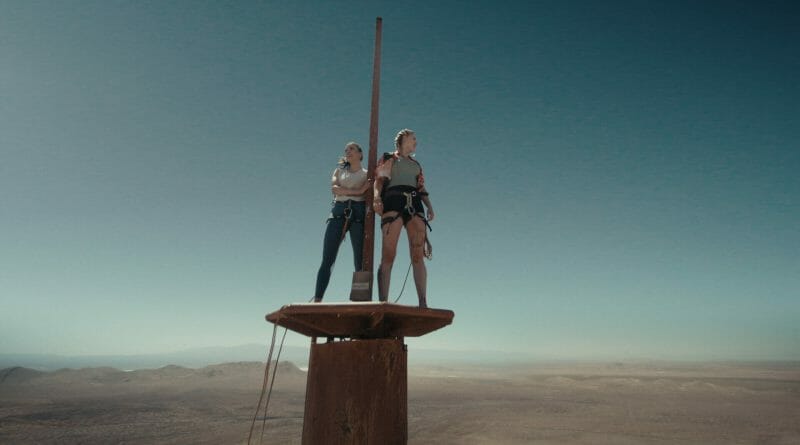 
In the same vein as movies about women with a specific set of skills surviving obscene circumstances in the past decade, such as The Shallows with Blake Lively, ‘Crawl’ with Kaya Scodelario, and ‘Infinite Storm’ with Naomi Watts, “FALL” directed by Scott Mann and starring Grace Caroline Currey doesn’t add anything new to this specific genre but it’s still a fun vertigo filled thrill ride that’s even more impressive considering the small budget the film had.

‘FALL’ follows Becky (Grace Caroline Currey), coping with the loss of her husband (Mason Gooding) after a disastrous free solo rock face climb with their best friend, Hunter (Virginia Gardner). After a year of this tragedy, Hunter tries to pull Becky away from her depressed state and convinces her to climb a 2,000-foot communication tower that’s up in the middle of the California desert TV Pole. She accepts and what follows is 70 minutes of adrenaline-rushing, vertigo-inducing nightmare fuel, especially if you can’t stand tall heights.

‘FALL’ expertly builds the tension throughout the first act, slowly showing you a cable tensing up, the rust crackling beneath their feet as they climb up the ladder, and small screws falling off as they reach the top. As an audience, you almost feel this should be a cakewalk for these export mountain climbers. As a result, it all feels low stakes, at first. The story structure and the sequence of events are borderline predictable, especially if you’ve seen those types of films before.

You can almost feel the story cue of when the next hurdle will come for our two heroines, but it’s still impressive how it was achieved on a technical level. Everything in the film feels tangible and tactile, you do feel they are climbing up a giant 2,000-foot tower. The mostly seamless CGI blended with practical sets and great illumination sells you on the effect completely and as a result, it immerses you in the electrifying ride.

The narrative touches on all the familiar beats to the point where you can almost perceive where the next rock on the road is going to come. The theme is laid out very explicitly early on in the film in a not-so-subtle visual and verbal expository shot. Even with these elements, the film shines in the way it crafts its tension and adrenaline rush.

The story just serves as a simple tool to drive you to the next sequence and the next hurdle they have to overcome. A simple example is during the middle of the film they fly a drone to send a message to a nearby diner, as they fly it they realize it has no batteries so they have to recover it.

When they recover it, they realize they don’t have the means to actually charge the battery. So on and so forth. It almost feels like the movie equivalent to trying to reach the word count on an essay In which case it’s fine because it just sets the audience up for another chain of events for the general viewer to gawk at and admire.

Even with these elements, I do wish however they pushed harder on the visual elements of the film. The landscape and drone shots are very impressive, and really situate you very well in the scenario our leads are in, but there’s no flair to it, it never truly tries crazy cinematography to sell you on what’s happening.

There are a few shots, one, in particular, involving a Converse sneaker, that truly impressed me and I was praying for more shots in this manner, but they never came to be. That being said, even if we never see the classical ‘vertigo shot’ crafted by Hitchcock back in the day, the film does play with the angles and the editing well enough to give you a constant panic attack throughout the flick.

Grace Caroline Currey does a great job of selling the slow decline of someone who is trying their best not to give up into despair. She shows the range and excels in a film that never needed to delve deep into the emotional territory but it’s very welcomed and adds some level of humanity and empathy for what’s happening to her character. As a fan of the National Geographic documentary Free Solo, I enjoyed these sequences, and they were shot realistically enough to buy into the premise the film sells you.

Given FALL’s $3 million dollar budget, it’s truly awe-inspiring how clever and efficient they were with their budget and tools at their disposal. I rarely questioned if it was a green screen or a CGI shot, which is a true testament to the camera crew and post-production team who crafted this film.

The visual sleight of hand is so impressive that honestly there are clear moments where you cannot tell if they are actually up that tower or if all of it is just post-production work. Thanks to these elements, the film truly raised the stakes in terms of what can be done with a small budget and impressive digital trickery and I can’t wait to see what’s next with these elements at the filmmaker’s disposal.

‘FALL’ is now playing in theaters.