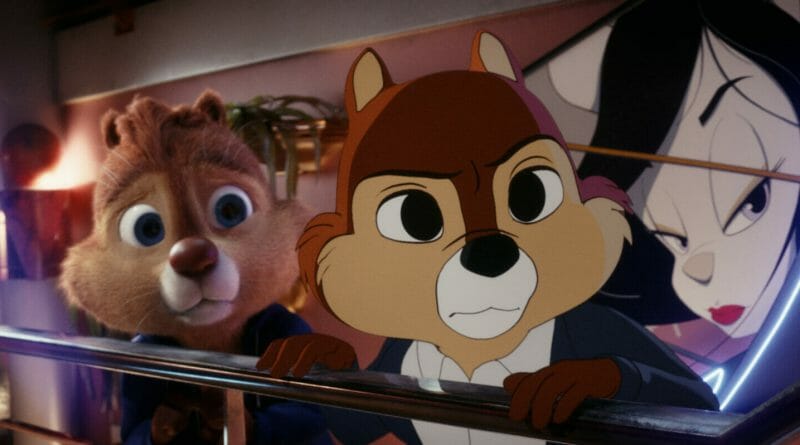 
Chip ‘N Dale: Rescue Rangers has their cake and eats it too by bringing a gazillion Easter eggs and references while also providing a heartfelt tale of friendship and regret.

Disney+ newest film Chip ‘N Dale Rescue Rangers reunites our titular heroes Chip and Dale after 30 years since they aired their original TV show. Chip is working a day job and Dale is doing everything he can to stay relevant. Everything changes when they have to save a mutual friend from imminent danger.

It’s quite the task trying to review this film without going too much into detail regarding the plot and much less the exorbitant amount of easter eggs, references, and cameos this film throws at you every 5 seconds. But there are still things to be discussed regarding the character arcs, the themes, and the messages the film is trying to convey. I’m a perfect example of a general audience going blindly into this film since I never grew up watching Chip ‘n Dale back in the late 80s. So I’m observing this more for the story structure, how their story propels and how it lands in its execution.

In that regard, the film succeeds, giving us a story that’s familiar but also approachable no matter what you saw growing up. Because it’s not only a celebration of the icons Chip ‘n Dale, it’s a celebration of EVERYTHING you grew up watching. And I’m not joking when I say EVERYTHING either. This film is baffling in terms of what it got away with, reference-wise.

There’s a decent amount of effort in the filmmaking and the usage of different animation styles to convey the gamma of what the animation genre has to offer. The film had no business being as good as it is, but it is. There’s a lot of meta and self-referential humor throughout the film. It pokes fun at a lot of the industries as a whole, at some characters, and the business practices of Hollywood itself. There’s no true restraint, playing around with what they can get away with in terms of critiques of the nature of the Hollywood lifestyle while also making sure this is a film the whole family can enjoy.

It’s a movie that doesn’t rely on your deep knowledge of the original tv series, which is excellent. This is because the film is not about that, it’s about a fractured friendship trying to heal after horrible business decisions destroyed everything they had, which are very relatable themes people have gone through, thus making the whole narrative universal as a result. Every audience member can identify with the plight of Chip and/or Dale since they are both fighting their inner demons trying to overcome the tragic event that shattered their budding alliance.

As I previously mentioned, the narrative does take an interesting angle when it comes to critiquing the industry, how the Hollywood system essentially uses and abuses you, and when you’re no longer relevant it shoves you out and forgets about you. It’s a very cold way to approach this subject matter, but I appreciate that it decides to show the dark side of being a star and commuting to it, something all too real for a lot of young actors.

Watch Chip ‘N Dale: Rescue Rangers confidently without having to understand the deep lore of their original series, you can go in blind and still come out loving something about this film. It’s a darn shame this movie didn’t get a wide theatrical release. It’s clear this was meant to be seen on a big screen and then dissected for all the gazillion easter eggs up on the screen. Can’t wait to see the thousands of articles listing every single easter egg and cameo this movie contains. It will be far more than Space Jam: A New Legacy, trust me.

Want to discuss things further? Hit us up on Twitter, Facebook, or Instagram. And for more film, gaming, anime, and TV news, trailers, and updates make sure to keep it locked at The Nerdy Basement. While you’re here, please consider supporting us on Patreon! It’s an easy way of supporting us so we can keep providing you with your Nerdy News!