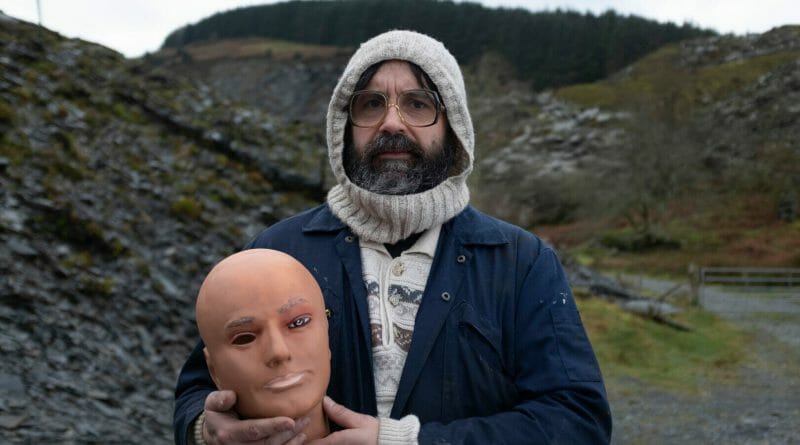 “If you don’t try things, you don’t succeed do ya’? You just gotta keep trying.” This simple quote early on in the film’s runtime concisely summarizes the drive the main character Brian (David Earl) has throughout. It’s about a man who is driven to create something that many of us can relate to if we have a minimal creative background. And through his off-kilter creations, Brian finds peace with himself, even if it’s a lonely way to live. With its dry British humor, we enter his world and his weird machinations and lifestyle in this humble little town.

The movie is very unassuming and incredibly unoriginal. But where it lacks in those aspects, it makes up for its charm, wit, earnestness, and wholesomeness. Based on the 2017 short film of the same name, this feature film expands the initial concept presented, adding a small roster of supporting characters to even flesh out the narrative of a man and his robot friend. I loved the short film when I saw it back then. It was very endearing and perfectly structured for the short form. So my curiosity peaked when I realized they made a full-fledged movie with the same idea.

Not all short films work as a feature, a case in point is the 2012 short film Curfew by Shawn Christensen which later evolved into Before I Disappear, released 2 years later. Christensen expanded his idea to no avail, seemingly just adding a lot of filler to pad out its incredibly simple premise without adding to the character arc the dual protagonists endure. However, Brian and Charles does not suffer from this issue. It has a  tight and efficient running time and even though people might see some filler occurring in the movie, I see it as opportunities for some offbeat humor and beautiful character beats, and growth between two unlikely friends.

The film opens with a mockumentary aesthetic that echoes Ricky Gervais’ famed series, The Office. Funny enough, David Earl is a frequent collaborator of Gervais, which I’m pretty certain influences the decision of its genre and tone. We meet Brian in his humble cottage in rural Wales, where he introduces himself to the camera crew and showcases his terrible, but creative inventions. He seems to be a lonely and terribly introverted man but he tries to see the positive things in life. One day scavenging for parts, he finds godly inspiration and creates a robot.

Said robot doesn’t come to life at first, but after a story beat, the robot turns on in the middle of the night and reads the full dictionary. Brian is ecstatic that his creation didn’t implode and decides to name him Charles. Charles (Chris Hayward) is jovial and filled with childlike wonder. Charles wishes to learn and experience life, which is a stark contrast to Brian’s lifestyle, which eventually creates rifts between them. The robot design is very frugal but it’s definitely the thing that adds a higher level of charm to the character. It’s creepy, but adorable and hilarious at the same time.

The movie establishes Hazel (Louise Brealey), a meek and unassuming woman who lives with her mother and starts to build a budding awkward friendship with Brian. It’s adorable how they both stammer to get their words out and try to connect with simple syllables at points. As the story develops we find the antagonist of the picture, Eddie (Jamie Michie), lingering around the town messing with Brian, hinting at a troubled past between them – a very classical bully. He taunts Brian excessively, treats him badly, and tries to steal his robot from him.

He doesn’t add much to the story beyond causing friction and troubles for Brian and Charles, but his character is sufficient for the plot at hand. Charles yearns to travel to Hawaii and see the world, which obviously Brian is dead set against. The robot slowly breaks the man out of his social shell. Together they build a symbiotic relationship where one learns to live and the other learns responsibility and maturity. A lot of the running time is devoted to Brian hiding Charles from the outside world because Brian fears Charlie being found and possibly being stolen by Eddie and his family.

Hijinks ensue and bitterness grows between Brian and Charles since both are setting different goals for themselves. Brian starts neglecting Charles and spending more time with Hazel, which ultimately ends in Eddie stealing Charles from Brian’s cottage after failing to buy him outright. The final act is a typical ‘confront the bully’ sequence, but with the unique thematic message, the film is conveying. So, in the end, don’t expect some fist fights in its climax; instead, there’s something a bit more creative.

There’s a beautiful emotional beat between the man and his robot as they both come to terms with acknowledging each other’s wrongdoings and forging each other. It’s truly adorable and endearing all the way through. It might be a film that not a lot of people see, maybe because of a limited theatrical release window or because there hasn’t been a lot of marketing. Nevertheless, it’s a solid, idiosyncratic, lovable, and quiet movie about friendship, maturity, creativity, and experiencing life to the fullest, but at your own pace.

Brian and Charles is now playing in theaters.