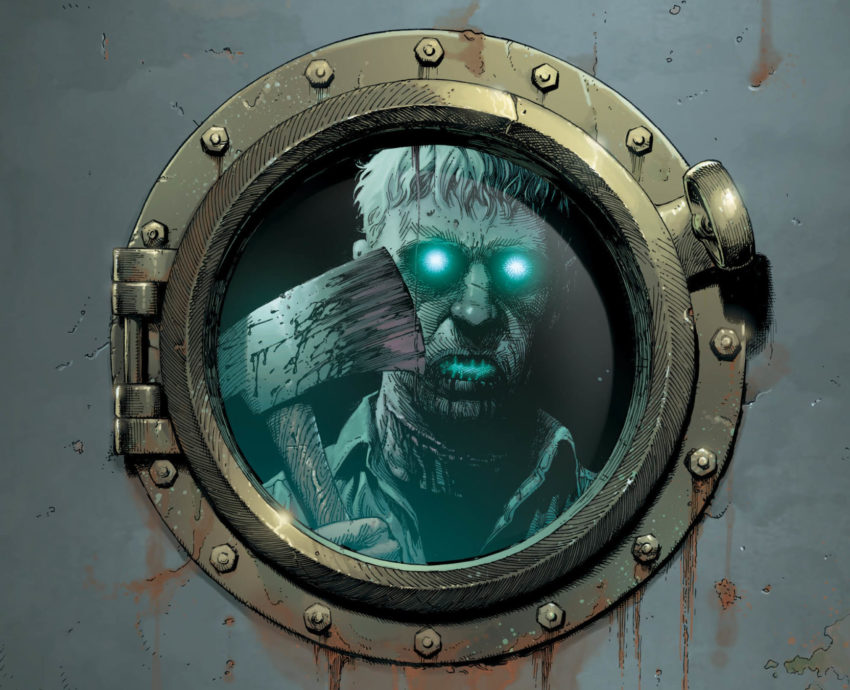 Joe Hill takes us back to the spooky island in Plunge #2 and after Moriah’s discovery from last month’s debut issue. Things have now taken a bad turn and as the mystery around Derleth and this newly discovered corpse start to unravel.

Plunge #2 begins exactly where Plunge #1 left off. Moriah has discovered the dead corpse of a man with worms in his throat. Unfortunately for her, these worms have spoken out to her, calling her by her name. How? Wouldn’t you like to know…

The remainder of the team is now aware of the dead corpse discovered by Moriah which sets off a chain reaction of appalling shock. Every member of this crew is reacting differently about the discovery of this corpse. Rightfully so, I mean, who wouldn’t? Because finding a dead corpse on a remote island after a ship that sunk to the bottom of the ocean suddenly reemerges and puts out a distress signal is perfectly normal and happens all the time!

As the team revels in their shock and try to calm each other down, we learn that this crew is not alone on this island. There’s a group of men hiding in the woods, looking over at the team as they are surrounding this corpse.

The team has now set off on a search and rescue mission to see if there are any survivors or corpses anywhere else on this island, as the dead corpse is now transported onto the main ship where the crew initially met. Here’s where things really start to take a turn for the worse.

On the main ship, the team sends out an R.O.V. to further study the Derleth and upon arriving there they discover a giant eel-like creature. Clearly mutated. This f**** is HUGE! Sized up with R.O.V., the R.O.V. looks like a mere toy. Back on the island, Moriah and Clark have started their search and rescue near the beach. Discovering not ONE but TWO mutated crabs. One is beached and dead and the other is on a rock on the shallow waters of the ocean.

Against Clark’s suggested actions, Moriah risks hypothermia to reach this crab that’s perched upon the rock. All in the name of research (curiosity really kills the cat….methaphorically speaking of course!).

Back on the main ship, the formerly dead corpse is now alive and has killed a crew member after knocking out the ship’s electrical power. I’m going to safely assume that this corpse is some type of zombie or some kind of reanimated dead person who’s also mutated. Just like the crabs and the giant coochie creature that ate the R.O.V. like a snack.

On another part of the island, Russ and Bill are conducting their search and rescue mission up on the mountainsides. They stumble across these numbers and a cave. Against Bill’s better judgment Russ also takes off to further discovery all in the name of research, until he makes an unsettling discovery.

Plunge #2 really upped the ante with this second issue. Perfectly blending tension and suspense to push the story forward to always keep you guessing even if you think you know what’s coming next. The art also adds that extra layer to the suspense that’s needed. Something I personally thought was lacking a bit in Plunge #1.

Plunge #2 written by Joe Hill with art by Stuart Immonen is in stores now!

A NEW TEAM OF HEROES COMES TOGETHER IN THE NEW WARRIORS #1 TRAILER! Previous post