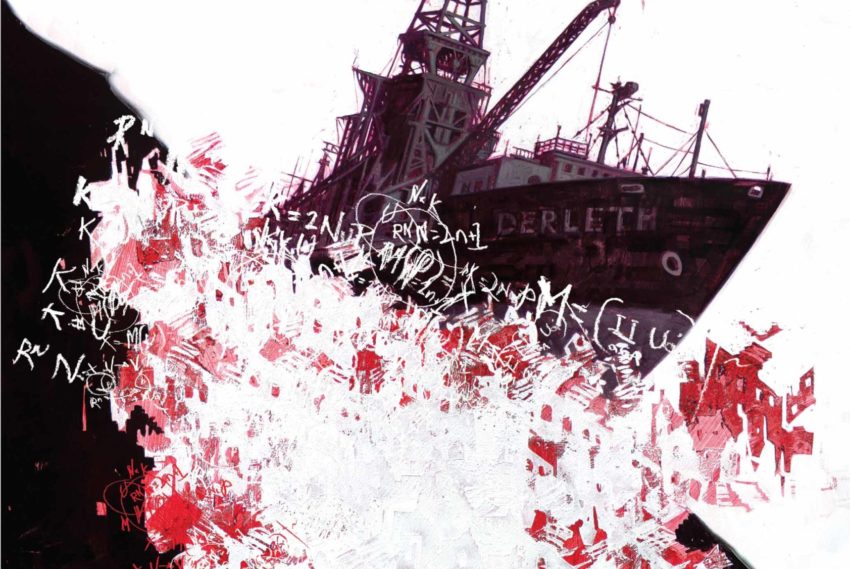 Joe Hill’s Hill House Comics brings forth another solid entry in the form of Plunge #1. We’re all fans of ghost stories, right? I know I am, so seeing that this title would be a sort of spin on that really intrigued me. Of course, seeing Joe Hill writing another original series is always an added attraction.

I’m going to give a courteous spoiler warning just in case I spoil anything crucial to the story. I will try to keep spoilers brief but just in case I don’t you have been warned!

Plunge #1 follows the story of a salvage crew who is sent to salvage and recover a now reemerged ship, that was sunk at the bottom of the Arctic Ocean for 40 years and who’s 32-man crew was entirely lost along with it. It seems simple right? I mean what can possibly go wrong when a ship that was at the bottom of the ocean for so long reemerges and sends out a distress signal? Totally fine! Nothing to really worry about. Right?

That’s essentially the premise of the story, in this first issue at least. And while nothing extreme happens in this issue (well not at least until we get to the final page of the issue), Joe Hill does an exceptional job of building up the mystery of the story without giving anything away. And that’s something we would want and expect from a horror comic or a horror story in general. Let’s build-up the mystery and when s*** hits the fan then let’s fully dive into it.

There’s a lot of exposition in this issue so there’s a lot of information to take in. But it gives you a lot of insight into the history of this ship, what happened to the ship and it’s former crew members, and how important this ship is, how important the crew members are, and the importance of the crew’s research. One of those being that this ship, The Derleth. Was a state of the art ship with start of the art underwater mapping and oil exploration technology. Not only that, one of the crew members, was the son of Rococo’s former CEO Arthur Breem and he is…well…no longer with us.

But there’s also the environmental research data that’s on that ship. Two Arctic birds and an eel who have now gone extinct. So everything in, out and about this ship is highly valuable to Rococo and the U.S. Government. After the crew is assembled, they venture out to explore the ship. But before they fully dive in, they decide to set up camp for the night. Everything is all fun and games until the Marine Biologist Moriah Lamb breaks off to relieve herself after a few drinks only to make an unsettling discovery.

She finds what appears to be a former Derleth crewmember, eyeless it seems, being gnawed at the neck by these worm-like creatures, who speak to Moriah Lamb. It’s quite unsettling and quite unnerving, to say the least. But the mystery only elevates. There are so many questions that need to be answered, and we haven’t gotten any answers yet (not that I was expecting to). But the mystery is there and after some build-up, we have reached a point where the cliffhanger starts to add some thickness to the plot.

Overall a solid issue IMO. Well-paced, with great exposition and with artwork that adds to the overall mystique of the story. In the same breath, the artwork is very real-world so there’s not a specific panel or page that really jumps out at you, but the artwork is intricate and well-done and fitting for the story that’s being created. A solid issue for me, especially as a fan of Joe Hill. Go check this one out!

Plunge #1 is out now at your local comic book shop!

Overall a solid issue IMO. Well-paced, with great exposition and with artwork that adds to the overall mystique of the story.

Osvaldo MaderaFebruary 19, 2020Overall a solid issue IMO. Well-paced, with great exposition and with artwork that adds to the overall mystique of the story.9.0110
Your RatingUser Rating: 0 ( 0 Votes )
Share

WOLVERINE #1 - The Best there is Unleashed! (REVIEW) Next post