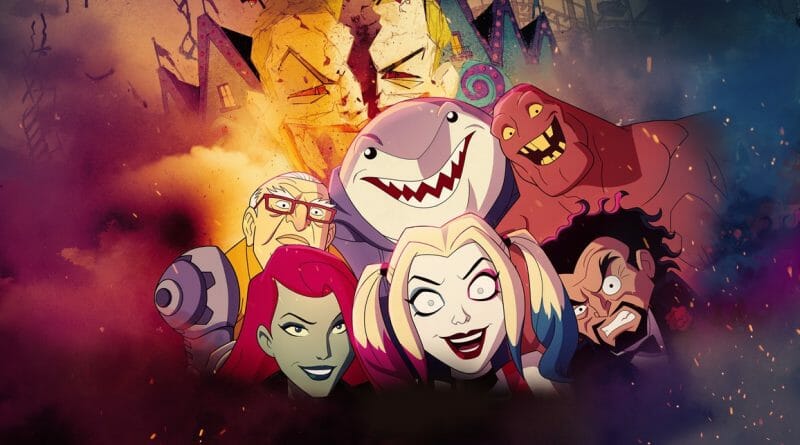 After a sensational 1st season of the DC Universe original Harley Quinn is back today with its season 2 debut. We return to Gotham to see the aftermath of (SPOILERS FOR SEASON 1 & This episode !) Harley defeating the Joker and liberating Gotham. If you remember he took control of the city defeated the Justice League, Legion Doom, and Batman to finally show why he’s the best. Now we know things didn’t go as expected with Harley and team taking him down after some crazy storytelling.

With season 1’s premise revolving around Quinns discovering of herself and separation from the Joker. This episode brings us to a new crossroads with the power vacuum created by both major heroes and villains MIA, Gotham is ripe for the taking. Which Harley doesn’t see is her opportunity, but her chance to enjoy some of the good life. The only issue is the rest of Batman’s rogues dont feel the same way. After many attempts to take over Harley’s hideout, she decides to take away the strength of the villains, their henchmen.

After liberating the goons the likes of Two-Face, Bane, The Riddler, The Penguin, and Mr. Freeze they decided to create a league of their own; the INJUSTICE LEAGUE! Now things kick it up a notch from here. With the exemption of Harley, the group divides Gotham evenly (Think Batman Arkham City) to control a part of the city. Leaving Quinn just a tiny piece. She hates the idea obviously but is caught off guard by the quick response of Mr. Freeze. Harley is frozen in ice and put on display.

We now see the great divide of territories. Jim Gordon desperately looking for answers, and the villains thriving with their newfound agreement. Penguin has Quinn on display in the middle of his Iceberg Casino and things couldn’t be running smoother. We later learn Harley was frozen for about 2 months. The Injustice League already controlled it all. But with the help of her crew Poison Ivy, King Shark, Clay Face, Doctor Psycho, and Sy Borgman. They finally succeed in rescuing their insane leader. And with her liberation, she gains the better of The Penguin (SPOILER) and let us say he won’t be gambling much more.

Harley and Crew now have a new mission in payback. By taking down the Injustice League and taking over Gotham as Ivy recommended from the beginning. So now after that recap, I have to say I loved the episode. The series is a fun surprise. Never expected the raunchy, hard-hitting jokes, and gore action sequences would take so well. To say I was worried about the direction after the last episode of season 1 is an understatement. One episode in and I already want more Harley Quinn. The cast is phenomenal and the timing for satire is all on point. Pretty much laughed from beginning to end.

To think this is something that we all didn’t know we wanted and couldn’t be happier we got it lol. The best things about this series is there are no rules. We cant guess what they will do next. And most importantly It is a series that Harley holds up on her own without the support of Joker or Batman. This is HER SHOW! The mature series is great fun and with so many awesome cameos in the works, we can’t help but be excited to see how they play into the show.

Again I can’t wait for episode 2! I’m expecting more hilarious jokes and bloody animated action throughout. But let me stop being a fanboy. This premiere gets a 9 out of 10 from me. Just for the fact it’s hilarious! Harley Quinn season 2 drops today April 3rd, 2020. Go check it out!