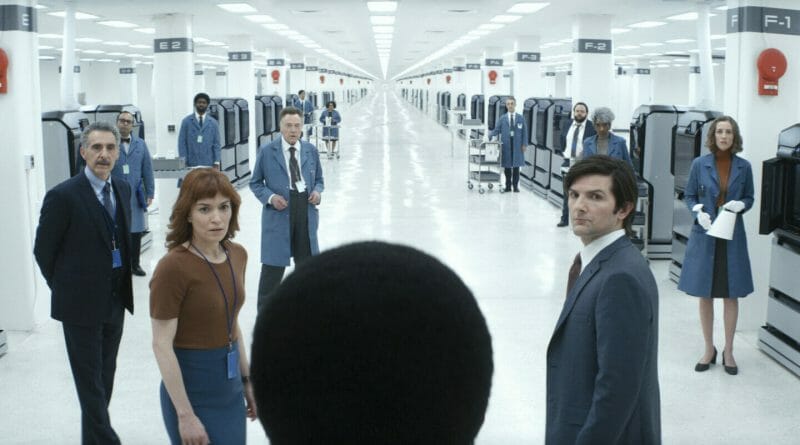 ‘Severance’ Review: Audacious and Cerebral, The Latest AppleTV+ series Feels Like A Glitch In The Matrix


From the brilliant performances to the alluring direction from Ben Stiller, ‘Severance’ boasts an absolutely arresting first season.

What was once mind-blowingly original in the decade past, may have been churned into modern-day storytelling tropes. Today, you will find a ‘Tyler Durden’ in every aspiring screenwriter’s writing sample. Everybody nowadays is playing with memory and time travel, and god forbid the entire movie is revealed to be… all a dream? Not to mention all these adaptations, and sequels, and prequels, and pre-prequels, and the reboots, and the remakes, and the multiverses– the goddamn (derogatory and respectfully) multiverses!!

2022 has proved quite the year for ultra-original works of art (and we’re only 4 months in!) with Daniels’ masterpiece Everything, Everywhere All At Once, the return of the greatest television series of all time, Atlanta, Eggers’ The Northman, hell, even Moon Knight feels fresher than most of Marvel’s output. What a time to be alive! With something as subtly outrageous as Severance, the gifts keep on giving.

Severance gets it right from the jump. It’s not unheard of for a series to open with out-of-context scenes but there’s something about the first frames of Severance that feels so tense. A bird’s-eye shot of a woman lying out on a table, a subtly retro 70’s set design and a disembodied voice coming out of an outdated radio. The woman on the table is Helly and she’s just begun her first day on the “Severed Floor”. She awakens and is immediately set into a panic from her unfamiliar surroundings.

She’s also frightened that she cannot answer a simple question from the man on the radio like: “Who are you?” In these moments, we share the atmosphere with Helly, we are given nothing but these frightening open spaces within a tiny room. And when the scene comes to a close, Adam Scott’s shadowy appearance makes things come to a boiling point when he delivers the line: “That’s a perfect score.” And just like that Severance’s pilot is set into fierce motion.

I cannot express the importance of diving into this series knowing nothing. For those of you that just can’t do that, Severance is a workplace drama that follows the lives of corporate office workers on the “Severed” floor; an underground office where workers’ memories are surgically separated between personal life and work life. This premise has insanely rewarding implications that are masterfully laid out throughout the course of 9 episodes.

We explore just about everything in this series, corporate greed, love, grief, what it means to have a soul, and the list goes on. Severance is such a rarity that’s awarded to very few shows on the air today; everybody and everything in this series work in complete harmony with each other. Editing, writing, performances (!!!), set design, and most importantly, direction.

Seeing a Ben Stiller directing credit has never really been the most exciting aspect of… anything really. And that’s not a diss on Stiller, The Cable Guy gang, where are you at??? However, Stiller’s connection to the material is made evident through his directorial efforts. Reminiscent of Fincher’s work on Zodiac, his work on this pilot alone visually works in harmony with its premise. His use of negative space is quite exhilarating when it comes to depicting cramped spaces.

Lumon’s winding hallways and minimalistic interior design are captured with such artistry. Stiller blocks every scene with the intention of capturing the severed floor as if it were a character as well. The visuals from the pilot never let up, the whole series is filled with interesting angles and camera movements. Stiller does a fantastic job in the director’s chair.

The performances in Severance are extraordinary. I can go on about Adam Scott’s central performance and Patricia Arquette’s off-kilter turn as Mrs. Cobel but there is one singular performance that stood out to me. John Turturro as Irving is revelatory. He presents this innocent pathos and that works hand in hand with the damning sense of intense repression within his character. His performance encapsulates every human emotion that we experience from a child into high adulthood; love, sadness, anger, and most importantly, innocence.

When asked about their theories about what their work does for the outside, Mark pays it no mind, and Dylan (brilliantly portrayed by Zach Cherry) unravels his theory on how humanity above needs their help to mine land underwater. Irving has his theory but it’s nowhere near as outrageous as Dylan’s. He believes their work removes curse words from movies.

In one of the more compelling arcs in the series, Irving begins to fall in love with Burt from Optics (the marketing division of Lumon). Every character in their show has their meticulously laid out motivations, but Irving’s seems to be the purest. What drives Irving to do what he does, is his love for Burt. And when that love is taken away, Irving displays a boiling rage within him. Turturro makes Irving a compelling, three-dimensional character. Quite literally one of my favorite performances to come out of a series. In a world where I have to wait for Tom and Greg to return in Succession, Irv and Burt can keep me company.

Ending with an incredibly explosive cliff-hanger, I and many viewers find solace in the fact Severance has been picked up for season 2. This season is brimming with narrative choices and riveting loose ends that keep this series going for a rewarding 5 seasons. From the performances to Stiller’s stellar (ha!) direction, Severance truly feels like a glitch in the matrix. From start to end, I was hopelessly addicted and I cannot recommend this series enough.

Severance is streaming now on AppleTV+