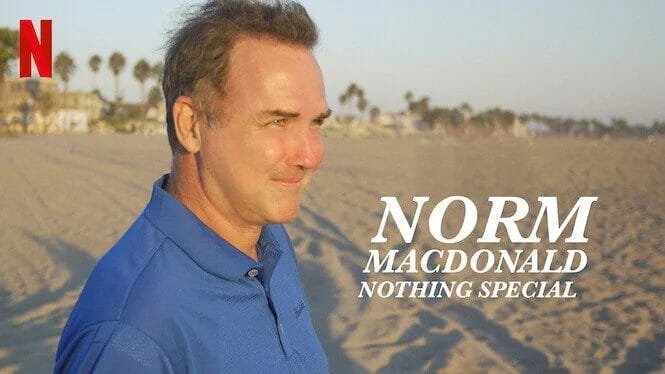 Norm Macdonald’s ‘Nothing Special’ is Nothing Less Than Tremendously Special


A farewell that’s hilarious as it is deeply moving and transparent. An earnest look intoNorm Macdonald’s last days through absurdity and genuine moments of existential clarity

“I ain’t no sap!” Norm Macdonald declares halfway through his posthumous comedy hour titled: “Nothing Special”. It’s an odd time for comedy in that general audiences have never been so divided on what they want from a comic. Do they want the brash and outdated observations on modern society that works to offend? Do they want glorified and unfunny monologues that are praised for bravery and the comic’s transparency? Do they want Joe Rogan or do they want Hannah Gadsby? There doesn’t seem to be a middle ground. Maybe there is but they aren’t going to break through the barrier of arguing audiences.

Who would’ve thought it’d be comedy’s signature rambling man to make sense of it all? In ‘Nothing Special’ Norm Macdonald mentions he’s heard some describe comics as “modern-day philosophers”. And in his unmistakable folksy cadence, he responds to that with “That makes me sad for the actual modern-day philosophers” — Out of all the brilliance this special has brought, this statement here is immensely important. Norm has never been the unapologetic, i-don’t-care-about-your-feelings comic. But he’s also never been the comic to stand up and speak for those without a voice.

He can only speak for himself, which includes: whacking off, the “Tee-V”, and a fella he met at the bus station. Whether it’s talking about trans rights or the seriousness of real-world issues, there are many comics today that are selective on what statements they want to be taken seriously. If comics are the modern-day philosophers, Norm Macdonald’s stamped philosophy was: “Don’t take anything this lump of coal has to say seriously”

I’ve always believed Norm could’ve been a wise philosopher. His comedy is riddled with absurdity, but embedded deep within are ideas that question a lot of the world’s and society’s functions. Filmed a year before his passing (and in one impressive take), we find Norm Macdonald reckoning with a lot in his life up until that point. The special opens with a brief dialogue that reveals where Norm is in life. In the middle of prepping for a new Netflix special, the pandemic shut his plans down. Expecting the worst of an upcoming procedure, the comedian was eager to film the material and not “leave anything on the table in case things went south.”

News of Norm Macdonald’s death shocked many for its suddenness. Friends close to Norm revealed he’d kept his illness a secret for 9 years, so when a posthumous special was announced, I wasn’t sure what to expect. The closest Norm gets to diving into the idea of death, is a riotous rambling on cannibalism. Norm has a way of planting a seed underneath a mountain of absurdity and nonsense to then show off a fully blossomed punchline. It’s a brilliant trademark of Norm’s comedy that’s on full display in this special. He’s incoherent as usual but his ideas are fully formed.

He ends the cannibalism portion with a bit on the ridiculousness of human remains. Saying he doesn’t understand the infatuation with remains, he resolves that his Mother would want something of himself to remember him by. He ends the bit with: “I didn’t know Norm had 3 ears!… I guess none of us knew him when you get down to it.” He never laments and he never reveals too much about his situation but it is still the most transparent I’ve seen Norm.

He begins his special with his known gambling addiction. Anybody that’s a fan of Norm Macdonald knows about his gambling. He seldom talked about it in his comedy so the decision to open his special with it seems intentional. There are moments littered throughout the special where Norm is genuinely sincere. He’s gotten to an age where if the words “trans-people” or “Native Americans” come out of his mouth, any normal person would be worried about what’s next. But Norm’s comedy has never been hateful and it’s never been shocking. Here, he tackles subjects such as these with a subversive snark by making the joke centered on him or making a sincere observation.

In the example of trans-rights, Norm reflects on the viewpoints of his father, who he recognized as a flawed man with flawed views. In this contemplative moment, he remembers his father and the hateful viewpoints he held on the LGBTQ+ community and acknowledges the hate but adds to it with the good his father demonstrated. He’s never disrespectful and he never blames terrible viewpoints on a “different time” which is a route many comics these days take.

Norm Macdonald would never admit it or acknowledge it, but he truly was a glitch in the matrix in comedy. A comic that THRIVES in silence. Whether it’s going to a roast and delivering the most-outdated jabs from a joke book. Or telling distasteful jokes during the height of the O.J. Simpson trial. Or filming a new comedy special in his living room with no audience.