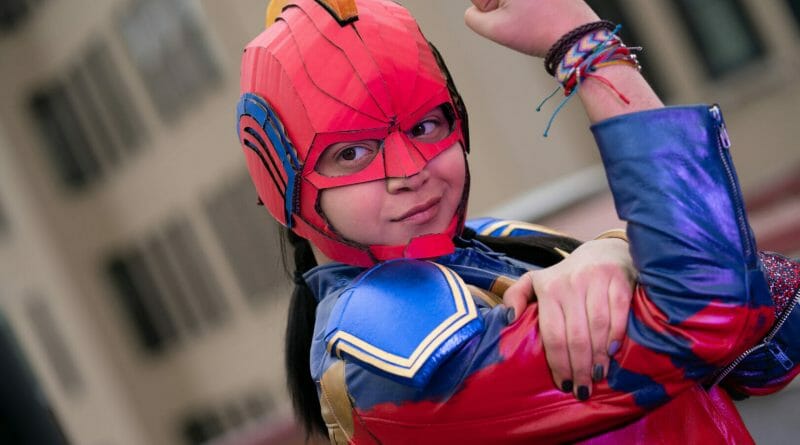 
Ms. Marvel has delivered a super strong start to the series which is something many of the MCU/Disney+ shows have been lacking

Ms. Marvel continues to prove why it has the strongest start to an MCU/Disney+ series since WandaVision. Iman Vellani continues to charm us through her performance as Kamala Khan and as a new hero who is trying to find her way. But a newly found confidence pushes Kamala out of her comfort zone and fully embraces her new moniker, Night Light. Despite Zoe stealing the majority of the spotlight due to being saved by Night Light (Ms. Marvel), Kamala and company decide to attend Zoe’s party for personal reasons.

After a brief training montage, we find Kamala and Nakia attending the local Mosque immersing us more into religious traditions in Arabic culture, while also showcasing how society within Arabic culture views women. This point is driven home when Kamala speaks out of turn, and when Nakia reveals to Kamala why she can’t run for the Mosque Board.

At Zoe’s party Kamala, Nakia, Miguel, and Bruno are fully introduced to Kamran, the new senior attending the high school. After the cops crash the party, Kamala and company ride off with Kamran. The two find common interests in Bollywood films and music. After dropping them off, Kamran and Kamala exchange numbers to set up driving lessons for Kamala.

Something that Ms. Marvel has been doing exceedingly well is its use of lighting and its surroundings to visually express how Kamala is feeling, on top of Kamala physically expressing her excitement or disappointment. Whether that’s the heart-shaped neon lights on the bodega, emojis surrounding Kamran when he exits the pool, or the cosmic lighting that resembles Kamala’s newly found powers after she arrives home.

It all adds a layer of expressiveness that makes it that much more engaging. It’s something that’s been done since the very first episode and it continues to be a trend here in the second and one can only assume it will continue to be a trend as the series continues. There’s also been a huge focus on Nakia and how she views the world as both a woman and as a person of color, not just within her culture but also in society outside her culture.

She touches on something super important to almost all people of color, not being enough of either side of the coin or being too much thus not being able to truly fit in. But despite that, she embraces who she is and takes a deeper stand for what she believes in, feeling that she doesn’t need to prove anything to anyone, including her folks at home.

Although Kamala and Nakia are both dealing with a lot, Bruno has now been given the decision of a lifetime. Stay in Jersey City with his friends or ride off to California on a full ride to achieve his dreams. While we don’t get a clear-cut answer yet to his decision, I’m interested in seeing how he handles this situation.

Shifting our focus back to Kamala and Kamran, the two bond over an afternoon lunch in which they run into her older brother Aamir and his fiance. Kamran and Kamala seem to be hitting it off but things seem a little too good to be true, more on that later. Back at the Khan household, the family is bonding over dinner and we learn more about the Khan family, why they moved to America, and their family history in Karachi.

We learn about the Partition, the British invasion, and the civil war that ensued in their wake. We see that this is a touchy subject for Muneeba as she quickly deflects the conversation and leaves the table. Abbu, Kamala’s dad tells the story of Muneeba’s mother, Sana, and her escape during the Partition. The focus of this story heavily points to the deeper mystery behind Kamala’s family, which ties into the bangles that awakened Kamala’s powers and those visions she has been seeing.

Could this be Sana or Aisha? Kamala’s visions seem to point in that direction, but the answers are still unclear even after she calls her grandmother, Nani. While Kamala’s powers may seem cosmic, they seem to be hereditary and awakened with this bangle that is now in Kamala’s possession. However, we have yet to see any Inhuman or Kree connection to Kamala, her family, and these powers.

At the Eid Mubarak festival, Kamala, Nakia, and Bruno go around campaigning for Nakia while Zoe is being interviewed by the Department of Damage Control as they attempt to get Zoe to reveal more about the “enhanced” being (Kamala). These two individuals are super condescending and rub me the wrong way, which means they’re doing their jobs as the villains. The question remains, why are they so desperately trying to go after Kamala Khan?

Who else have they targeted and why is the FBI involved with surveilling enhanced individuals anyways? Again, more questions than answers, but after saving the Mosque shoe thief, Kamala has her first encounter with the DODC, who seem to be using Stark tech and Stark drones to track Kamala down and while she manages to escape thanks to Kamran, she runs into more potential trouble as we are introduced to his mother. Who is coming off as quite menacing and has been waiting to meet her?

As I said, things with Kamran seemed too good to be true. He’s a new senior at the school, and immediately goes out of his way to befriend Kamala, and get her information and just so happens to be at the right place and at the right time, more so with his mother in the car. Ms. Marvel has delivered a super strong start to the series which is something many of the MCU/Disney+ shows have been lacking.

The series with just two episodes in the books have also found a much steadier pace than what we are usually given in a six-episode series. Visually and aesthetically, Ms. Marvel is much more engaging than the MCU’s most recent fare, Moon Knight, the VFX, and the CGI department have done a swell job at making Ms. Marvel’s new powers look pleasing and stylish, even if they’re being adapted differently from the comics.

Iman Vellani and her supporting cast members, especially when it comes to her family members continue to bring this charming family dynamic to the MCU that we have not seen in quite some time. That time being the aforementioned WandaVision. Vellani’s onscreen presence is what keeps this show as engaging as it can be even though there isn’t much going on. With episode three of Ms. Marvel on the horizon, one can only hope that the series continues being this strong and keeps up its momentum leading up to the finale.

Want to discuss things further? Hit us up on Twitter, Facebook, or Instagram. And for more film, gaming, anime, and TV news, trailers, and updates make sure to keep it locked right here at The Nerdy Basement. While you’re here, please consider supporting us on Patreon! It’s easy to support us so we can keep providing you with your Nerdy News!