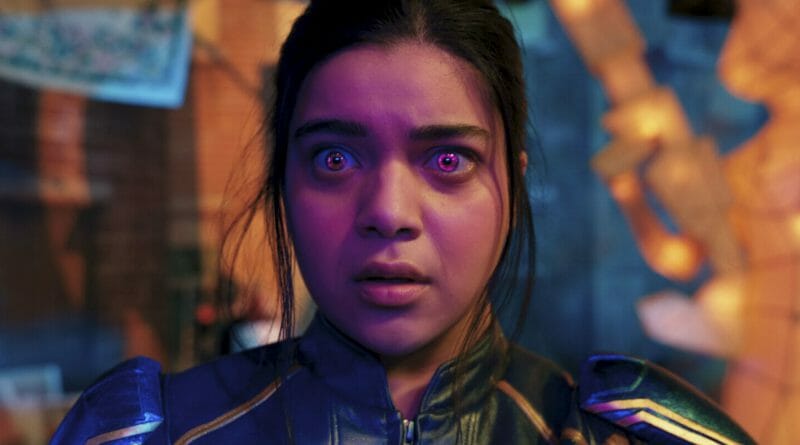 
Kamala Khan has finally made her live-action debut in the Marvel Cinematic Universe, being portrayed by newcomer Iman Vellani, Marvel fans from around the world will now set their eyes on the future Young Avenger as the Ms. Marvel series premieres this week on Disney Plus. This coming-of-age story puts Kamala Khan front in center in her very own origin story as she discovers her new powers and aims to be the superhero she’s always aspired to be and has always looked up to, Captain Marvel.

We meet Kamala Khan in the MCU’s version of Jersey City, New Jersey where Kamala lives with her family. We are quickly introduced to Kamala’s admiration for The Avengers, most specifically Captain Marvel as she recounts the events of Avengers: Endgame. This quick introduction to Kamala is filled with in-world references like Captain Marvel’s disappearance and how people believe she abandoned humanity but don’t exactly know her whereabouts, Ant-Man has a podcast and Kamala is also producing a video essay on why Thor is a gamer, another reference to Avengers: Endgame, and Thor’s interaction with NoobMaster69 while Korg played Fortnite.

We are also introduced to the Khan family as we meet Kamala’s parents Abbu and Muneeba, and her older brother Aamir as Kamala gets ready for her driver’s test. After failing her road test, we meet Kamala at the Coles Academic High School, visibly seeing how little she feels in this school, despite having a small group of friends, those friends being Bruno and Nakia. After a run-in with the most popular girl in school (who just so happens to have a huge following on social media), the trio discusses attending AvengersCon, a super fan convention dedicated to The Avengers, and Kamala’s Captain Marvel cosplay which she will show off in the cosplay competition.

There’s a heavy focus in this episode on everyone around Kamala Khan wanting her to center her focus on herself to attain her goals and brighten her future rather than focus on her fantasies and fangirling over Captain Marvel. This is showcased through the school’s guidance counselor and her parents, most specifically her mother. That is hammered home as Kamala reveals to her parents that she would like to attend AvengersCon with Bruno. Something her mother is strongly against.

This discourse brings to the forefront the conflicting ideologies of immigrant parents with first-generation children as they each have a very different perspective of the world around them. Kamala wants to be a normal teenager like the rest of her peers but her parents hold to their traditions and upbringing thus creating that inner conflict that almost all immigrant parents and first-generation children deal with on an almost daily basis. And while understandable, being raised in a household this way can make you feel caged in, which is something Kamala is visibly dealing with.

But the bigger picture is not entirely clear, as throughout the episode Kamala and her mother clash due to these ideals and Kamala being so obsessed with AvengersCon and Captain Marvel that her mother feels like she is losing sight of what’s truly important, her story and her future, and her place in the world. This plays more into why her mother is so overprotective with her as opposed to her older brother Aamir, which is the mystery behind Kamala Khan’s family and her grandmother Nani. Once Kamala comes in possession of her Nani’s bangle you see Kamala’s mother put up a defensive barrier almost immediately. Something sure to come into play much later in the season.

This is further solidified during AvegnersCon when Kamala Khan first wears the bangle and is thrown into this visual cosmic trip as a cosmic aura shrouds her before going on stage to join the cosplay competition. This, of course, is a huge deviation from the comic book source material and while not entirely welcomed, it does add an extra layer to the story that is worth exploring, solely because it adds an extra layer to not just Kamala Khan, but also her family’s lineage.

And while her embiggening powers are drastically different compared to the comics, adding this cosmic, crystalized look to her powers is a welcomed change and it turned out to look much better in the final product than previously anticipated. Marvel Studios has been struggling immensely when it comes to the CGI and VFX department of their Disney Plus shows, Moon Knight was most evident of this, and most recently the She-Hulk trailer didn’t sway fans in the right direction either. However, as for the VFX and CGI in Ms. Marvel so far, I think Marvel has found a nice medium for now.

The biggest takeaway from this premiere episode is the series lead, Iman Vellani who is the living embodiment of Kamala Khan. It’s just in her! And as we’ve seen the creators behind the scenes mention multiple times, including the co-creator of the Ms. Marvel character herself, Iman Vellani IS Kamala Khan. Now, I will have to agree with the discourse regarding Kamala Khan’s casting as Marvel Studios decided to cast someone who has a lighter skin tone than Kamala Khan in the comics. This has also been a recurring issue in the comics as well as many colorists do not present Kamala Khan in the same skin stone as when she was first introduced.

This is no knock against Iman Vellani because she is great as Kamala Khan and I cannot emphasize that enough; this is a sole knock against Marvel Studios and the casting department entirely as this is not the first time they take a more appealing approach when it comes to casting a character of color, as most recently seen with Xochitl Gomez’s casting as America Chavez. Representation matters and properly representing actual human characters whether they have powers or not is something that needs to be handled correctly and Marvel hasn’t been handling it as it should.

This is visibly noticeable in this first episode as well as any drawings of Ms. Marvel on screen were presented with a version of Kamala Khan with a much darker skin tone, and during Kamala’s AvengersCon planning sequence, the version of Kamala Khan in the actual Captain Marvel costume almost looks white, which is another problem in and of itself.

That aside there is a great deal of Pakistani/Arabic representation in this first episode alone, from the look and feel of a traditional Arabic home to the inner city markets and shops a Pakistani/Arabic person would normally visit. Even down to the traditions and views of Pakistani/Arabic parents and relatives. One can also appreciate the use of the Arabic dialect when the Khan family are speaking to each other.

Overall, despite all of the negative pushback Ms. Marvel has received leading up to its release and my gripes with this first episode, I thoroughly enjoyed watching it. Iman Vellani is fun, charming and as mentioned above, the living embodiment of Kamala Khan. Her supporting cast members only elevate what is already a captivating performance, while also having that Disney Channel sprinkle that way too many people have forgotten about throughout the years in their fight against “wokeness”.

Ms. Marvel may not be everyone’s cup of tea but I encourage you all to give the show a try, don’t knock it until you try it. You may just find Iman Vellani as fun and as charming as everyone else, plus it’s a show you’ll need to watch before watching The Marvels, as Kamala Kahn will be appearing in the film alongside Carol Danvers and Monica Rambeau.

Please stick around for the first of potentially many post-credits scenes which showcase the Department of Damage Control (DODC) now interested in Kamala Khan and her display of powers. Seems like the DODC is hunting down superheroes now rather than cleaning up after The Avengers, why go after a younger superhero like Kamala? That remains to be seen!

Ms. Marvel is now streaming on Disney Plus.