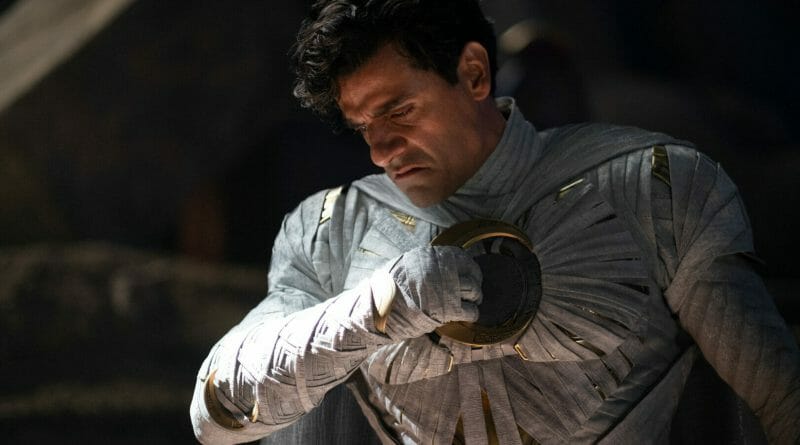 
It’s all laid bare, can Layla free Khonshu and restore Marc with the powers of Moon Knight?

In last week’s episode of ‘Moon Knight,’ we had to sadly watch Steven get frozen in The Duat and left behind. Marc Spector is now in the Field of Reeds. This episode starts off with Arthur Harrow getting the ushabti from Marc’s corpse. Layla, who is after revenge for her husband’s death, follows him, posing as one of his followers. She creeps near him to kill him but Taweret who possesses a dead body stops her and tells her to free Khonshu.

Harrow storms to the pyramid where the other gods’ avatars are, defeating them. He resurrects Ammit whose CGI looks really impressive. You can tell that this episode had a much bigger budget than previous episodes. I love all the details incorporated in her design. She poses as a menacing figure. She tells Harrow that she accepts him as her avatar even if his scales are unbalanced. Layla sets Khonshu free at Taweret’s request. After being freed, Khonshu tries to persuade Layla to be his next avatar but she refuses after everything he put Marc Spector through.

We cut to Marc in the Field of Reeds. Dissatisfied by a peaceful existence without Steven, Marc goes back for him to The Duat. Marc then has a touching speech with his alter Steven[Grant] about how he [Steven] is the only real superpower he’s ever had. It was really sweet to see Marc appreciate Steven, especially after learning how the alter Steven Grant came about in last week’s episode.

They get to the door that will lead them back to the physical world. Khonshu senses Marc’s return from the afterlife and immediately goes to him. Instead of blindly fighting for Khonshu as he has previously done before, Marc and Steven make a pact with Khonshu, that would set them free after they entrap Ammit. Now that they are in sync it’s enjoyable seeing them switch back and forth. There’s also a beautiful scene where Marc takes to the sky as Moon Knight, his cape making a crescent moon. Meanwhile, Layla makes a deal with Taweret to temporary become her avatar after she learned from Khonshu that only an avatar can seal Ammit.

The innocent civilians are having the scales show up on their arms so they can be judged on whether or not they are truly worthy enough to live. Arthur Harrow’s followers begin judging them and if they are not pure of heart they get their souls fed to Ammit. We get to see Layla’s new costume as Taweret’s avatar which is a detailed gold and white costume with dagger-like wings.

The costume design was really well done. She looks powerful. It’s cool that we have another power couple that can fight together in the MCU. As Moon Knight and the Scarlet Scarab take on Harrow and his followers, we see Khonshu and Ammit in a kaiju-style battle in the background, towering over Cairo. Harrow gains an advantage over Moon Knight but suddenly Marc Spector loses consciousness and comes too right before he is about to Harrow.

Steven tells him that he wasn’t responsible. We have seen these sudden burst’s of violence before in episode three with neither of the two having recollection of the events previous. I won’t lie, I felt a little robbed by the end battle, as this was all wrapped up rather quickly. They place Arthur Harrow on an altar and start the ritual to bind Ammit into his body. Khonshu tells him to finish them. That he has to kill Arthur to kill Ammit but Marc refuses. Khonshu sets them free from their service to him. They wake up at Steven’s apartment tied to the bed.

This episode was very good, definitely one of the best ones yet. This episode relied heavily on its VFX. I feel like they did a great job with it for this episode. Ammit’s resurrection was very cool to look at. Her design came off very threatening. Egyptian mythology has always been one of my favorite aspects of this series so having three gods in an episode was interesting to see. I was pleasantly surprised that Layla got to be an avatar.

I really liked her costume and that she got to become the Scarlet Scarab. May Calamawy does an excellent job portraying Scarlet Scarab. Oscar Isaac did amazing as always. If it wasn’t for how great of an actor he is I don’t think this show would be as good as it is. The fight choreography in this episode was exciting. A very action-packed episode. There was also some beautiful imagery in this episode. For example; frozen Steven and Marc holding their heart in their hand.

While this episode was one of the better ones, I still feel like this season really needs more episodes. It just felt a little rushed. Even if this episode showcased more of Moon Knight than others, the lack of the hero throughout the season is heavily felt. I do like the synergy between Marc Spector and Steven Grant now that they learned to appreciate each other. Them switching from alter to alter was an enjoyable sight to see.

I also liked Layla becoming the Scarlet Scarab and the diversity her character brings to the MCU. Representation is important so having an Egyptian woman play such a hero is impactful. The ending was abrupt but the end credit made up for it a little. We get to finally see Jake Lockley, one of the more violent alters of Marc Spector.

He was hinted at throughout the show so it’s neat to finally see him. It was tricky for Khonshu to release Marc Spector and Steven Grant but not Jake Lockley. I hope for the next season we get more of Moon Knight being a hero. I don’t want to see another season with the hero barely appearing. I also hope the next season has better pacing than this one. This season may not be my favorite of the Marvel shows but it was still enjoyable enough. I’m excited about the possibilities the next season offers!

‘Moon Knight’ is now streaming exclusively on Disney Plus.