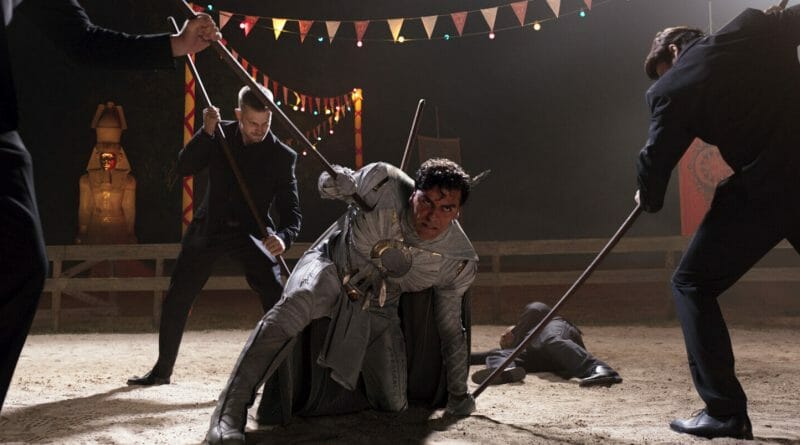 
Can Marc Spector find a way to stop Arthur Harrow from reaching his goals before it’s too late?

This week’s episode of ‘Moon Knight’ begins with Marc Spector tracking down a small group of Arthur Harrow’s followers. It’s an exciting chase scene that has Marc Spector jumping from rooftop to rooftop to apprehend these men for information. You see more of Marc’s mercenary background in the way he fights these men. Steven Grant in comparison is horrified by the violence, telling Marc to not kill anybody.

Before Marc gets to land a finishing blow to one of them, Steven takes over. It was a funny scene to see Marc wake up to find himself in a cab about to go to the airport. He spots the men again and catches up to them to beat any information he can out of them. Steve stops him again. Marc loses time again to find the men around him all dead beside the teen who was with the group of Harrow’s followers.

He is understandably alarmed, asking Steven what he did. Steven tells him this had nothing to do with him. That he is just as clueless Marc is. This leaves more mysteries for us to unravel on which of Marc’s alters could have done this. Marc now only has one person to interrogate. Khonshu tells him to dangle the boy over the ledge of the cliff to scare him into talking. This goes south when the teen kills himself, choosing to die rather than betray his god.

Out of ideas, Khonshu decides to change the weather and the skies to slow Harrow in his search for the tomb. This has consequences for him though when he’s summoned with Marc inside the Pyramids of Giza where he will have to meet with The Ennead. The set design for inside the pyramid where the gods meet is beautifully done. The gods take over their avatar’s bodies to speak with Marc and Khonshu. They gather to hear Khonshu’s account, and Khonshu is warned that if he manipulates the skies again he will be imprisoned in stone.

We find out he’s been banished before for interfering in human affairs. He calls for judgment against Arthur Harrow for conspiracies to release Ammit. He is summoned but the trial doesn’t go as planned by him manipulating the situation. He denies these claims, saying Khonshu is unhinged and his vessel is unwell. It’s impressive how he uses sympathy as a way of manipulation. Yatzil, Avatar of Hather tells Marc to find Senfu’s sarcophagus and it will help him find the tomb.

Marc runs into his ex-wife Layla, who has connections to the black market. She offers her help to find the sarcophagus. She knows a man named Mogart who has what they seek. He is played by the late Gaspard Ulliel. Once they get there they get access. Mogart lets them look under surveillance. Marc switches with Steven because the information is coded. The code is a star chart. Mogart notices the weird behavior and apprehends them.

Harrow shows up, manipulating the situation to his advantage again offering the golden scarab for the clue. He spreads doubt to Layla saying Marc is keeping things from her. Marc turns into Moon Knight to take care of the henchmen with a pretty cool fight scene. It was funny that every time Marc gets too violent for Steven’s taste he switches to Mr. Knight.

They escape with the star chart but come to find that they need to see the constellation on the night the chart was made to get the coordinates. Khonshu says he can turn the night sky but he will be taken after. Khonshu and Mr. Knight turns the sky back, getting the coordinates needed. Khonshu is now imprisoned in stone by the gods.

The visuals in this episode were really good. The gorgeous scenery to the impressive set designs is really well done. Cinematography was neat, especially with all the creative ways they show Marc and Steven talking to each other through reflections.  The costumes continue to be a standout. I am always happy to see Mr. Knight make an appearance even if it was brief. I always like Steven showing up because he’s so likable. Oscar Isaac and Ethan Hawke continue giving outstanding performances.

This episode started off strong but slowed its pace in the middle. You can really feel the lack of Moon Knight in this show. He only ever shows up in the last half of the show and it’s never for long. The fight choreography was good when the fighting was happening at least. I liked learning more about Khonshu.

How the other gods viewed him. That he wasn’t supposed to ever meddle in human affairs. There’s some bad blood between Arthur Harrow and him that is an interesting dynamic. I really liked how Arthur manipulated his way out of the situation he was in as well. He used his smarts to get the other gods to believe that Khonsu’s vessel was crazy. Using their sympathy for Khonshu’s mistreatment of him in the past as a tool to paint the god in an unkind light. I always like it when a villain fights with his brain instead of his brawn.

The end of the episode leaves us with a cliffhanger which I honestly dreaded to see. Khonshu being locked away means we will get even less of Moon Knight. This is disheartening because the show already has such a lack of the titular hero already. I do hope that the next episode won’t be just another slow burn. There are only three episodes left in this series so I really hope they make it count!

Moon Knight is streaming now exclusively on Disney Plus.