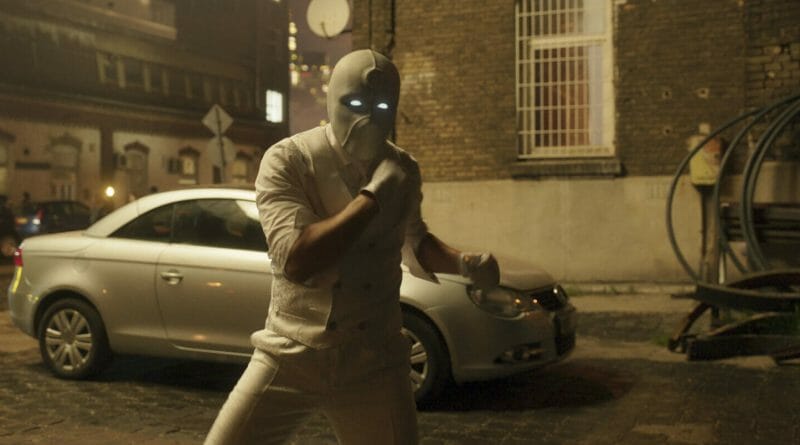 
Can Steven Grant find out about the double life he has been living as Marc Spector?

This week’s episode ‘Moon Knight’ begins with Steven Grant waking up in his bed. He doesn’t remember what happened last night at the museum. However, he now realizes he can communicate with Marc Spector in the mirror but gets no response from him when asking for answers. He goes to work to find out what happened after he let Marc Spector take over. He checks the security cameras to prove what happened last night was real. The problem is they show nothing of him being chased down by the jackal or him turning into Moon Knight. There was damage though and because the security tapes don’t prove his innocence, he gets fired from his job.

He finds storage keys and where Marc has been keeping his things in a storage unit. Marc talks to him explaining that he’s Khonshu’s vessel. Khonshu is the Egyptian God of the moon. Steven thinks Marc is a killer and tells him he’s going to turn himself in so he can’t hurt anybody ever again. More of Arthur’s followers try to capture Steven but he is saved by a woman on a motorcycle. He learns that this is Marc Spector’s wife, Layla.

They get to his apartment where Steven tries to convince her that he is not her husband. He gives her the golden scarab to prove he is not Marc. However, his possession of the scarab further proves her point. Authorities come knocking on his door moments later. Layla hides, while Steven distracts them. They find his duffle bag properly identify him and arrest him.

He discovers the police are not actually police but members of Arthur Harrow’s cult. Khonshu tells Steven to kill Arthur when he comes to greet him. Here Harrow tells Steven that he was Khonshu’s former avatar before him, and how Khonshu punishes those who walked an evil path/done evil, but that he now follows a new god, Ammit. She casts judgment before the evil is done. This is why he wants to resurrect her. He needs the scarab to lead them to her tomb. He wants to eradicate any possibility of evil. Arthur requests to speak to Marc about the scarab’s whereabouts.

As Harrow’s followers close in on Steven threateningly. Layla shows up telling Harrow that she has the scarab, taking off with Steven. Arthur lets out another demon using Ammit’s power to chase after them. Layla manages to hide in an attic with Steven. She begs Steven to give up his body to Marc so he can turn into Moon Knight and get them out of the mess they found themselves in. He doesn’t want to because he doesn’t know if he can get his body back after. The jackal breaks in but only Steven can see it.

He crashes out the window and manages to turn into another Moon Knight alter Mr. Knight; donning a new mask and wearing a dashing white suit. He’s very endearing while fighting the jackal. I really like the use of the expression in the mask’s eyes. Once he realizes he’s over his head, he gives his body to Marc to defeat the jackal. Marc takes it to an unpopulated area, defeating it. Arthur now has the scarab. Steven wants his body back but Marc refuses. He promises that once his deal with Khonshu is finished then he will be gone from Steven’s life for good.

I’m not going to lie, this episode had pacing issues. I think as a weekly release it works but as a binge-watch, I struggled. I really like the character of Moon Knight. In the comics, he has dissociative identity disorder just like in the show, but in the comics, Marc Spector is the host and Steven Grant is an alter. Does it seem like this has changed though? Steven Grant is getting all the character development and is who I want to root for. I still don’t know enough about Marc Spector to like him. However, Oscar Isaac continues with his great performance portraying two very different sides of the same coin.

Ethan Hawke’s Arthur Harrow continues to be quite the interesting villain. Learning more about him and how he used to be a former avatar of Khonshu really makes me want to learn more about him and his past as the “Moon Knight” if we even want to call him that. Despite the minimal highs, the CGI in this episode also continues to be a problem. The small bits of action were entertaining. I was having a real fun time when Steven Grant turned into Mr. Knight. He was so proud of himself that I couldn’t stop smiling.

Marc Spector’s Moon Knight costume still looks really great from a visual standpoint. I like when Marc was talking to Steven through the shattered mirror. That was a beautiful scene. The church also provided great scenery. I do think it takes too long for Moon Knight to appear. I watched 94 minutes of the show and have maybe only seen Moon Knight for fifteen minutes maybe less. Hopefully, the show picks up in the next few episodes.

Overall, this was still an enjoyable episode, just a little slow. We get some questions answered as well as more mysteries to look forward to. I like that I don’t know where this show is going. This keeps me hopeful that this show will end strongly. I’m intrigued about what will happen next.