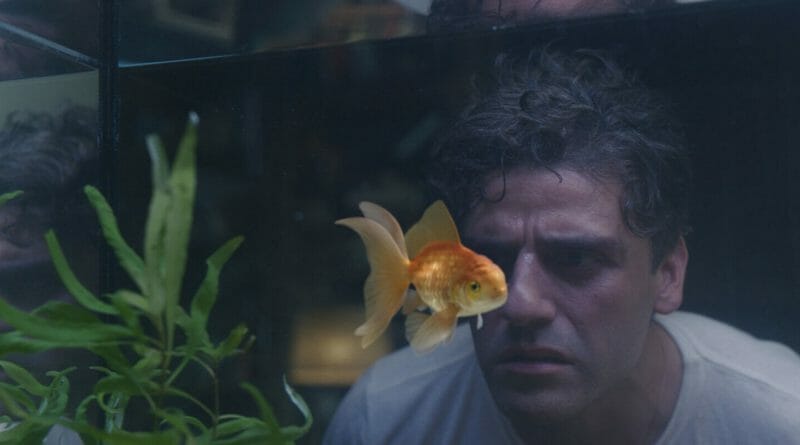 
Moon Knight delivers a solid first episode that leaves a lot of mysteries to unravel. Can Steven Grant figure out what is happening to him when he’s asleep?

The first Marvel Studios Disney Plus series, ‘Moon Knight’, has finally arrived. Launching the official commencement of Phase 4 of the MCU. Before we dive into the craziness that will be the Multiverse of Madness with Doctor Strange 2, we get a sort of origin story for the bright vigilante known as Moon Knight, the avatar of the Egyptian Moon God, Khonshu. The episode starts off with Steven Grant, played by Oscar Isaac, waking up.

We see that he chains his feet to the bed as well as makes precautions to make sure he isn’t acting out in his sleep.  He goes to work at an Egyptian museum feeling off. At work, he also apparently had a date with a coworker at a steakhouse even though he’s vegan. He’s an antisocial person whose only friend is a man who poses as a statue. He goes home and tries to stay awake as long as he can but eventually falls asleep.

He awakes in a field with his jaw broken and mouth bloodied. We hear the voice in his head telling him to run. He follows that advice when he starts to get shot at. Confused, he escapes to a nearby town where we are introduced to Arthur Harrow, played by Ethan Hawke, performing a ritual in front of his cult-like followers. He touches who volunteers and the tattoo on his arm determines who is good and who is bad. If the scale tips in one direction you live.

If it’s in the other you die. Arthur knows that Steven Grant has stolen the golden scarab that he has been searching for. Steven tries to give it to him but physically his body is stopping him. Khonshu, the voice he hears in his head tells him to let a man named Marc use his body. Harrow’s goons attempt to get a hold of Steven in order to get the scarab back, surrounded, Steven passes out and then comes to, only to see his attackers beaten, bloodied, and most likely dead around him.

He steals a van to run away, initiating a car chase sequence. He keeps killing people in spurts and is only aware of himself from moment to moment. After Marc in Steven’s body gets rid of the cars chasing them, Steven wakes up in his bed. He thinks it was all a dream until he sees his fish that used to only have one fin, now has two, He goes to a pet shop, realizing his fish was replaced by him. He goes to his date but realizes he’s two days late.

Nothing is making sense to him. Arthur Harrow shows up at Steven’s job for the scarab. He grabs Steve’s arm so Ammut, whose power he uses to become savior and executioner can judge Steven. The scale on Arthur’s arm keeps switching left and right undecided of Steven’s nature and he lets Steven run away.

After the museum has closed, Steven keeps hearing strange sounds. Thinking someone has left their pet in the museum, Steven goes out to check out the area. Only to run into an Egyptian creature who is trying to kill him. He locks himself in the bathroom with the creature trying to break through the door. In the mirror, he sees his reflection, a man who calls himself Marc Spector. Marc tries to convince Steven to let him take control. If he doesn’t he will die. After much back and forth, Steven finally agrees to let Marc Spector take over thus giving us our first appearance of Moon Knight in action.

The editing in this episode is top-notch. You get that sense of unease because it cuts from one scene to the next to show Steven’s lack of time. There wasn’t as much action in this episode as him being Moon Knight but it’s only the first episode so I can’t judge it too harshly for introducing its characters first. CGI was believable except for the monster in the end. It just looked a little off. Didn’t quite sell me that it was actually there. Oscar Isaac did though, his superb acting saved it.

For the first episode, I think this was pretty solid. Oscar Isaac is acting his butt off playing these two characters. He makes Steven a really sympathetic protagonist. You just want to see this man get a break but things just keep going wrong for him. He’s a good character to root for. I don’t know much about his split personality yet to have an opinion on him. I hope we learn more about Marc Spector soon. Ethan Hawke also does a really stellar job playing the villain. I’m very interested in seeing him be an antagonist to Moon Knight throughout this series.

The head writer is Jeremy Slater, does a great job in this first episode. You really feel the sense of disjointedness that Steven is going through. You’re with Steven as he figures out what is happening to him. The mystery of it all is engaging. Mohamed Diab is the lead director. He makes some really interesting shots.

I like him using mirrors as a way for Steven’s other personality to talk to him. The transformation to Moon Knight was super cool to see. It was like the comic book leaped off the pages to the screen. The glowing eyes were a nice touch. Overall, I had a good time with the first episode. I think it has a good setup and sets the stage for an interesting show. I will definitely be checking out the next episode!