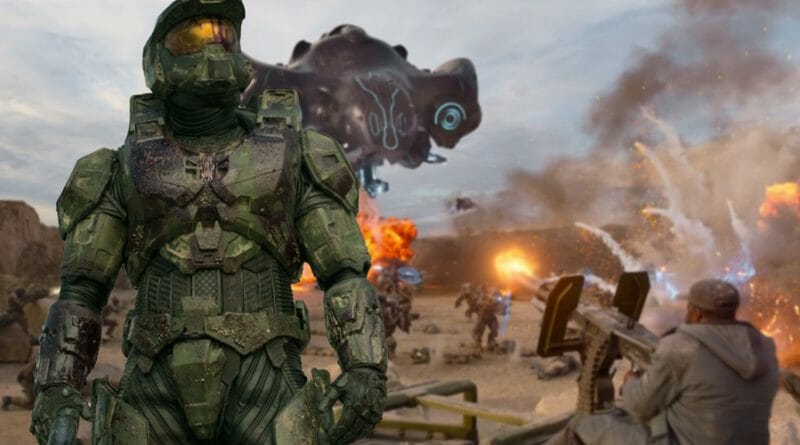 
All Action and No Bark, Halo Delivers Its Best Episode Yet

After focusing heavily on world-building, lore, and Master Chief’s backstory, Halo has finally set that aside for a brief moment and delivered the action we have so desperately needed since the series premiered. This week’s episode of ‘Halo’ titled Reckoning finally sees the full force of The Covenant facing off against the Master Chief, his Silver Team, and the rest of the UNSC.

We spend some time further exploring the second keystone that was found during the closing moments of ‘Halo Episode 4’, giving Master Chief even more reason to further question Dr. Halsey’s intentions with him, but now also has him questioning Captain Keyes. Despite trying his best to deviate from answering any direct questions, Captain Keyes promises Master Chief to look into Dr. Halsey personally. Given how this episode began, which saw Dr. Halsey and Captain Keyes scouting for children on Eridanus-2, we know he’s hiding more than just Dr. Halsey’s secrets.

This is something that also boils over almost immediately and begins to further affect his relationship with his daughter, Miranda as she is taken off the current mission on Eridanus. Despite his best efforts to support his daughter, Captain Keyes has now found himself between a rock and hard place as the secrecy he and Dr. Halsey have in regards to John-117 (Master Chief), and the Spartan program has taken higher importance over his daughter.

Master Chief has also now learned that Kai-125 has also removed her pellet. As if the gun grease in her hair and her bubbly smile were enough of a sign that something was off with her. After confronting Kai-125 about this matter, Master Chief pulls her off the current mission as he feels that she isn’t ready for battle now that her pellet has been removed.

Albeit a bit contradictory given that Master Chief himself is on the very same boat. While it was nice seeing Kai-125 make a point of this, having Cortana chime and say that she was proud that Kai-125 was standing up for herself, takes away from the moment. It was just a line that wasn’t needed.

I feel like having Master Chief sit there for a few seconds longer to let that fact sit would’ve done a lot more for Kai than Cortana quickly chiming in to support her. This moment entices Master Chief to want to learn more about the Spartan Program and more about his childhood so he sets off to touch the second keystone to gain more answers, this time revealing more than he has been able to learn from the first artifact which was found on Madrigal.

After learning that he was kidnapped from Eridanus-2 as a child and turned into a Spartan, Master Chief goes to attack Dr. Halsey but fails due to Cortana shutting him down. After Chief comes to, the UNSC is attacked by The Covenant who were able to find their location due to Master Chief touching the keystone. Here is where we truly see the show dive into its Halo roots.

I know the creators said they never looked at the games in order to create this series but I gotta call BS on that. There is no way you create such an epic and massive action sequence like this one, and implement everything Halo fans loved about the game’s combat and combat system.

That’s just me, the creators of the series can live their truth. One thing is not looking at the source material for the story but there is no way you don’t look at the source material and do something this epic, then again I could be wrong, but I stand still remains. What made this action sequence shine was seeing Master Chief and the Silver Team kick Covenant ass nonstop. But also Master Chief’s brutality, again this is all due to him now being able to feel the full scope of emotions that occur during battle.

The same happens with Kai-125 who is overwhelmed with the reality of battle and is unable to do anything physically to the point where she is severely injured and needs to be saved by Master Chief and the Silver Team. Not only does this prove Chief’s initial reasoning for wanting to sideline her, but also proves Cortana’s point as well. This moment specifically is what made everything we’ve had to sit through in the past three episodes worthwhile.

You care about moments like these and how the removal of these emotions suppressing pellets affects a Spartan who’s essentially had their third eye opened, metaphorically speaking, of course. This also adds more weight to Soren’s dialogue back in episode two and how the removal of that pellet will allow you to see things for what they truly are and we got a more serious look at that in real-time through the lens of Kai and Master Chief.

The episode climaxes with The Covenant successfully retrieving the keystone and with Master Chief meeting Makee face to face. This encounter can have severe implications for the UNSC as Makee is already a viable threat to them all and potentially a deadlier threat to Master Chief, possibly serving as someone who can sway him away form from the UNSC given all that’s come to light over the course of the past few episodes.

I’m sure everyone who’s reading this has noticed that I haven’t mentioned anything about Kwan Ha and that’s for good reason. She didn’t get much attention this episode despite spending a good chunk of last week’s episode with her and Soren on Madrigal. However, I’m still having a hard time connecting and engaging with Kwan Ha and her freedom fighter storyline. There’s nothing interesting about it in the slightest and that’s probably another key factor in why this week’s episode was so good.

The series has four episodes left and they really need to continue delivering what they delivered this week and with the first couple of episodes of the series. Kwan Ha needs some revitalizing as the remainder of the season plays out because she more often than not comes off as whiny and needy; sadly that’s how she’s been written and there’s no hiding it.

All that aside, this week Halo delivered one of its strongest episodes yet and made the previous expositionary episodes worth sitting through as we get to see these plot threads finally unravel. I still think this is one of the better live-action video game adaptations and I hope Halo finishes strong and uses this momentum heading into season two. The success of Sonic the Hedgehog 1 and 2, weirdly enough, Uncharted, and hopefully with The Last of Us, live-action video game adaptations could finally be a mainstay in mainstream media. Amazon I’m rooting for you when it comes to Mass Effect, don’t fail us.

‘Halo’ is streaming now on Paramount+