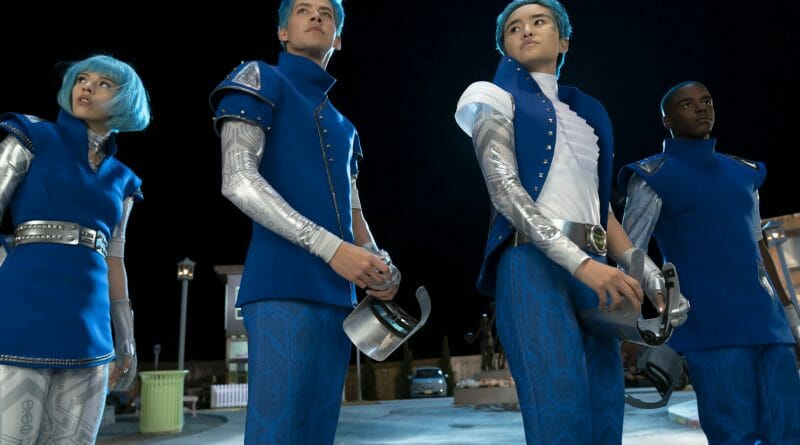 
June is nearly wrapping and the content released on Disney Plus has been nothing short of spectacular. Between the series finale of Obi-Wan Kenobi, Episode 3 of Ms. Marvel, and the upcoming streaming release of Doctor Strange in the Multiverse of Madness all happening within the same week, Disney is closing out the month of June on a really strong note. Now we look ahead to the upcoming release in the month of July. From the season finale of Ms. Marvel, the release of Zombies 3, and the third season of High School Musical: The Musical: The Series, fans have a lot to look forward to, check out the full release schedule below.

– Marvel Studios Assembled: The Making of Doctor Strange in the Multiverse of Madness

Join visionary director Sam Raimi and the cast of the film as they recount their experiences bringing Marvel’s darkest story to life. From world-building to universe-building, hear first-hand accounts from the cast and crew on what it took to design, create and make each universe unique and believable. Discover all this and more in Assembled: The Making of Doctor Strange In The Multiverse of Madness.

From the award-winning producers of “Planet Earth,” “Frozen Planet” and the “Disneynature” films, “America the Beautiful,” narrated by Michael B. Jordan, is the jaw-dropping story of our homeland and its amazing animals. North America is the most diverse and extreme continent on Earth. The only place where you can find every landscape, from Arctic icecaps to baking deserts and everything in-between. We take a journey through America’s most spectacular regions — the mountainous Northwest, the steamy South, the arid West, and the endless Heartland.

Whatever the neighborhood, there’s a hero who can make it a home. Smart, tough, brave, you name it, the animals of North America have what it takes to overcome the elements and thrive. In our closing episode, we meet the human heroes fighting to preserve our wildlife and wild places for future generations. Some flashing lights sequences or patterns may affect photosensitive viewers.

Marvel Studios’ “Ms. Marvel” is a new, original series that introduces Kamala Khan, a Muslim American teenager growing up in Jersey City. An avid gamer and a voracious fan-fiction scribe, Kamala is a Super Hero megafan with an oversized imagination—particularly when it comes to Captain Marvel. Yet Kamala feels like she doesn’t fit in at school and sometimes even at home—that is until she gets superpowers like the heroes she’s always looked up to. Life gets better with superpowers, right?

The Wonderful Summer of Mickey Mouse – Premiere
Mickey Mouse and his friends each recall the wild events leading up to the Annual Summer Fireworks Spectacular from their point of view.

Ms. Marvel – Finale – Episode 6
Marvel Studios’ “Ms. Marvel” is a new, original series that introduces Kamala Khan, a Muslim American teenager growing up in Jersey City. An avid gamer and a voracious fan-fiction scribe, Kamala is a Super Hero megafan with an oversized imagination—particularly when it comes to Captain Marvel. Yet Kamala feels like she doesn’t fit in at school and sometimes even at home—that is until she gets superpowers like the heroes she’s always looked up to. Life gets better with superpowers, right?

Zombies 3 – Premiere
It’s Zed and Addison’s final year at Seabrook and things are better than ever. The town has finally accepted monsters as a part of Seabrook and has become a safe haven for monsters and humans alike. Zed is on the cusp of receiving a football scholarship and becoming the first Zombie to ever attend college (and he’s excited to join Addison who has already been admitted). Addison is excited to mark the opening of the town’s brand new “cheer pavilion” by inviting cheer teams from all over the world to compete in an “international cheer-off.”

However, the town is shocked by the arrival of a new group of intergalactic outsiders – Aliens, who show up to compete in the cheer-off. Though they begrudgingly allow the Aliens to stay for the competition – the monsters and humans of Seabrook grow suspicious when they discover that the Aliens may be looking for more than a friendly competition. Some flashing lights sequences or patterns may affect photosensitive viewers.

Siempre Fui Yo – Premiere – All Episodes Streaming
Siempre Fui Yo (It Was Always Me) follows the adventures of Lupe (Sevilla), a Mexican girl whose life takes an unexpected turn when she finds out her father – El Faraón, Colombia’s greatest music star – has died, and decides to leave her native Mexico and travel to Cartagena to attend his funeral.

Once there, she quickly realizes that nothing is what it seems and decides to enroll in a musical contest to be close to her father’s entourage and look into his suspicious death. Together with Noah (Bueno), a young former assistant of her father’s, Lupe embarks on a mission full of danger, romance, and plenty of music to solve this mystery in the heart of the Colombian Caribbean.

Tudo Igual… Só Que Não – Premiere – All Episodes Streaming
Disney Tudo Igual, Só Que Não follows Carol (Gabriella Saraivah) at the time she is experiencing important changes in her life. On the one hand, she has to deal with her mother marrying her new boyfriend and the prospect of living under the same roof with his son.

On the other, she starts dating someone for the first time in her life and begins to face unexpected situations with her lifelong girlfriends, which threatens their relationship. So she faces the typical challenges of adolescence, experiencing feelings she’d never explored before and learning that getting to know herself and respecting her emotions are the first steps toward happiness, even if she makes mistakes along the way.

High School Musical: The Musical: The Series – Season 3 Premiere – Episode 301 “Happy Campers”
After a momentous year at East High, the Wildcats head to Camp Shallow Lake for two weeks of fun in the sun. With a high-stakes production of “Frozen” looming and new campers threatening to shake up the Wildcats’ dynamic, the campers are in for an unforgettable summer of highs, lows, and “Let It Go’s.”

Light & Magic – Premiere – All Episodes Streaming
Granted unparalleled access, Academy Award®-nominated filmmaker Lawrence Kasdan takes viewers on an adventure behind the curtains of Industrial Light & Magic, the special visual effects, animation, and virtual production division of Lucasfilm. Learn what inspired some of the most legendary filmmakers in Hollywood history, and follow their stories from their earliest personal films to bringing George Lucas’ vision to life.

All these titles and more will be streaming exclusively on Disney Plus.