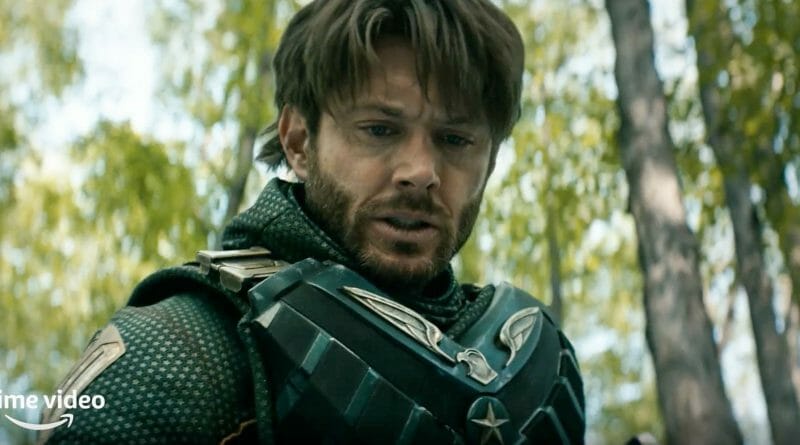 
Now that The Boys set him free from his Russian cell, Soldier Boy returns home to a very different place than he left

Addiction, corporate espionage, and mistrust have surrounded The Boys in this spectacular episode. We’re seeing the small glimpse of hope fade from the team after seeing the presumed dead Soldier Boy (SB) played by Jensen Ackles emerge from a cryo cell in Russia and nearly killing Kimiko in the process. The Supe Killer weapon seems to have been an overstatement. And now with Homelander removing the small restraint Stan Edgar held over him at Vought, the group and especially Starlight are looking for anything to give them an edge.

Tensions have flared for The Boys; Mother’s Milk (M.M.) and Frenchie learning not only that Butcher has taken Temp-V but also Hughie, It’s a whole new low for them to see the extent that Butcher is willing to go to fulfill his mission. But with Kimiko’s injury caused by Soldier Boy not healing they rush back to the states to save her. At this point, the team is divided Hughie and Butcher on one end while the others try and process everything going on. M.M is completely distraught knowing the man that killed his family is on the loose once more and there’s little he can do about it.

After the world learns of Supersonic’s death by “overdose” Starlight is now in a constant state of fear for herself and her loved ones, and against her better judgment goes to see Hughie. In hopes that their mission in Russia brought them the saving grace they needed. But Hughie on the other hand is feeling himself, to say the least. Telling Starlight about the Temp-V and how strong he felt showed a side of him that she had never seen.

This goes without saying Hughie is used to being the weak one, and this taste of power has already boosted his confidence to a point where he even opened the jelly jar that he struggled to open since episode one. It is these subtle notes that show the boost in mentality. But we can already tell that he craves more of that feeling which we see later on in the show.

Later Maeve visits Butcher already knowing there’s no weapon and Soldier Boy is alive while providing him with more Temp-V. Their talk of business is cut short while the two break their sobriety to sulk in the recent loss. As they open up on the philosophy that no one should be all-powerful and Butcher fully condemns them all to death the two then become “entangled”.

It’s heartbreaking to see them crack so quickly but this episode shows how difficult addiction is to beat. Not to say that their fling was unnecessary we see the vulnerability of the duo. Maeve for all intents and purposes needs to redeem herself and is ready to put her life on the line to stop Homelander just the same as Butcher but in his case, it’s still some old-fashioned revenge.

Mind you this was all in the first 15 minutes of the episode so much has happened in this episode! Homelander has now set pieces in motion on his takeover in Vought. Ashley is CEO or at least just a figurehead for Homelander to control. The Deep is now head of the crime analytics department to help weed out non-team players. After betraying Supersonic, A-Train is caught off-guard by his meeting with Blue Hawk and has to figure out how to handle that situation.

While at the hospital we are now seeing the repercussions of Russia’s mission unfold with Frenchie now being threatened once more by Nina; But the biggest reveal was Kimiko’s absent powers. It seems that the blast from Soldier Boy is what the team was looking for after all.

Speaking of Soldier Boy, he has returned to the good ol’U.S. of A to discover he’s been away for a long time. I really enjoyed this scene. Jensen Ackles delivers with just his mere reactions to the world around him. Besides noticing the surge in technology you have to remember he was last among the masses at a time of inequality and prejudice so seeing the new openness of sexual orientation and acceptance of diverse cultures he’s totally confounded.

Things take a turn for him when he starts to hear Russian music. This triggers an emotional response that caused him to nuke blast a local restaurant. This guy has PTSD fully on display and who wouldn’t when you were a lab rat for 30+ years. But to see that this new power is not under his control can spell lots of disaster moving into the series.

With the recent news of Soldier Boy’s recent destruction of the restaurant, the team figures out a way to track him or at least know when he’s around with a radiation detector. But are keeping their findings secret from a very concerned Starlight who is being tasked with finding the “new” super. But then were sent back to Trenton where Blue Hawk creates a new disaster by injuring locals at an apology reading, and with his quick temper, he also hurt A-Train’s brother to the point of full paralysis. This is where I hope we can see A-Train turn a new leaf it’s definitely a bit too late but I think we can see some redemption moments from him.

We get to meet “The Legend” played by Paul Reiser, who wonderfully plays this Tony Stark-est character. He was the VP of Hero Management at Vought before Stillwell and that entailed him fabricating cover-ups when the heroes messed something up bad; just like the killing of M.M’s family. Learning that Soldier Boy wanted the location of ex-girlfriend Crimson Countess The Boys now have a chance to get the drop on him.

There’s still plenty to unpack here for this episode but I’m going to shorthand for you real quick. Homelander is still cleaning house with now the recent abduction of Queen Maeve who we don’t even know if she is still alive. After a moment where Kimiko is able to speak a few words. Frenchie is also abducted by Nina for failing to follow her orders and go kill a family for her. But not before a heartfelt musical moment from Kimiko and the hospital staff. She lost her voice after being injected with Compound V in season 1.

Fast forward and we get a hilarious cameo in a private room of Crimson Countess from none other than SirCumsALot779 executive producer Seth Rogen having their own late-night fun! Instead were interrupted by the Countess being restrained by the team while they wait for the arrival of Soldier Boy. This is when our plot thickens, Crimson Countess knows he’s alive! While SB believed that it was the Russians who paid her off to help capture him she says it wasn’t them, which leads us to believe it was Vought themselves.

And to add another turn of events while Hughie is being distracted by Starlight, M.M is roofied by Butcher so he could enact a new plan. He gives the Countess to SB on a silver platter and they, in turn, work together to kill Homelander. I think the most shocking thing about this scene was that Hughie was in on it, his whole mindset changes while he’s on Temp-V and it shows. Not long before we would hear him being the voice of reason and would probably never go for this kind of plan. But now they have their weapon.

Episode 5 has hands down brought the season to a whole new level. Was I surprised that Butcher did what he did… not at all honestly? But it was how quickly it happened and the cooperation with Hughie that shocked me. The cast and crew are doing an incredible job this season. Keeping the story flowing and adding so many new layers of suspense to the story. Adding Soldier Boy to the group is going to bring so much drama to the team and I must say loving the beard on Ackles haha. The many side plots in this episode make me so excited for next week.

‘The Boys’ Season 3 is streaming now on Prime Video.