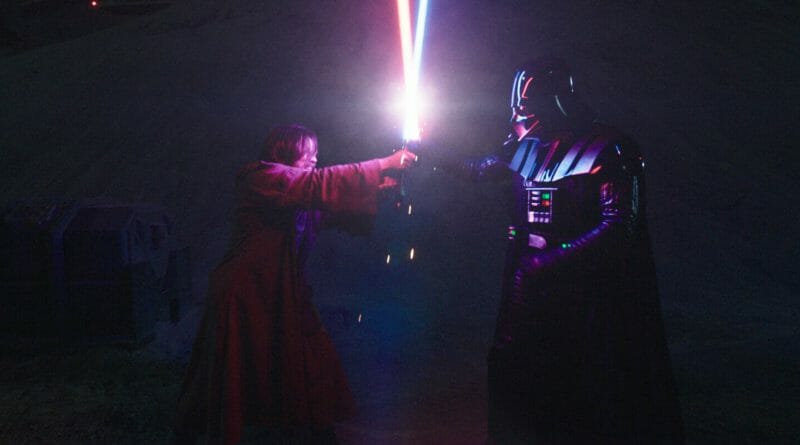 
Vader, Vader, Vader. Now I can see why he’s feared the galaxy over. If I saw a 6’2″ cyborg dressed in all black with a red lightsaber walking toward me I would be scared, too. Seeing him spar with Obi-Wan Kenobi was a bit heartbreaking but also cool. Also, Zach Braff as Freck; need I say more? Part 3 of Obi-Wan Kenobi opens up with Ben Kenobi and Princess Leia on the cargo ship from the end of episode two.

Obi-Wan attempts to commune with his former master Qui-Gon Jinn seeking guidance during his troubling times. Elsewhere, Darth Vader is seen emerging from a bacta tank and having his suit assembled onto him by droids, a scene heavily reminiscent of Star Wars: Episode 3: Revenge of the Sith. Once on the planet, our two misfits hitch a ride with a star-nosed repulsor truck driver making his way across the desert. Things go smoothly until some Stormtroopers join the gang and ask the pair various questions.

Thankfully Obi-Wan and Leia are quick on their feet and make up a few believable white lies until Obi-Wan slips up; however, Obi-Wan manages to get them out of that sticky situation. After a small run-in with some guards at a checkpoint, it looks like our heroes are done for. An Imperial officer volunteers to handle the situation herself, but instead shoots the troopers and leads Obi-Wan and Leia to a safe house. It turns out that she’s been smuggling out Jedi for years in an underground railroad situation.

Meanwhile, Reva receives a message that a group of Stormtroopers has spotted Obi-Wan on Mapuzo (the planet that Obi-Wan and Leia are currently stranded on). Being the loyal Inquisitor that she is Reva begins to alert Darth Vader, but discovers that the Fifth Brother has already done so. A few harsh words are exchanged and Reva leaves for Mapuzo. Back on the planet, Obi-Wan senses the presence of his former Padawan and sends Tia and Leia on their way to safety. Darth Vader dramatically makes his way through the town killing almost every citizen in his way. Catching on to Darth Vader’s tactic, Obi-Wan runs to a remote area.

After a decade has passed since the Jedi and former apprentice have laid eyes on each other Obi-Wan and Darth Vader stare down one another with tension that could cut Bantha butter. “What have you become”, Kenobi asks Vader with evident sadness in his voice. “I am what you made me,” Vader replies. The two men exchange blows via lightsabers and Star Wars fans both grinned with glee and frowned with sadness.

Obi-Wan is clearly rusty with his laser sword skills, thus Vader dominates the battle. The Sith Lord slashes open a barrel of liquid, then lights the ground aflame. Obviously still grumpy about their last meet-up, Darth Vader force pulls Obi-Wan through the fire, leaving him there to burn as Obi-Wan once did to him. Tia’s droid pulls Obi-Wan to safety as Darth Vader looks on in rage.

In the tunnel, Tia and Leia hear the skirmish, so the young princess instructs Tala to go save Kenobi and assures her that she’ll be ok. Tia informs Leia to stay to the right and that there will be someone waiting at the end to meet her. Reva somehow finds the safehouse and discovers the tunnel. Once at the end of her route Leia encounters Reva who assures her that everything will be ok.

This week’s episode hit me in the feels. Seeing Obi-Wan and Darth Vader engage in a lightsaber battle and Vader burning Obi-Wan brought back those painful memories from the end of Revenge of the Sith. Yes, their little fight was terrific, but ouch, my heart. On another note, each episode reminds me time and time again of the amazing chemistry between Ewan McGregor and Vivien Blair (Princess Leia).

It’s funny how their characters both love each other, but also don’t really like being around each other. Alongside Zach Braff as Freck, Indira Varma (of Game of Thrones fame) was great as the double agent Tia who shows that there still is hope left in the galaxy. Finally, a cool, tiny easter egg caught my attention: Quinlan Vos. Little mentions like that make Star Wars fans like me smile; hopefully, we’ll eventually get to see him in live-action.

Obi-Wan Kenobi is streaming now on Disney Plus!