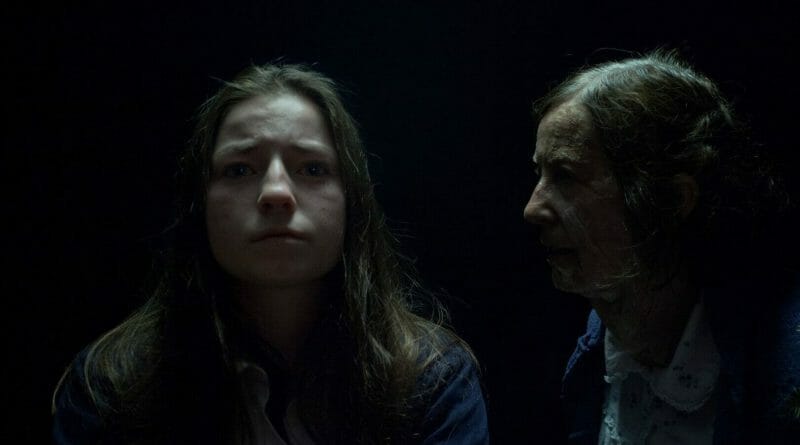 ‘You Are Not My Mother’ Review: Frightening and Poignant, Kate Dolan’s Feature is Quite the Debut


Though unfocused in some areas, ‘You Are Not My Mother’ carries itself as a compelling indie horror all the way through

The significance of the “Free Brittany” movement isn’t only inside the fact a beloved pop icon has no control over her career or legacy. It goes deep into a historical habit of invalidating women’s mental health. Quick history lesson before I get into this review: In the 19th century, a diagnosis called “Women’s Hysteria” became increasingly prevalent. If a woman was displaying symptoms of mood changes, anxiety, irritability, etc. the local physician or doctor would diagnose them as ‘hysterical’. The “cure” to “hysteria” is as close to a horror premise as a medical practice can get; insane asylum admissions, solitary confinement, hysterectomies (without consent), and lobotomies.

Women who were dealing with abuse trauma or serious mental illnesses translated to insanity for the male figures in their lives. Brittany Spears hasn’t been forcefully lobotomized but through her mental instability, she was placed under a conservatorship where she had no control over every aspect of her career and in most aspects, her own life. Thankfully, We’ve come a long way from those dark days of take-cocaine-to-heal-your-common-cold medical practices. But cases like Brittany’s are keeping the spirit of women’s hysteria alive; invalidating mental health and opting for complete control over the person.

Spears doesn’t make a cameo in this film, so you are probably wondering how the pop icon relates to writer-director Kate Dolan’s feature film debut. Its themes and ideas are impressively woven into an intriguing horror plot that not only harmonizes with clear-cut ideas but elevates them. We meet Char and her mother Angela who have obvious disconnects within their lives. They both live with Angela’s mother who seems to have taken the role of Angela’s caretaker.

Angela’s issues are made evident through her habit of remaining in bed for most of the day and her cold relationship with Char, who has fond early memories of the two of them. The family’s relationship issues are palpable. Almost reminiscent of what Ari Aster did with ‘Hereditary’, a completely atmospheric depiction of generational trauma. Dolan’s focus on energy and subtle chemistry disconnects within a family refusing to communicate was absolutely masterful.

The film wastes no time in telling its story; one day, Angela disappears sending the family into a panic. When she returns, she is noticeably different; in practical ways and in proper horror movie ways. Angela’s mother treats the obvious change in moods and demeanors as if they were routine. Countless medications and under direct control, Angela’s behavior is heavily monitored by her mother. See the parallels?

Char is a compelling enough protagonist to take us through its constantly unraveling plot, but it causes the film to enter into territories that aren’t as riveting. Filled to the brim with eerie sequences and enthralling horror imagery, we navigate every piece of exposition through Char. Which was a brilliant narrative choice to depict family trauma. I think we can all agree that becoming an adult is realizing your whole family is mentally ill, a notion that Char realizes in real-time.

Kate Dolan’s ability to depict trauma is not only realistic but incredibly beguiling. None of it feels mushed together. Every narrative choice and the prevalent theme works to elevate its horror elements. Its scares tend to be shallow at times but it’s still commanding imagery. It leaves nothing subtle, and to be honest, it’s a refreshing choice.

When it became clear how ‘You Are Not My Mother’ was going to end, it definitely stung. But this debut has much to boast about. Dolan’s work feels fresh and absolutely confident. Writing and directing achievements that truly blew me away. On top of those, you have these amazingly realized central performances that flaunt the nuance of trauma and mental health as well as the intense fear you’d expect from a horror.

When it became clear how the film was going to end, it stung. The usual conventionality trap but after a meticulously paced and rewarding unraveling, the ending hardly feels like a demerit. I look forward to what Kate Dolan will follow up with.

‘You Are Not My Mother’ is available to stream on all digital platforms.