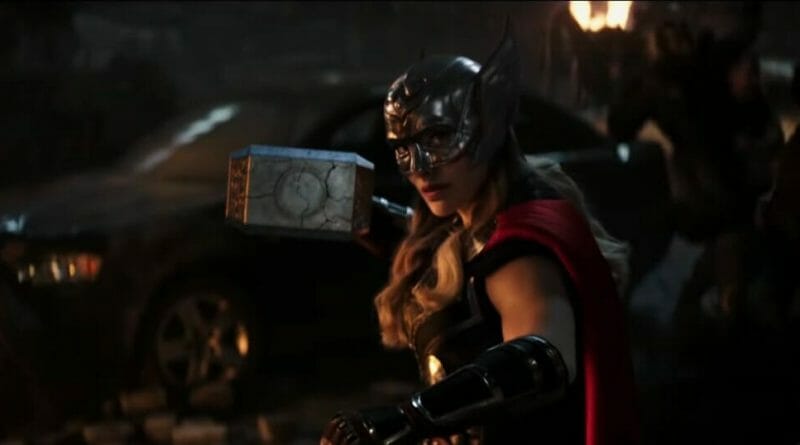 The trailer starts with a quick transition showing different phases of Thor over the centuries. He says that he is now tired of fighting, the only thing he wants now is peace. As he mentioned in ‘Avengers Infinity War’, he mentions that “I need to figure out exactly who I am.” which was the reason he left Earth and went with the Guardians of the Galaxy. We see a quick glimpse of Fat Thor who is working out while wearing a cap where “The Strongest Avenger” is written. This is a callback from a scene in ‘Thor Ragnarok’ where he tries to unlock a Quinjet by referring to himself as the strongest Avenger.

In the next scene, we see The Milano leaving the planet which looks exactly like Sakaar but Thor is not with them, which means Guardians and Thor parted their ways on Sakaar when Korg showed up who is also with Thor in that scene. Also, Mantis has some device on her head which may be used to enhance her psychic ability.

After that, we get to see the first live-action appearance of Toothgnasher and Toothgrinder, they are the goats of Thor who first appeared in Thor Annual #5 (August 1976). They are the mystical goats of Thor that pull his chariot in comics when he became unworthy, here we can see them pulling a boat with King Valkyrie and Korg in it.

In a scene where we can see a pirate ship where a woman with blue hair approaches and kisses Thor. The character is still unknown but it’s played by Gabriella Wisdom. There is also a dead octopus behind him in the next boat.  Now, this could be from a different planet or it’s going inside Thor’s mind.

Next up, we see The Goat Boat arriving on Olympus. Stormbreaker can be seen powering the boat, we got to know in Avengers Infinity War that Stormbreaker can easily summon Bifrost now because of this the boat can travel to every realm easily.

There is some sort of celebration in the fort of the Greek Gods, in the next scene we get our first look at Russell Crowe as Zeus holding a lightning bolt in his hand. Our theory here is that Hercules may not be present here and Gorr the God Butcher shows up when Thor leaves this place, he kills all the Gods present here. That is how they can plan to give Hercules his own show/movie in the future.

Then there is a comic accurate scene, where we can see Falligar The Behemoth. He’s an alien god who is killed by Gorr the God Butcher, Thor is shocked to see someone dead who used to fight Black Holes for fun. In the next scene, we see New Asgard, it has evolved quite a lot after the events of ‘Avengers Endgame’, King Valkyrie is also here in a meeting. She is getting bored with this job, and it’s because Valkyries are elite warriors who’ve fought powerful beings like Hela. Meik can also be seen here who has a new look.

In the background, we can hear Peter Quill talking to Thor before leaving him on Sakaar. He says, “You ever feel lost? Just look into the eyes of the people that you love” while looking into the eyes of his team. This clearly shows his affection towards Guardians. While Peter was looking at his team Thor was looking at him funnily, also this scene will take place in Sakaar where Thor and the Guardians will split up.

And then finally, the first live-action look at Mighty Thor. Just like in the comics, she will be diagnosed with cancer. She may have come to Asgard seeking help from Thor, she’s holding the same Mjölnir that was broken by Hela in Thor Ragnarok. This scene is from New Asgard because there is a car behind Mighty Thor, it’s being attacked by someone who is a big black creature, they could be the Black Berserkers who were created with Necrosword by Gorr the God Butcher in comics.

The film finds Thor (Chris Hemsworth) on a journey unlike anything he’s ever faced – a quest for inner peace. But his retirement is interrupted by a galactic killer known as Gorr the God Butcher (Christian Bale), who seeks the extinction of the gods. To combat the threat, Thor enlists the help of King Valkyrie (Tessa Thompson), Korg (Taika Waititi) and ex-girlfriend Jane Foster (Natalie Portman), who – to Thor’s surprise – inexplicably wields his magical hammer, Mjolnir, as the Mighty Thor.

Together, they embark upon a harrowing cosmic adventure to uncover the mystery of the God Butcher’s vengeance and stop him before it’s too late. Directed by Waititi (“Thor: Ragnarok,” “Jojo Rabbit”) and produced by Kevin Feige and Brad Winderbaum, “Thor: Love and Thunder” opens in theaters July 8, 2022.”