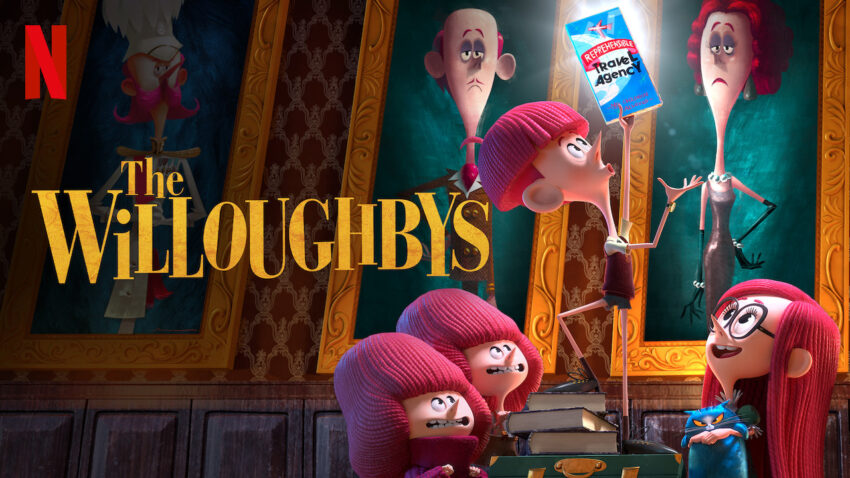 Families can be complicated, but in this case, some are more whimsical than others. Meet the Willoughbys

“The Willoughbys,” which premiered on Netflix on April 22, is an example of how eccentric some families can be. Based on the Lois Lowry book of the same name and produced by Bron Animation, the film’s poster bills itself with the tagline, “A family story for anyone who ever wanted to get away from their family.” Needless to say, the movie fulfills its claim; although the story may have a predictable ending, its runtime is filled with memorable moments and enough unique moments to make it stand out as one of the better movies of 2020 so far.

The film focuses on the Willoughby children: Tim (Will Forte), Jane (Alessia Cara), and twins Barnaby A and Barnaby B (Séan Cullen). All four kids come from a family of adventurers and have personalities that set them apart from everyday people. However, their parents, Mr. and Mrs. Willoughby, are too romantically involved with each other to care for their children, leading to them being neglected and begging for scraps. The children eventually get sick of their parents and decide to orphan themselves by setting up a deadly road trip for their parents to go on. Yet when their parents hire a nanny (Maya Rudolph) to care for them, the Willoughbys start a journey to figure out what it truly means to be part of a family.

One of the most obvious points of praise for “The Willoughbys” is its animation. In an age where animation is becoming varied in terms of artistic style, “Willoughbys” has a hand-crafted aesthetic laced within it. The characters’ hair, settings like the Willoughby house, and various set pieces feel as if they were made with care; one could compare the movie to the video game “LittleBigPlanet” in terms of how everything looks. It manages to set itself from other animated movies of the past, making a style that will be unique to it for the foreseeable future.

The voice cast is also just as praise-worthy, with every member of the main and supporting cast feeling memorable and comedic. Alessia Cara, who makes her film debut with this movie, does a stellar job of making Jane the foil to her brothers; where Tim is the straight man and the most mature of the children, Jane is eccentric, a huge dreamer, and a girl with a huge love for music. Maya Rudolph also does exceptionally well as the Nanny, making her character as warm and kind-hearted as possible, on top of being a large proponent of the film’s jokes.

When it comes to the jokes, all of them are well-done and memorable. Both those laced within the film’s dialogue and those that focus on visual gags will have viewers rolling with laughter, with a decent amount of jokes being original and fresh with how they are executed. The film has a script that does not feel dated and manages to appeal to kids and adults alike. Even if the ending does feel conventional, the film has enough heart to make it feel memorable and heart-warming without beating its message over audiences’ heads.

Finally, the film has an obvious message about family and what constitutes it. To help get this across, the movie shows a large variety of families, from a biracial couple and their kids, to a gay couple, to a single mother and her kids, all without bringing too much attention to them. In doing this,
“Willoughbys” manages to show how no one family needs to look the same, with their methods feeling natural and subtle enough to be worth praising. Not only that, but the message of how love is essential to any family is a great message for people of all ages to learn, as it can help anyone trying to figure out their family life realize what the most important aspect of it must be.

“The Willoughbys” is a film that is essential viewing for those who are currently stuck inside with their families. The animation is beautiful and unique, the cast is top-notch, the writing is mostly top-notch, and it weaves its themes throughout the movie without being unsubtle. Through all of its hijinks and mishaps, “The Willoughbys” manages to deliver a great product that shows how valuable family is, no matter what kind of family it may be.

"The Willoughbys," although conventional at times, stands out as one of Netflix's better outings in animation and one of the best animated films of 2020 so far.

Aaron AcevedoApril 27, 2020"The Willoughbys," although conventional at times, stands out as one of Netflix's better outings in animation and one of the best animated films of 2020 so far.8.0110
Your RatingUser Rating: 0 ( 0 Votes )
Share

THE MIDNIGHT GOSPEL S1: Preaching Out of World Messages Next post