Home Movies Extraction is a high-octane action thriller. Nothing more, nothing less.
MoviesReviews

Extraction is a high-octane action thriller. Nothing more, nothing less. 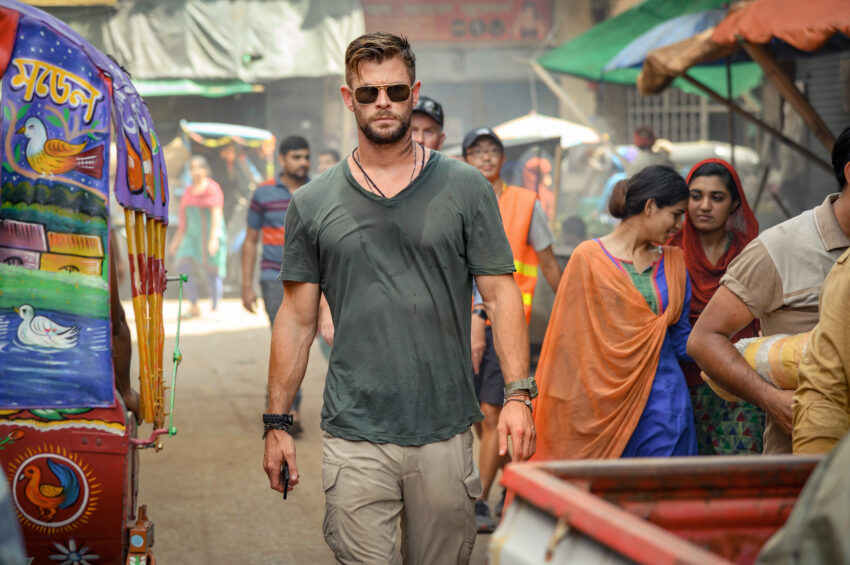 Netflix’s latest original film Extraction stars The God of Thunder, Chris Hemsworth has been released and it has created quite some buzz on social media. All things considered, it had some buzz leading up to the release due to the creative team behind the film.

Extraction is based on the novel Ciudad by Ande Parks and follows black market mercenary Tyler Rake (Chris Hemsworth) as he is recruited by mercenary Nik Khan (Golshitef Farahani) to rescue the kidnapped son of India’s biggest drug lord Ovi Mahajan Sr. That’s where the plot of the story starts and ends. And while that might seem a bit like a turn-off, it really isn’t.

Despite the “lack of story” the long action pieces and the performances from Chris Hemsworth and his supporting Hollywood and Bollywood stars really carry the film and deliver some of the best action sequences in an action film since John Wick arrived on the scene. Which should be a good thing since we don’t get these kinds of action-thrillers that often.

I want to really tackle the aspect of a lack of story. While the film itself doesn’t expound on a backstory for the characters you meet. Nor does it focus on world-building (it doesn’t need to honestly). The lack of that aspect of character development isn’t necessarily detrimental to the overall film. As I mentioned above the performances from both the lead stars and the supporting cast members, on top of the high-paced action and the overall cinematography of the film is what truly elevates it and separates this film from the others.

In Lue of that, there is enough character development to makes us grow some sort of care and interest for Tyler Rake and Ovi Mahajan Jr. Tyler and Ovi throughout their adventure in the film do grow some sort of connection and a level of care for each other. It’s a life and death situation with every turn they take, and it is extremely intense! So it would only make sense to build these characters up and create a bond due to the circumstances they have to tackle.

Ovi becomes empathetic in regards to Tyler and Tyler finds a way to sort of redeem himself from the guilt he’s been feeling from not being able to see his son prior to his death due to lymphoma. Throughout the film, we get glimpses of Tyler’s son whenever Tyler is feeling down or searching for a sense of inner purpose to keep this mission going. And this is the kind of character and story development a lot of folks seemed to have missed.

Even characters like Saju played by Randeep Hooda have some sort of story and character development in his quest to bring Ovi Mahajan Sr’s son back to him. As you’re watching the film, he is presented as an antagonist to Tyler. After a 12-minute one-shot car chase sequence and a few rounds of brutal fisticuffs. All super thrilling and intense. Including the one-on-one knife fight on the street was spectacular as well.

Saju and Tyler find themselves on common grounds and facing one common enemy. Look at it this way, the enemy of my enemy is my friend and that’s how this team is formed. Both Tyler and Saju are played by Ovi Sr. when he fails to pay Tyler what he hired him for. While the safety of Saju’s son and wife is threatened if Ovi Jr. isn’t brought back to Ovi Sr.

Circling back to the car chase and action pieces between Tyler and Saju. The way they were shot, to the way they were edited and how the little intricate details like Tyler avoiding a swing of his blade due to a civilian on a moped driving in between the fight. All interwoven together was just great filmmaking, great stunt-coordination, and cinematography all around. It’s little things like this that truly make or break action films; and just films in general.

It’s storytelling without actually telling the story. Actions speak louder than words and that phrase couldn’t have been more true in this film as all the events unfold even until the ending moments of the film.

Extraction is a great mix of Hollywood and Bollywood and filming the film in India really helps with that too. The close-quarters combat due to the small living and city places keeps you on the edge of your seat. Thus making this film an incredibly fun watch.

The ending of the film leaves a lot to question. After successfully getting Ovi Mahajan Jr. to safety. Tyler Rakes is shot in the neck and it appears to be a fatal wound. As Tyler holds on to what little life he has left, he gives Ovi one final sense of acknowledgment as he throws himself over the bridge and into the water. Giving us a much sadder version of his high dive into the depths of the water from the beginning of the film.

Eight months later, Ovi Mahajan Jr. is in a new school, presumably in the states. He is seen at a pool and performing a high dive and just like Tyler at the beginning of the film, he takes a moment to meditate under the water. As he submerges from the water, we see a man standing by the pool, and that man is presumed to be Tyler Rakes. Although it is not really confirmed.

But the film does end in an open-ended fashion, leaving us to question and potentially hopeful for a sequel.

For more news, reviews, and updates on the latest films, make sure to keep it locked right here at The Nerdy Basement.

Extraction is a high-octane action-thriller that keeps you on the edge of your seat despite the lack of exposition. From it's leading to supporting cast, the film is carried by them making it an extremely fun watch.

Osvaldo MaderaApril 25, 2020Extraction is a high-octane action-thriller that keeps you on the edge of your seat despite the lack of exposition. From it's leading to supporting cast, the film is carried by them making it an extremely fun watch.9.0110
Your RatingUser Rating: 1.6 ( 1 Votes )
Share