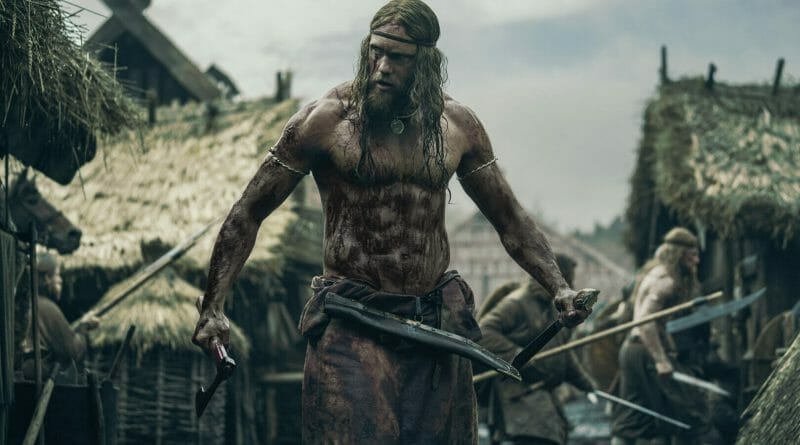 
‘The Northman’ is nothing short of epic and Robert Eggers’ best work to date!

Robert Eggers’s latest feature ‘The Northman’ has finally hit theaters, distributed by Focus Features, the film stars the heavily underrated Alexander Skarsgård, the great Willem Dafoe, Ethan Hawke, Bjork, Nicole Kidman, and the ever so talented Anya Taylor-Joy. With a star-studded cast like this one, paired with a constantly improving, visionary director like Robert Eggers and you’re in for a fully immersive experience when watching ‘The Northman’ in theaters this weekend.

‘The Northman’ follows the story of Amleth (played by Oscar Novak/Alexander Skarsgård), who flees his home after watching his uncle Fjolnir (Claes Bang) kill his father King Aurvandill (Ethan Hawke), kidnap and hold his mother Queen Gudrún (Nicole Kidman) hostage. Amleth spends years away from home, swearing an oath to return to his homeland to avenge his father, save his mother, and kill his uncle.

‘The Northman’ was always on my radar, I mean, who doesn’t like a Viking story rooted in Norse mythology? But I did not quite know what I was in for when I walked into my theater to watch this film. I knew the cast was going to put on one hell of a performance and that the fight sequences would be heavy and bloody but even that is an understatement to what truly unfolds in this film.

From the very opening moments of the film, you are fully captivated by the film’s soundtracks, visuals, and performances. While ‘The Northman’ is your typical revenge story, based on the story that eventually went on to inspire the story of Hamlet, there is something so nuanced about this film that truly goes beyond the status quo. Equal parts personifying actual Vikings and Norse mythology sprinkled with a bit of Conan the Barbarian, Eggers, and company find the perfect balance to a dish best served hot.

If you’re not familiar with Norse mythology do not fret, Eggars makes it make sense as the mythology is explored throughout the film in an accessible way. With appearances by Odin, a Valkyrie, Valhalla, and a few other things in between. You’re not thrown for a loop or will feel blindsided by the inclusion of Viking/Norse lore/mythology. It’s all laid out bare and it is easy to follow and things that would need some time to be explained are explained visually and through the characters of the film themselves.

Other films just expect you to know these things and there are moments in this film that may feel that way, like Odin’s appearance and his two ravens, Huginn and Muninn. Everyone should know the meaning behind their appearances by this point, we’ve all seen Thor, right? So the film doesn’t go out of its way to explain Odin’s appearance or the appearance of his ravens because they aren’t needed. Again removing the need to make the audience feel clueless and take them out of the film completely.

Another instance is when Amleth is brought to the brink of death and we see a Valkyrie approaching the gates of Valhalla, for those in the know, immediately know what this scene represents. For those who do not, Olga and Amleth, explain the scene through a brief exchange of words before sharing a tender moment. Little moments like these and attention to the details in the care of audience engagement go a very long way for Eggers, the film, and the audience as a whole.

Story and mythology aside, the film is a visual feast! Something that is always expected in a Robert Eggers film. Eggers does a wonderful job giving us captivating shots of Ireland’s landscapes and mountain ranges, down to its river banks and volcanic terrain, every shot is frame-worthy. Eggers also does a spectacular job bringing an entrancing visual scope to the mythical side of the film when exploring the film’s mythology. As mentioned above, seeing the likes of Odin, his ravens, a Valkyrie, Valhalla, and the King Tree (Yggdrasil), it’s all visually captivating and engaging.

The film’s cast takes what many may and probably will consider your typical revenge story and elevate it. Anya Taylor-Joy compliments Alexander Skarsgård onscreen so well. Anya serves as not just his love interest but also his North Star, in a sense. Doing her absolute best to work alongside him and also steer him straight. She keeps him level-headed and ultimately motivated despite his sacrificial choice near the end of the third act of the film.

Ethan Hawke and Willem Dafoe do what they do best with the little that they’re given to work within this film. Hawke serves his purpose as the catalyst and motivational drive for Amleth, and Dafoe’s devoted Heimir was the perfect character for him to play in this film. Dafoe just has that lunatic side of him that was truly befitting to what he needed to do as Heimir in this film.

‘The Northman’ has many standouts in terms of its main cast and supporting cast, however, Claes Bang, Nicole Kidman, and Alexander Skarsgård put on a clinic in terms of performances; with Nicole Kidman having such a powerful monologue that is nothing less of a masterclass in acting; further cementing her as one of Hollywood’s most iconic actors. This scene, in particular, is a near scene-stealer, if not, a total scene-stealer as she overshadows Skarsgård in the best way possible.

Alexander Skarsgård is no slouch and as I mentioned above, a truly underrated actor. He channels this Beastiality with this role. It’s powerful, intimidating, and brutal. Something I haven’t seen the soft-spoken actor channel in any film he’s done; not even in ‘The Legend of Tarzan’. As seen in many of the trailers and tv spots, that hunched over, thirst for blood that’s only quenched when someone’s throat is cut open is truly felt throughout by Skarsgård. If might even go as far as to say that this is his best role to date.

One of the most memorable things for me about this film was the film’s score, composed by Robin Carolan and Sebastian Gainsborough. Everything about it is heart-pounding, mythical, euphoric, and exciting. It’s one of those soundtracks that hits hard and leaves an actual mark on you. Making you feel every scene that much more and elevating the film as a whole that much higher. Whether it was during an action sequence, a ritual, a supernatural moment, or even the film’s final battle, the score had this unyielding grip that was nothing less than powerful.

When it’s all said and done, ‘The Northman’ is a visually stunning timepiece that is meticulously crafted and intricately paced. The film holds you with an unyielding grip and its heart-pounding score, with the bloody action to match. A layered story that shines with its star-studded cast. It is nothing short of epic and Robert Eggers’ best work to date.

‘The Northman’ is now playing in theaters.