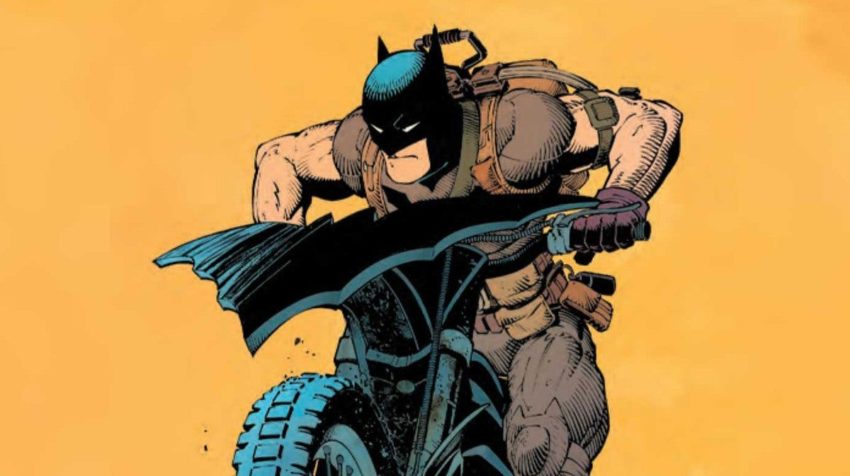 Just last week we got our first look at Robert Pattinson suited up as The Batman. While it wasn’t a full Batsuit reveal, it was more than enough to get Batfans excited for the upcoming film. As we mentioned in our report when director Matt Reeves released the Batsuit camera test. This was a way to get ahead of any leaked set pics that would start popping up online as they started filming with the Batsuit. A move that was also done by Joker director Todd Phillips prior to having Joaquin Phoenix on set suited up as the Clown Prince of Crime.

Take a look at the Batsuit below. Keep in mind that this is only a stunt suit and will not look like this in the final product.

One of the most notable features of the Batsuit (and the Batcycle) is that it holds a heavy resemblance to Scott Snyder’s Batman: Zero Year storyline.

It seems like the Batsuit itself will be an amalgam of Batsuits, taking queues from Adam West’s Batsuit, Rocksteady’s Arkham Batsuit, and Scott Snyder’s Zero Year’s early Batsuit. Based on the goggles, it looks like we might finally be getting those iconic white eyes we’ve all been asking for.

After Fox successfully pulled off the white eyes with Deadpool, which was followed up by Marvel Studios with Spider-Man. Fans have been expecting to see Batman finally don those white eyes to give him that definitive Batman look in live-action. It looks like Matt Reeves and company might just deliver. It is not clear whether or not that is Zoe Kravitz’s Catwoman on the second cycle but based on a couple of these images we can assume that it is.

With production on The Batman in full-swing and set photos of the full Batsuit already making their way online. We should start expecting to see more set photos and videos (there’s one out there already) in the coming weeks.

The Batman stars Robert Pattinson as Bruce Wayne/Batman, Zoe Kravitz as Selina Kyle/Catwoman, Paul Dano as The Riddler, Colin Farrell as The Penguin, Jeffrey Wright as Commissioner Gordon and is directed by Matt Reeves. The Batman arrives in theaters on June 25, 2021.